Most accurate deep ball passers in 2017

The 2017 NFL season saw many top notch performances under center, and most noticeably saw a new, old cast of characters who threw the deep ball extremely well this past season. Using our PFF signature stat ‘adjusted completion percentage,' which accounts for dropped passes, throwaways and passes in which the quarterback was hit as he throws, the following quarterbacks were the most accurate on throws targeted 20 yards or more past the line of scrimmage this season. 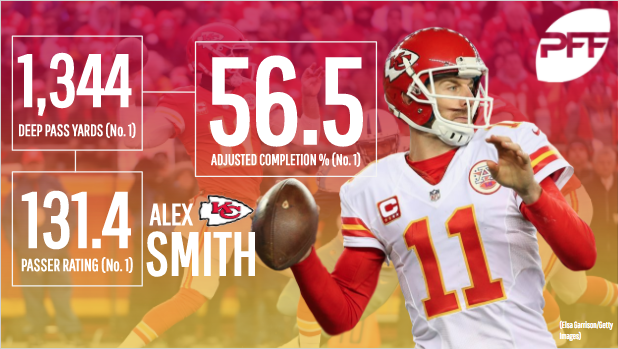 One of the surprises of the season, Smith became the league’s most efficient deep thrower, finishing first in adjusted completion percentage and yards while tying for first with 12 touchdowns. After generally ranking near the bottom in deep passing attempts in year's past, a more aggressive approach had Smith ranked 11th with 12.3 percent of his attempts going deep this season. All told, it helped to pay off as he posted career-high PFF grade.

The Saints took a more conservative approach on offense this season, but when they went down the field, Brees was his usual, accurate self. He floated a few deep passes early in the season, but he got back on track and hit seam routes and touch throws to the tune of the second-highest adjusted completion percentage on deep shots, and a 103.3 passer rating that ranked eighth.

The emergence of WR Robby Anderson as a deep threat coincided with McCown’s pass production as they connected often during the second half of the year. McCown exceeded expectations this season and did a fine job of putting the ball in places where his receivers could make plays. He only ranked 22nd in deep pass attempt percentage at 11.3 percent, but he made the most of his opportunities.

For the second year in a row, Prescott did not take many downfield shots, but he continues to show the ability to throw with good ball location to allow for big plays. He ranked just 27th in deep pass attempt percentage at 8.8 percent, and it’s likely time for the Cowboys to open things up for Prescott in the coming years.