Reports this offseason have said the Miami Dolphins’ want to play former first-round pick Minkah Fitzpatrick at safety long-term but will play a multi-faceted role in new head coach Brian Flores’ defense in 2019.

It doesn’t need to be that complicated.

Turning Fitzpatrick into a Swiss army knife in 2019 and a deep safety in years following will take him away from what has been his best position over the past four years: slot cornerback. He earned an impressive 79.3 overall grade and a 76.7 coverage grade across his 379 snaps in the slot this past season.  Among the 34 defensive players with 200 or more coverage snaps in the slot last season, he ranked first in completion percentage allowed (51.3%), first in passer rating allowed (53.4) and tied for ninth in coverage grade (76.7). 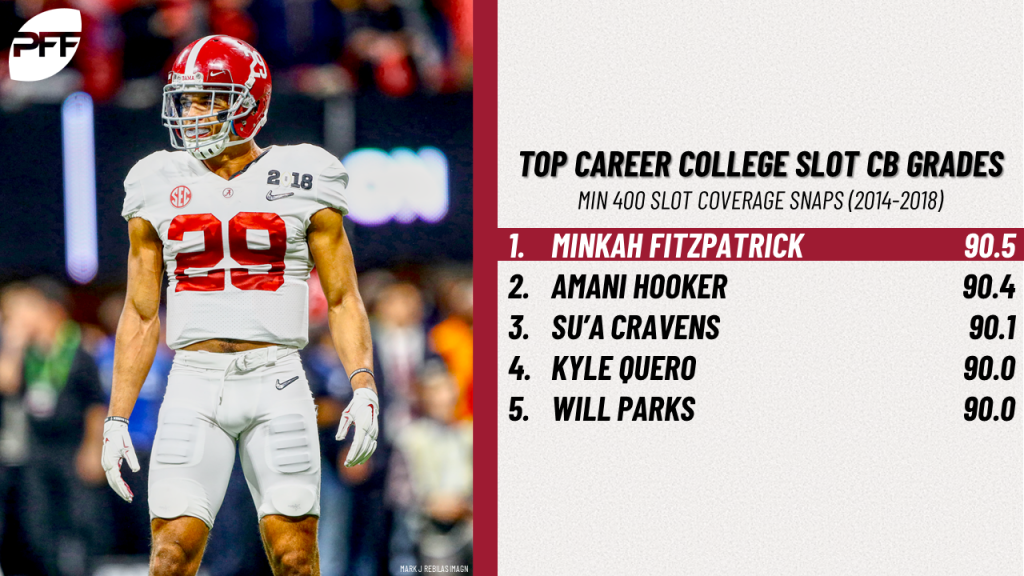 And Fitzpatrick’s slot success in the NFL is merely par for the course.

In his three-year career at ‘Bama, Fitzpatrick played a majority (66.3%) of his defensive snaps at slot cornerback and, much like his debut NFL season, played his best football at the position. His 90.5 coverage grade in the slot is currently the highest ever recorded among the 93 Power 5 defenders with 400 or more slot coverage snaps in the PFF College era (2014-18). He was truly in a league of his own playing slot cornerback at the college level, allowing just a 67.2 passer rating and 0.90 yards per coverage snap across a whopping 872 slot coverage snaps and 145 targets.

Not only has his best football all come at slot cornerback, but Fitzpatrick’s play elsewhere shouldn’t push anyone to switch things up. He earned sub 60.0 overall and coverage grades at outside cornerback, free safety and box* in 2018, all while playing 90 or more defensive snaps at each of the positions.

[Editor’s Note*: In Premium Stats 2.0, which is made available to all of PFF’s ELITE subscribers, defensive snaps played at off-ball linebacker or strong safety are labeled as “Box” snaps.]

Tuscaloosa saw no different, as Fitzpatrick didn’t earn an overall or coverage grade above 78.0 at any of the three positions in Alabama’s defense.

It’s not that Fitzpatrick isn’t versatile. The 6-foot-1, 202-pounder has all the tools necessary to hold his own at nearly any defensive position with added experience. He’s just really good at a slot cornerback position that has increased in value significantly in recent years.

“During the PFF era, throwing to slot receivers has been worth approximately 0.243 expected points added (EPA), while throwing to outside receivers has yielded only 0.228 EPA. When looking at the distribution of these throws, the difference becomes even larger, with the median EPA throwing to guys out of the slot being 0.200, as opposed to 0.130 for outside guys. Thus, throwing to inside receivers is not only a better play, it’s a safer play for offenses (and hence defending such a play well comes at a premium for a defense).” – PFF’s Eric Eager & George Chahrouri, March 2018

NFL offenses used three or more wide receivers in 2018 nearly twice as often as they did in 2008. The offensive shift is forcing defenses to adapt and add a fifth defensive back – the slot cornerback – to play a significant role. In turn, the league average for base personnel on defense dropped to just 25% in 2018, turning primary slot cornerbacks like Desmond King II, Kendall Fuller, Justin Coleman and now Fitzpatrick into starters – not rotational players.

Miami’s interest in moving Fitzpatrick to safety or a hybrid role is unwarranted. The 22-year-old budding star has more than proven his worth at slot cornerback and wants to have his position defined after playing a mix of three positions as a rookie.