Lorenzo Alexander has found the fountain of youth, leads all edge defenders in overall grade

Lorenzo Alexander is quietly having the best season among all NFL edge defenders, and he is doing so at age 35. The veteran has found the so-called “fountain of youth” after signing with six different teams but only recording playing time with four throughout his 14-year career. The Buffalo Bills standout currently holds the highest grade among all edge defenders following a matchup against the Houston Texans where Alexander posted not only his highest grade of 2018 but the highest single-game grade of his career (92.7).

Alexander’s elite mark of 92.7 stemmed from various areas of his play Sunday, as he had as dominant of a stretch as one can have in a single game. He recorded two quarterback pressures, forcing a fumble on one and creating an interception on the other in back-to-back plays.

With 14:30 left in the third-quarter, Deshaun Watson and the Texans looked to build on their 10-point lead to put the game out of reach for the Bills. Alexander led a five-man rush aiming to put pressure on the young quarterback. The rush was nullified when Watson let go of the ball with a quick trigger as he targeted Keke Coutee across the middle of the field. Alexander leaped up, batted the ball up moments before he relentlessly snagged it out of the air, securing his first interception of the season and second in a Bills uniform.

The Bills’ 32nd-ranked offense has been quite underwhelming this season, but Pro Football Focus ranks Buffalo’s defense as a top-10 unit in the NFL with Alexander leading the way as the highest-graded player on the team. Buffalo has shown that they are comfortable dropping Alexander back in coverage, and opposing offenses will quickly learn not to target the 35-year old edge defender. Opposing quarterbacks have recorded a 34.5 passer rating when throwing in Alexander's direction. 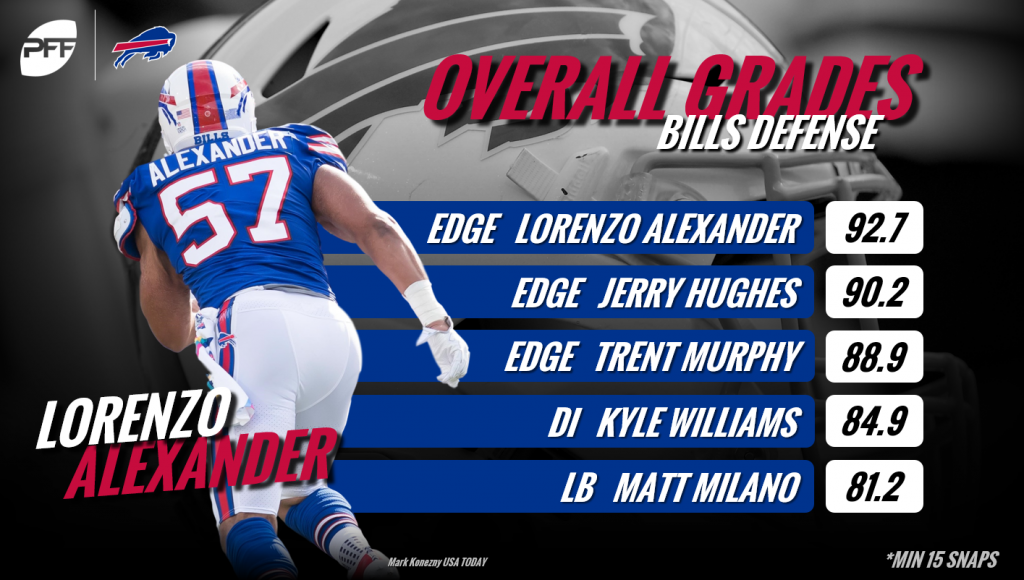 The edge defender position includes some of the league’s highest-paid players and has been solidified as one of the most valuable positions on the field. Alexander is making noise in his 2018 campaign, putting himself in the same echelon as Khalil Mack and DeMarcus Lawrence. The Bills edge defender ranks third in pass-rush productivity through Week 6, recording 18 quarterback pressures in 98 pass-rush attempts while only missing one tackle in his 196 defensive snaps.

Running the opposite edge of Alexander, Jerry Hughes leads the league in overall pass-rush grade (90.5) as well as the team in quarterback pressures (34). This duo is a force in the passing game when paired with 2017 Defensive Rookie of the Year candidate, cornerback Tre'Davious White, holding down the secondary.

Alexander has proven he can be the leader of the defense as well as a strong veteran presence on a team that is in the midst of a rebuild. It has only been six weeks, but the 35-year-old wily veteran has been the best edge defender in the NFL, impacting the game in every way possible. It is rare to see players that can keep up this sort of consistent production at this age, but for the time being, Alexander will continue to be a steal for the Bills.