Derwin James, Budda Baker – safeties on the rise in action in preseason Week 1

Slotted one spot above Rosen on PFF’s final 2018 Big Board at fifth overall, James is a world-class safety prospect with all the tools necessary to take the league by storm and never look back. Similarly, Rosen’s teammate Baker will kick off his second season in the NFL after a promising rookie campaign with Arizona a year ago. Both James and Baker enter the 2018 season with high expectations tied to their names, and meeting said expectations starts Sunday night.

Sidelined due to a hamstring injury early in camp, James has only recently started working with the Chargers first-team defense, but all signs point to the former Florida State standout earning the nod and playing significant snap totals for Los Angeles as a rookie.

Though expected to play a majority of his snaps at free safety with the Chargers, James is no one-trick pony when it comes defensive positioning. The 6-foot-2, 212-pounder played up and down the Seminoles’ defense in 2017, working as a moving chess piece capable of impacting the play at all levels. He played 69 defensive snaps along the edge of the line of scrimmage, 154 at off-ball linebacker, 188 at slot cornerback, 219 at strong safety and another 291 at free safety this past season – a true testament to his positional versatility and overall value. 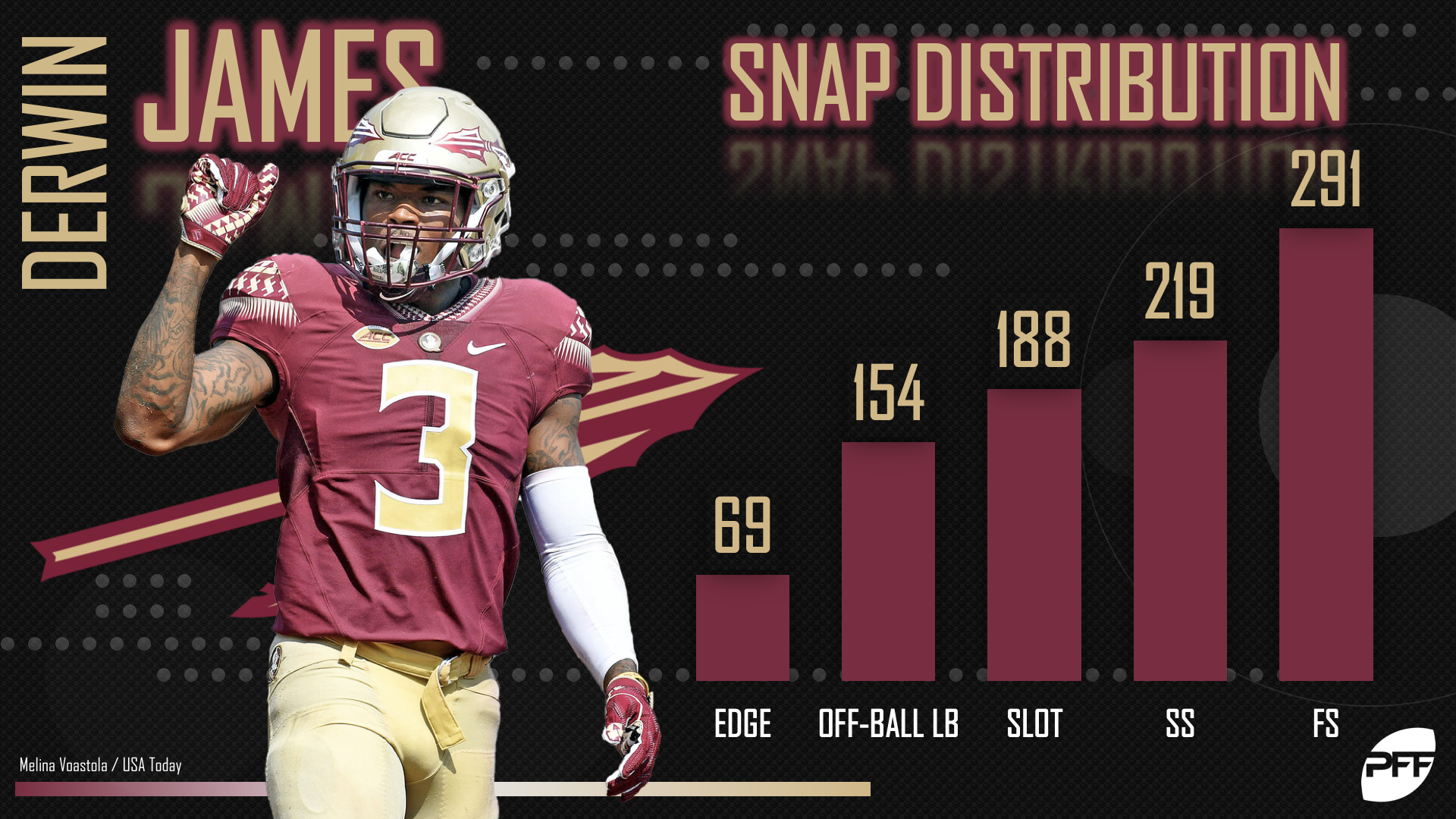 Working within his jack-of-all-trades role, James led all FBS safeties who logged at least 250 defensive snaps in defense grade (91.6) and coverage grade (91.9), while also finishing third in pass-rush grade (80.7) and 24th in run-defense grade (84.2).

Baker, like James, played a similar role for Arizona this past season, as he too played significant snap counts at multiple positions on the defensive side of the ball, a majority of which came at free safety (183), off-ball linebacker (133) and slot cornerback (106). He earned a 72.5 defense grade for his efforts, thriving specifically in run defense and pass-rushing situations.

Defending the run, Baker recorded 15 defensive stops across 172 run-defense snaps, ranking T-18th in run-stop percentage among qualifying safeties. He also earned an 86.4 run-defense grade, which ranked third among the same group of safeties. 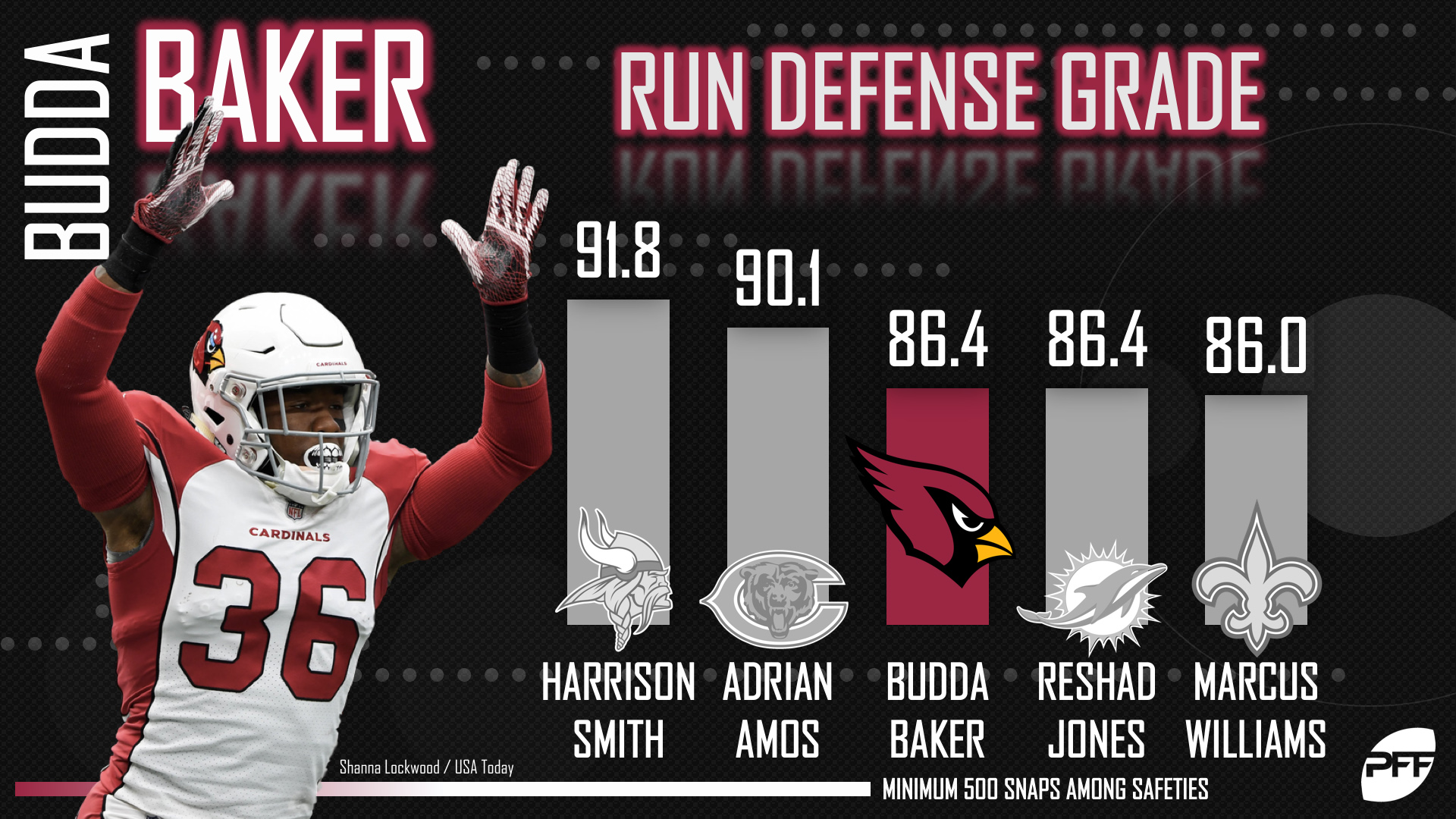 Though a bit smaller than James, Baker (5-foot-10, 194 pounds) had a knack for besting offensive tackles off the edge and getting to the quarterback. He totaled 11 pressures (eight hurries, two hits, one sack) across just 30 pass-rush snaps, ranking second in pass-rush grade (92.2) and win percentage (18.5 percent) among safeties with with at least 15 pass-rush snaps in 2017. PFF’s win percentage includes all earned pressures and any snaps where the defender beats his opposition while removing unblocked pressures.

James also excelled as a pass-rusher in his final collegiate season, as he recorded 10 total pressures (seven hurries, two hits, one sack) on 38 pass-rushes. He led all qualifying safeties in win percentage (26.3) and ranked third in pass-rush grade (80.7).

Baker and James, though both regarded for their great strengths, still have room to develop coming into this season. Baker struggled in coverage at times and missed too many tackles (eight total), while James must prove he’s fully recovered from his hamstring injury and that his play in college can indeed translate to the next level.

Of course, the road to improvement starts when the duo goes head to head in Glendale Sunday night.