The Jacksonville Jaguars entered the 2019 NFL Draft with multiple needs. Edge defender was not at the top of the list, but general manager David Caldwell found himself sitting at No. 7 overall with one of the best prospects in this year’s class still on the board.

With the Oakland Raiders taking Clelin Ferrell at No. 4 and the New York Giants selecting Daniel Jones at No. 6, Pro Football Focus’ fifth-best prospect, Josh Allen, fell into the lap of the Jaguars. It’s not as though Jacksonville was in need of an edge defender following the 2018 season, but as Senior Analyst Steve Palazzolo would say, it’s about drafting good players.

That’s exactly what the Jaguars did. Instead of focusing on need, Jacksonville took the best player available at No. 7 overall and only added value to one of the league’s best pass-rushing teams. 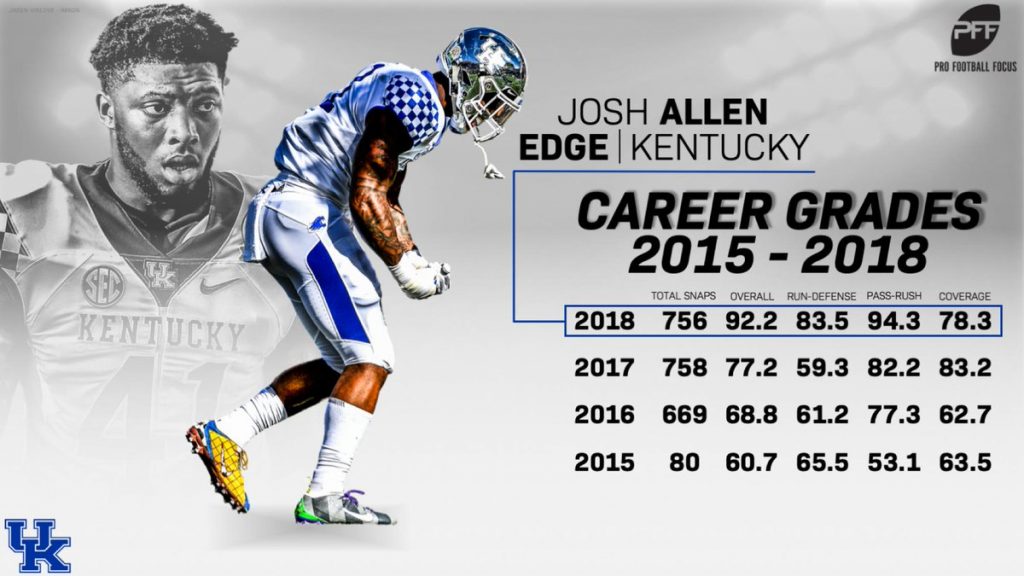 Calais Campbell recorded the highest overall grade (91.1) of any edge defender, while Yannick Ngakoue finished his second consecutive season with a top-20 pass-rushing grade among edge defenders. The two combined for 117 total pressures last season, but Allen won’t just be joining them in the AFC South.

The Jaguars used their 2017 first-round pick on Taven Bryan. In his rookie season, Bryan earned a 71.1 overall grade and recorded 12 pressures. Abry Jones continued to put in work for the interior, posting a 72.6 overall grade. In total, the Jaguars recorded 298 team pressures, placing them ninth among NFL teams during the 2018 regular season.

So where does Allen fit in? That’s the great part about Jacksonville’s defense. They continually rotate players, allowing Campbell, Ngakoue, Bryan, Lerentee McCray and Dawuane Smoot opportunities to get after the quarterback. In total, five different edge defenders saw at least 70-plus pass-rushing snaps, and that does not include Dante Fowler Jr., who was traded midseason to the Los Angeles Rams.

Having versatile players like Campbell and Bryan, who can be effective both on the inside and outside of the defensive line, only elevates the unit’s overall play. Bryan logged 98 of his 301 defensive snaps along the interior defensive line in his rookie season. Even Campbell, who dominated off the edge, saw 94 snaps from the interior.

While Jacksonville’s 2019 first-round pick is unlikely to see snaps along the interior defensive line, the rookie edge defender adds another versatile playmaker to the defense. Allen was known for getting after the quarterback in the SEC, racking up 57 pressures on 256 pass-rush snaps in his final season at Kentucky.

He improved his pass-rush grade with each season, finishing his college career as the highest-graded pass rusher (94.4) in the FBS. He will likely have to work his way onto the field, unlike fellow rookie edge defenders Nick Bosa and Brian Burns, but that should only emphasize the level of talent in Jacksonville’s front-four.

Allen also knows how to make the most of his snaps. The 6-foot-5, 262-pound edge defender recorded the best pass-rushing productivity (15.4) of any player in the 2019 NFL Draft with a minimum of 150 pass-rush snaps. PRP is a formula that combines sacks, hits and hurries relative to how many times a player rushes the passer.

His versatility opens the door for other players to rush the passer, such as off-ball linebacker Myles Jack. The former UCLA standout logged just 59 pass-rush snaps but recorded 13 total pressures and three sacks. Having an edge defender that can pick up a linebacker’s coverage assignment allows defensive coordinator Todd Wash the opportunity to keep offenses guessing where the rush will come from.

Allen brings the total package to the NFL. And while drafting him certainly didn’t fill a glaring need for Jacksonville, it undoubtedly improves an already talented pass-rushing team.