The Green Bay Packers have looked to remake their defense recently, adding key free agents like Za’Darius Smith and Adrian Amos, while spending high draft capital on players like Darnell Savage, Rashan Gary, Josh Jackson and Jaire Alexander. A lot of change is coming to the defensive unit, but one thing that should remain constant is the presence of Mike Daniels. 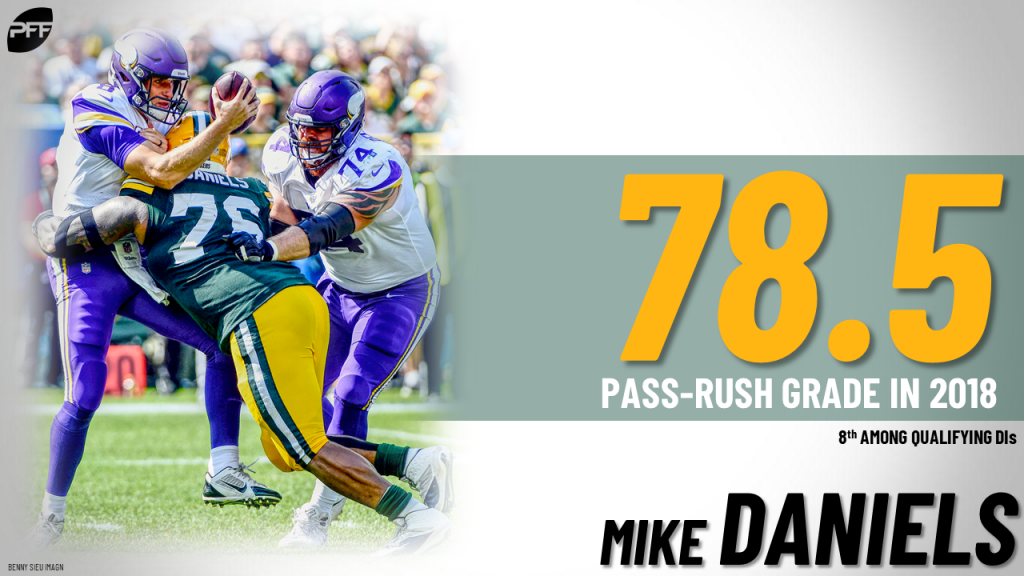 The veteran defensive interior had a down year last season by his standards, producing an overall grade of 71.3 and playing just 419 snaps after sustaining a season-ending foot injury against the Seattle Seahawks in Week 11. While Daniels was lackluster in some respects, finishing five of his 10 games with a run-defense grade under 60.0, he was still one of the league’s best pass-rushers last season. He finished with a 78.5 pass-rush grade and pass-rushing productivity of 7.3, which rank ninth and sixth among qualifying interior defensive linemen, respectively. His 17.4% pass-rush win rate when shaded or head up on the guards ranked sixth among qualifiers, as well.

The veteran defensive tackle has consistently anchored the defensive line at a high level for multiple seasons, generating the eighth-best pass-rush grade either head up or shaded on the guards in the last four seasons at 86.3. His pass-rush win rate of 14.4% from that alignment ranks sixth among qualifiers, as well. Daniels has been a model of consistency, producing an overall grade of 70.0 or higher in six of his seven seasons and a pass-rush grade of 70.0 or higher in his last four seasons. He has also been a plus run-defender, grading at 75.0 or above in five of his seven seasons.

Daniels provides Green Bay with a veteran presence that can mentor young emerging studs like Kenny Clark on the defensive line, and his ability to consistently produce at a high level takes attention away from Clark while complementing his play style.

Clark has really emerged playing next to Daniels, producing an exceptional 90.5 overall grade and 88.8 pass-rush grade last season. The fourth-year interior defensive lineman, much like Daniels, was dominant in the fourth quarter, where he produced a pass-rush grade of 90.2, which was second only to Fletcher Cox. Over the past four seasons, Clark has produced a top-five pass-rushing grade when either head up or shaded on the center, as well.

Daniels is in the last year of his contract, from which he will make $7.6 million in base salary, according to Over The Cap. There is talk that the Packers may choose to move on from the veteran defensive interior, but it would likely be in both parties’ interests to come to an agreement that works for both sides.

Green Bay has benefited from Daniels’ consistent production and high-level play, and he can only help the team by taking attention away from young players like Clark and Gary while mentoring them along the way. While many changes are coming to the Green Bay defense, Daniels should not be one of them.