Grading all 32 first rounders after Week 4

Week 4 of the NFL regular season schedule has been completed, giving us a larger sample size to delve into just how each of the 2018 NFL Draft first-round picks has fared in their respective action so far. Some of the 32 first-rounders have not qualified for a grade either based on small snap counts or not playing altogether. On the other hand, some players have jumped out of the screen and have helped strengthen their teams.

Through Week 4 of the 2018 season, here are how each of the 32 first-round rookies from the 2018 NFL Draft has graded in their first two weeks: 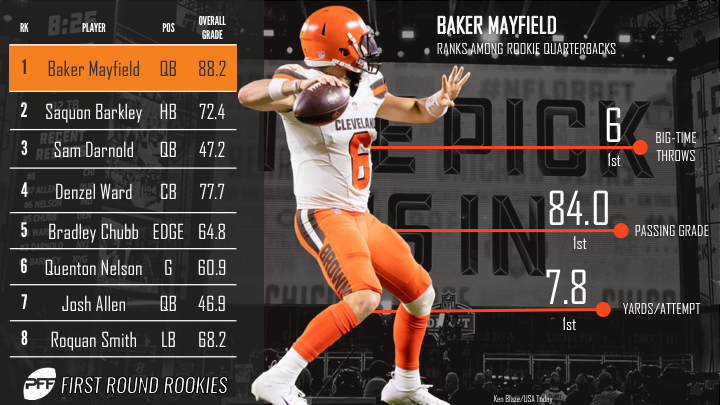 Mayfield followed up his historically great debut with another strong outing against the Oakland Raiders in Week 4. In his first career start, which so very nearly resulted in a Browns win, Mayfield completed 19 of his 34 pass attempts from a clean pocket for 273 yards, two touchdowns and two interceptions. While his turnovers may cause some alarm at first glance, the reality is that only one of those throws was his fault, as his first pick was the result of a dropped pass that rebounded into the hands of a defender. Mayfield has only attempted 64 attempts so far this season, which is 70 fewer than Josh Allen and 76 fewer than Sam Darnold, but despite throwing fewer passes, Mayfield still leads all rookie quarterbacks with six ‘big-time throws.'

Barkley's 72.4 overall grade currently ranks 15th among all qualifying players at the running back position, but his receiving grade of 80.9 puts him eighth among that same group. As impressive as Barkley has been on the ground over the first quarter of the season, Barkley has shone brightest as a receiver, catching 27 of his 28 catchable targets for 237 yards after the catch – the second-most among running backs.

Darnold is still going through some growing pains as he adjusts to life as an NFL quarterback. His standard has dipped every week since his regular season debut in Week 1, and his latest outing, Week 4 against the Jaguars, produced an overall game grade of just 36.9, the lowest of his career to date. Against a tough Jaguars defense, Darnold completed only 11 of his 23 attempts from a clean pocket, and he also made some bad decisions with the football and ended the game with two ‘turnover-worthy' passes next to his name.

It was business as usual for the rookie cornerback in Week 4 against the Raiders, and although his team didn't quite manage to end the game with a W, Ward can be pleased with his performance. He was targeted six times on the day but allowed only one catch for 28 yards.  Four games in, Ward has allowed 59.3% of the passes thrown into his coverage to be caught and has surrendered a passer rating of just 69.7 – the seventh-best mark among all cornerbacks with at least 20 targets.

The Broncos first-round pick added another four quarterback pressures to his record on Monday night against the Chiefs, which now brings his season total up to 15 – the most among rookie edge defenders. The Broncos have to be happy with the returns they see from Chubb, as he's not only putting pressure on the quarterback, he's also added five defensive stops against the run, which is tied for the most among first-year players at the position.