Grading all 32 first rounders after Week 1

The first full week of the NFL regular season schedule has been completed, giving us our first real look at this year's first-round rookies. While some of the 32 first-rounders saw plenty of action, others did not qualify for a grade either based on small snap counts or not playing altogether yet some rookies with large snap counts impressed.

Through Week 1 of the 2018 season, here are how each of the 32 first-round rookies from the 2018 NFL Draft has graded in their first professional action: 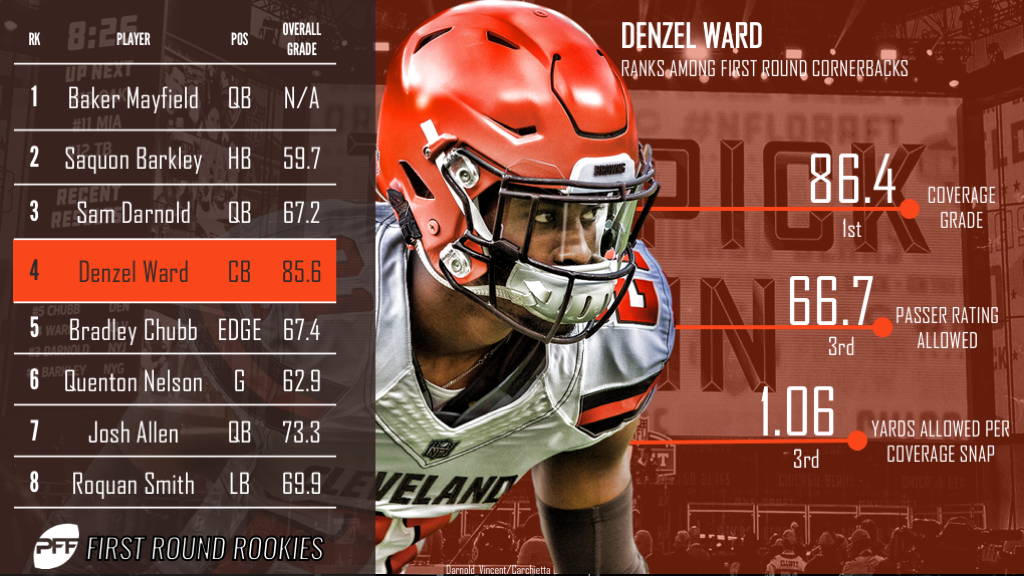 The Browns told us that Tyrod Taylor would start Week 1, and that's exactly what happened. However, in his first regular-season start for the Browns, Taylor struggled, and his performance will have done nothing to quieten those wanting Mayfield to start.

The Jaguars managed to subdue Barkley for a good portion of the afternoon, but he did have his moments, and sometimes, that's all he needs. He broke five tackles on 18 rushing attempts and averaged a mightily impressive 5.28 yards after contact per rushing attempt, the highest mark among backs with at least 15 carries.

The Sam Darnold era in New York started in the worst way possible on Monday night, when the rookie signal-caller threw his very first pass across the middle of the field into the waiting arms of safety Quandre Diggs, who returned the ill-advised pass for a touchdown. Darnold quickly recovered from his nightmare start and ended his regular season debut with an adjusted completion percentage of 85.0 percent, which was the fifth-best mark among quarterbacks this week.

Ward was a standout performer for the Browns defense on Sunday afternoon. During his team's regular-season opener, Ward played a colossal 81 snaps, the most among all rookie defenders. 50 of those snaps came in coverage, where he excelled, allowing just six receptions from 10 targets for 50 yards while breaking up one pass and intercepting another two.

Broncos fans were hoping for a big debut performance from edge-rusher Bradley Chubb, and that's exactly what they got. Working against the Seahawks' perennially permeable offensive line, Chubb racked up a sack, and six additional quarterback hurries on his 32 pass-rushing snaps.