SANTA CLARA, CA - AUGUST 23: Colin Kaepernick #7 and Blaine Gabbert #2 of the San Francisco 49ers stand on the sideline during the game against the Dallas Cowboys at Levi Stadium on August 23, 2015 in Santa Clara, California. The 49ers defeated the Cowboys 23-6. (Photo by Michael Zagaris/San Francisco 49ers/Getty Images)

Here are the top-graded players and biggest takeaways from the Packers' 21-10 win over the 49ers:

Aaron Rodgers looked a bit rusty in his first game this preseason. Rodgers was uncharacteristically inaccurate on many short throws, leaving his intended receivers without much of a chance to make a play on the ball. The raw statistics look fine (6-of-9 for 60 yards and one touchdown), but a few of his inaccurate throws were nullified by penalties. Rodgers’ one touchdown throw to Randall Cobb was a screen pass.

Three of the top five graded players on the Packer offense were starting offensive linemen. They helped starting running back Eddie Lacy rush for 45 yards on seven carries, moving the offense downfield. Neither Lacy nor James Starks finished with a positive rushing grade, showing that the line was the real reason for the success in the running game.

Both Blake Martinez and Nick Perry found themselves around the ball all night. Martinez finished with positive grades in pass defense, run defense and as a pass-rusher, while Perry had a run stop and two batted passes. Kyler Fackrell showed off his pass-rushing ability at the end of the game with two hurries.

Get the in-depth 2016 season preview for the Packers right here.

Blaine Gabbert and Colin Kaepernick both grade poorly in loss

Both 49ers quarterbacks struggled overall in this game. Blaine Gabbert started for the 49ers and did lead the team to a touchdown drive, but the key play was a cutback run by running Carlos Hyde to get them into the red zone. Gabbert’s TD throw was actually a lateral to wide receiver Quinton Patton. Kaepernick struggled to find a rhythm in this game, and was again plagued by poor pocket presence. He looked to scramble on third-and-long multiple times instead of looking to find a receiver.

The Niners' wide receivers weren't much help, either

Although neither of the two quarterbacks were putting passes right on the receivers, it's not as though the receivers were doing them any favors in return. Six of nine 49ers wide receivers finished with below-average grades, as they struggled to get open all night. Four of the top five graded players on offense were linemen, which doesn't say much for the team's skill positions.

Although the defensive line got pushed around a bit in run defense, the 49ers' inside linebackers graded well in run defense. Shayne Skov had four run stops and Gerald Hodges added two. Edge rushers Aaron Lynch and Corey Lemonier finished with the top two pass-rush grades in this game, with Lemonier generating three hurries on only seven rushes. That's a positive sign at a position of need for the Niners.

Get the in-depth 2016 season preview for the 49ers right here, complete with positional rankings. 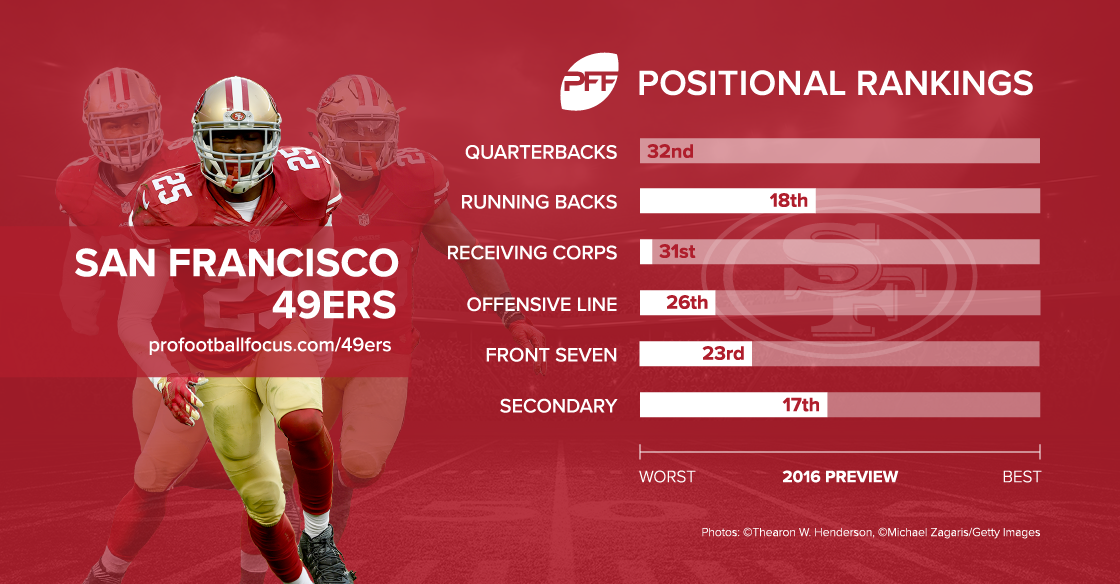