Fred Warner is the future at linebacker for San Francisco, and the future is bright

Reuben Foster earned the fifth-highest overall grade (81.2) by a rookie off-ball linebacker in the PFF era (2006-Present) just one year ago, falling just a few grade points shy of the man the San Francisco 49ers’ faithful hoped Foster could replace, Patrick Willis. That pipedream, of course, is all but forgotten with Foster’s release from the team, but a new suitor for Willis’ throne has surfaced in the wake of Foster’s fallout, and he’s here to stay.

Fred Warner, a rookie third-round pick out of BYU, took a lead role in the 49ers’ defense largely because of the injuries that plagued Foster at the start of the season, and he now leads the team’s defense in defensive snaps with 722 – 149 more than any other San Francisco defender. Yes, a third-round linebacker just months removed from squaring off against the likes of UMass and San Jose State has taken center stage of an NFL defense – and the stage has yet to prove too big for the former Cougar.

The 6-foot-3, 236-pound Warner came out of the gates on fire, earning an impressive 88.7 overall grade across 71 defensive snaps against the Minnesota Vikings in Week 1. He recorded two pressures, five defensive stops and allowed just 19 yards from five targets in coverage. Oh, and he forced a fumble.

Expected regression, however, went into full effect in the following weeks, as Warner produced sub-65.0 single-game grades in each of the 49ers’ next six games. His stop numbers dropped off, missed tackles piled up, and he was victimized in coverage largely due to inexperience. The 22-year-old rookie took a stand in Week 8, however, and has since rallied back from his sub-par performances to have one of the best four-game stretches in football. 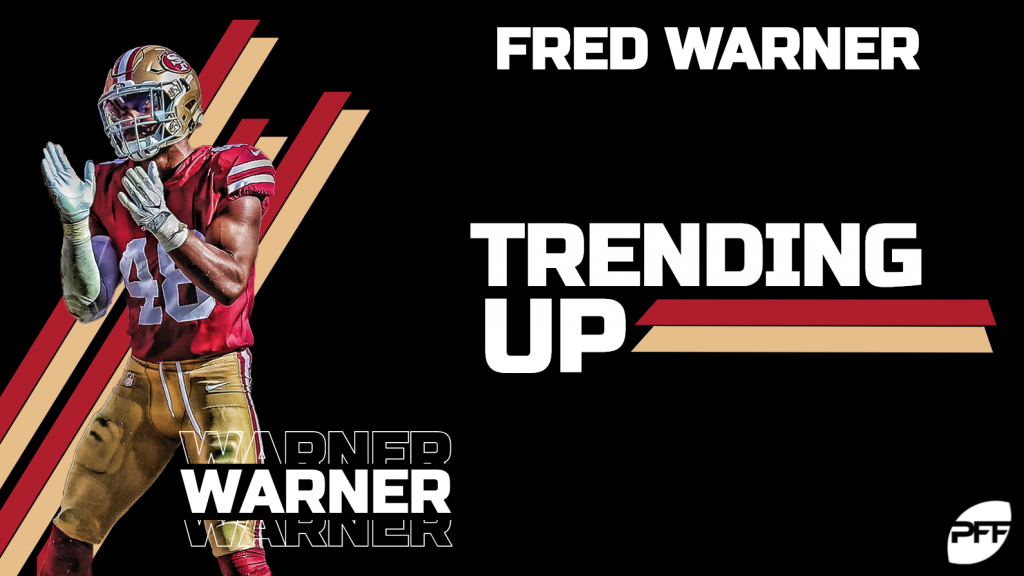 Among the 55 off-ball linebackers with at least 150 defensive snaps played in Weeks 8-12, Warner ranks third in overall grade (85.1) and, more impressively, first in coverage grade (88.6). Most recently, Warner earned an 86.9 single-game grade in the 49ers’ loss to the Tampa Bay Buccaneers, picking up two defensive stops and allowing just 13 yards in coverage in the process.

Warner has now earned 71.8-plus single-game grades in each of his previous four appearances, all of which largely propped up by excellent play in coverage.

In the same five-week span, Warner allowed just 95 yards in coverage across 136 defensive snaps and 18 targets. He ranked ninth in yards allowed per target (5.28) and first in forced incompletion percentage (22.2%) among the 56 off-ball linebackers with 75-plus coverage snaps in that span. He also allowed zero touchdowns and missed just one tackle in coverage through the four games.

Warner has been no slouch against the run, either. In addition to his favorable size, Warner has great closing speed and athleticism that allow him to fly to the ball and avoid second-level blocks. Though he ranks just 24th in run-defense grade (63.3) on the season, he ranks third among qualifiers in run-stop percentage at 10.7%.

While the run game is an area Warner can improve moving forward, his play in coverage more than makes up for his middle-of-the-pack play against the run. Talented coverage linebackers are as hard to come by as they are important in today’s NFL, and early returns point to Warner joining the league’s elite at the position with his ability to positively impact the passing game.