Five pending free agents bound to get overpaid this offseason

Death, taxes and NFL teams losing their minds in free agency. It’s a tale as old as time. Every offseason we see teams misevaluate talent from other teams and hand over the bag in free agency only to cut bait a few years down the line. We’re not saying the guys below are bad players by any means, but the public perception of them hasn’t always matched the grades.

The perfect recipe for an inflated contract in free agency is any high draft pick who has flashed elite play at some point in their career. Ever coach thinks they are the ones who will get that peak performance out of them even though Barr had no defensive slouch at the helm in Mike Zimmer.  After Barr’s All-Pro season in 2015, where he earned a 90.0 coverage grade, he’s earned coverage grades of 43.6, 59.6 and 59.9. There is some hope for Barr to reinvent himself as a pass-rusher – his primary position at UCLA – but that’s a big risk when handing out a big contract. 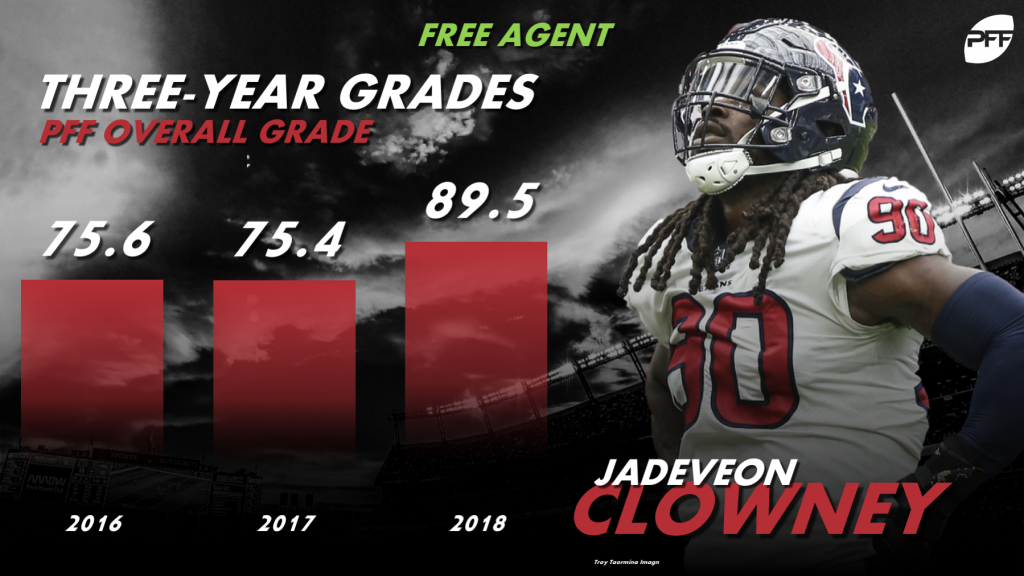 The aura surrounding Clowney has always been greater than his production on the field. In five seasons in the NFL, the Texans defender has never once earned a pass-rushing grade above 80.0. His 78.8 pass-rushing grade this past season was a career high. The 25-year old has certainly been trending in the right direction, but how much are you willing to pay a premium for his perceived upside down the road? 13 different edge defenders had higher pass-rushing grades a season ago, including five players also set to be free agents. He’s a movable chess piece that is dominant against the run, but he’s not close to Von Miller/Khalil Mack/J.J. Watt.

There’s no denying Brown exceeded many’s expectations this past season in New England, but there are a lot of reasons why I’d worry about valuing him as a top tackle this offseason. The first is that he was average by pretty much all of our metrics. He earned a 66.9 overall grade and ranked 30th out of 57 qualifying tackles in pass-blocking efficiency. The latter of which is undoubtedly helped by Tom Brady having the fifth-fastest average time to throw in the NFL. If Brown leaves New England and offensive line coach Dante Scarnecchia, I’m not sure you’ll see the same quality results. 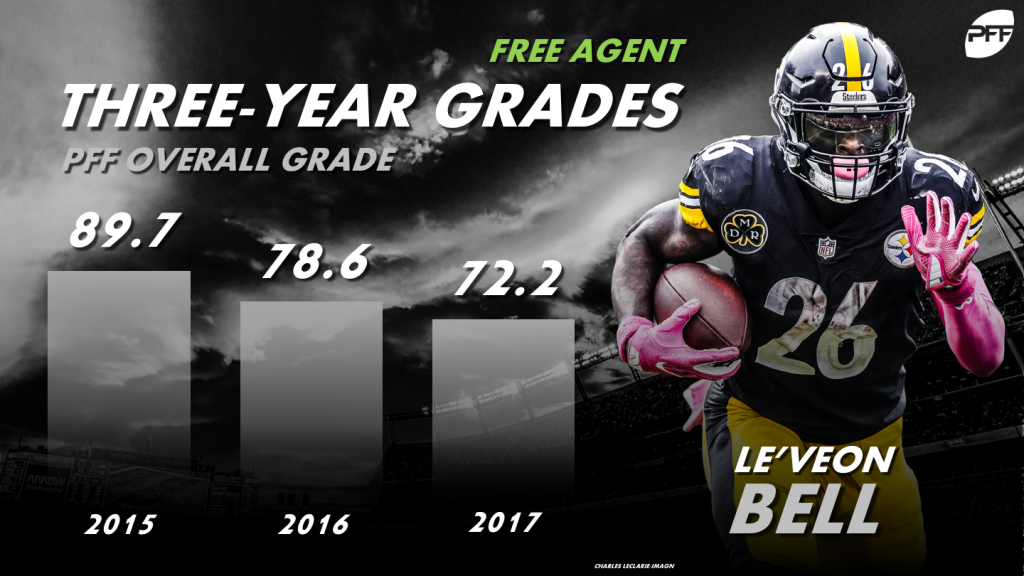 This has nothing to do with Bell’s talent, but rather how much value he can bring to the table. Bell’s best seasons also happened to coincide with the Steelers having top-ranked offensive lines by us here at PFF, which isn’t a coincidence. All our data points to run blocking being far more important to success on the ground than the running back, so if you’re a team looking to improve your ground game, paying Bell big money isn’t where you should start.

Roby has teased playmaking ability throughout his career as a nickel corner, but when he was finally given the reigns to the starting job in Denver this past season, he fell flat. He allowed career highs in passer rating allowed (117.3) and catch rate (65.9 percent) while breaking up six fewer passes (9) than he did a season ago (15). He also had three separate outings where he allowed at least 100 yards. While the high-level traits are there, that’s concerning production for a big contract.

[Editor's Note: To dive into PFF's grades and advanced stats yourself, subscribe to ELITE – Annual or ELITE – Monthly subscriptions.]