NFL training camps across the nation will soon have players competing all over the field for a starting job for their respective teams. Whether it be rookies or veteran free agents looking to dethrone incumbents or fill a vacancy, the competition will be rampant. If you’re a fan of the Buffalo Bills, something you’ll surely be paying attention to is the battle to claim a spot on the offensive line — an area that’s clearly been a focus for the Bills since free agency opened this offseason.

With the departures of Jordan Mills, John Miller and Ryan Groy — who combined for 2,428 offensive snaps last season — and a slew of additions this offseason, Buffalo’s offensive line will undoubtedly look different in 2019.

Entering camp, here are the players who will be competing for a job: 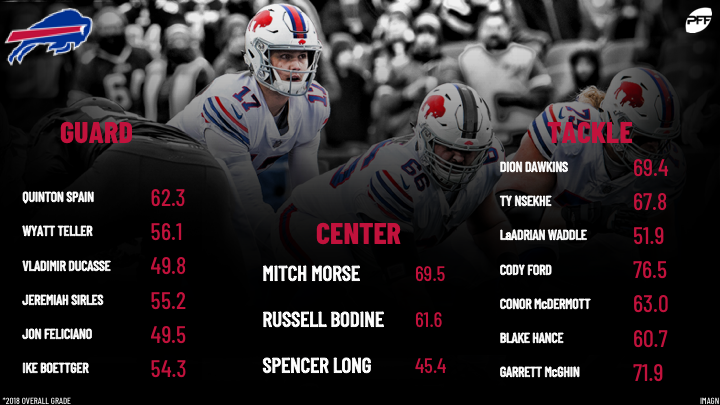 Today we’re going to use the PFF database to break down these 16 guys and highlight what they’ve done up to this point in their football careers. While some guys certainly have a leg up when it comes to landing one of those five starting jobs (looking at you Dion Dawkins and Mitch Morse), we aren’t going to speculate as to who will ultimately win those five jobs. Bills fans, bookmark this page and use it as a glossary come training camp time.

Morse signed a four-year, $44.5 million contract with over $20 million of that being guaranteed this offseason after spending the first four seasons with the Kansas City Chiefs. Morse ranked 12th among centers last season with a 69.5 overall grade and his best season so far as a pro came back in 2016 when he earned a 74.6 overall grade across 1,075 offensive snaps.

Out of the 42 centers who’ve seen at least 1,000 offensive snaps over the past three seasons, Morse ranks 15th with a 72.9 overall grade across that stretch, and his 99.0 pass-blocking efficiency rating is tied with Travis Frederick for second-best.

Bodine is entering his second season with Buffalo. He signed a two-year, $5 million contract with the Bills last offseason after spending the first four seasons of his career with the Cincinnati Bengals. He logged 588 offensive snaps for the Bills last season — seeing all of them at center — and he finished the year ranked 18th among centers with a 61.6 overall grade.

Bodine’s best season as a pro so far also came back in 2016; he finished that season with a 69.5 overall grade across 1,060 offensive snaps for the Bengals. Out of those 42 centers who’ve seen at least 1,000 offensive snaps since the start of 2016, Bodine ranks 19th with a 68.1 overall grade over that stretch, and his 97.8 pass-blocking efficiency ranks 27th.

Long signed a three-year, $12.6 million contract this offseason after spending time with both the Washington Redskins and the New York Jets. Long saw 826 offensive snaps last season for the Jets, splitting time between center (507 snaps) and left guard (319 snaps). Unfortunately, he didn’t fare too well at either position in 2018, finishing the year with a 41.1 overall grade as a center (which ranked 38th out of 38 qualifying centers) to go with a 56.5 overall grade when playing left guard (which ranked 53rd out of 78 qualifying guards).

Long’s best season to date came back in 2015 — that season he saw all but one of his 919 offensive snaps at left guard — when he earned an 80.4 overall grade.

Spain signed a one-year, $2.05 million contract with Buffalo this offseason after spending his previous four seasons with the Tennessee Titans. Spain ranked 35th out of 77 qualified guards last season with a 62.3 overall grade and his best season thus far came back in 2016 when he earned an 84.2 overall grade across 821 offensive snaps. The four-year veteran has spent 99.4% of his career snaps at left guard.

Over the past three seasons, Spain ranks 23rd out of 86 guards who saw at least 1,000 offensive snaps over that stretch with a 72.9 overall grade, and his 97.3 pass-blocking efficiency ranks 39th.

Teller is entering his second NFL season after Buffalo picked him in the fifth round of the 2018 draft. Teller saw 483 offensive snaps during his rookie season, with 471 of those coming at left guard and the other 12 coming at right guard. The NFL sophomore ranked 55th out of 77 qualified guards last season with a 56.1 overall grade, and he fared much better in pass protection (78.3 pass-blocking grade) than he did as a run-blocker (49.0 run-blocking grade). Teller earned a grade of at least 65.0 in three of the eight games he played in last season, but he was never able to surpass the 70.0 mark.

Ducasse is entering the final year of a three-year, $3.5 million contract he signed with Buffalo back in the 2017 offseason. The eight-year veteran has also spent time with the Baltimore Ravens, Chicago Bears, Minnesota Vikings and New York Jets. He spent his first season in Buffalo exclusively playing right guard, but last season he switched sides of the line and only played left guard.

Ducasse struggled last season for the Bills. He finished the season ranked 65th out of 77 qualifying guards with just a 49.8 overall grade, and he was brutal as a run-blocker, where his 38.5 grade ranked dead last. Those struggles weren’t limited to just last season either; among 86 guards who’ve seen at least 1,000 offensive snaps over the past three seasons, Ducasse ranks 73rd with a 51.5 run-blocking grade over that stretch.

Despite the run-blocking issues, Ducasse has held his own in pass protection. The veteran lineman ranked 18th among guards with a 79.0 pass-blocking grade in 2018, and over the past three seasons, his 97.5 pass-blocking efficiency is tied for 27th among guards.

Sirles re-signed with the Bills this offseason on a one-year deal worth the veteran minimum. Sirles has also played for the Carolina Panthers, Minnesota Vikings and Los Angeles Chargers (then San Diego). Sirles earned a 55.2 overall grade across 140 offensive snaps for Buffalo in 2018. He made one start (Week 13 at the Miami Dolphins) in which he posted a 46.2 overall grade over 66 snaps. Sirles has NFL experience at both guard spots along with right tackle, a position he saw 647 snaps at for the Vikings back in 2016 (he posted a 64.2 overall grade that season).

Sirles has struggled quite a bit in pass protection at the NFL level, surrendering an 8.8% pressure rate throughout his career. For comparison, that rate ranks 90th among guards over the past three seasons, and it ranks 69th among tackles.

Feliciano signed a two-year, $7.25 million contract with Buffalo this offseason after spending his first four seasons with the Oakland Raiders. Feliciano earned just a 49.5 overall grade across 227 offensive snaps last season, the most snaps he’s seen in any season of his career thus far. In total, Feliciano has earned a 57.9 overall grade across 590 offensive snaps as an NFL player.

Boettger joined Buffalo as an undrafted free agent last offseason. During his rookie season, he saw just 76 offensive snaps, earning a 54.3 overall grade across them. Boettger was a four-year player at the University of Iowa, spending most of his time at right tackle but also seeing snaps at left tackle and left guard. Boettger earned a 79.3 overall grade during his four seasons at Iowa, the 35th best grade out of 147 power 5 tackles who played at least 1,200 offensive snaps over that stretch.

Nsekhe signed a two-year contract worth up to $13 million with Buffalo this offseason after spending the past four seasons with the Washington Redskins. Nsekhe ranked 43rd among qualified tackles in 2018 with a 67.8 overall grade, and he was one of just 11 tackles to have both a pass-blocking and run-blocking grade north of 70.0.

Over the past three seasons, Nsekhe has played ample amounts of right tackle (132 snaps), left guard (203 snaps) and left tackle (721 snaps). During that stretch, there were 48 players who logged at least 600 snaps from the left tackle position, and among that group, Nsekhe ranked 24th with a 75.2 overall grade while his 96.4 pass-blocking efficiency also ranked 24th. 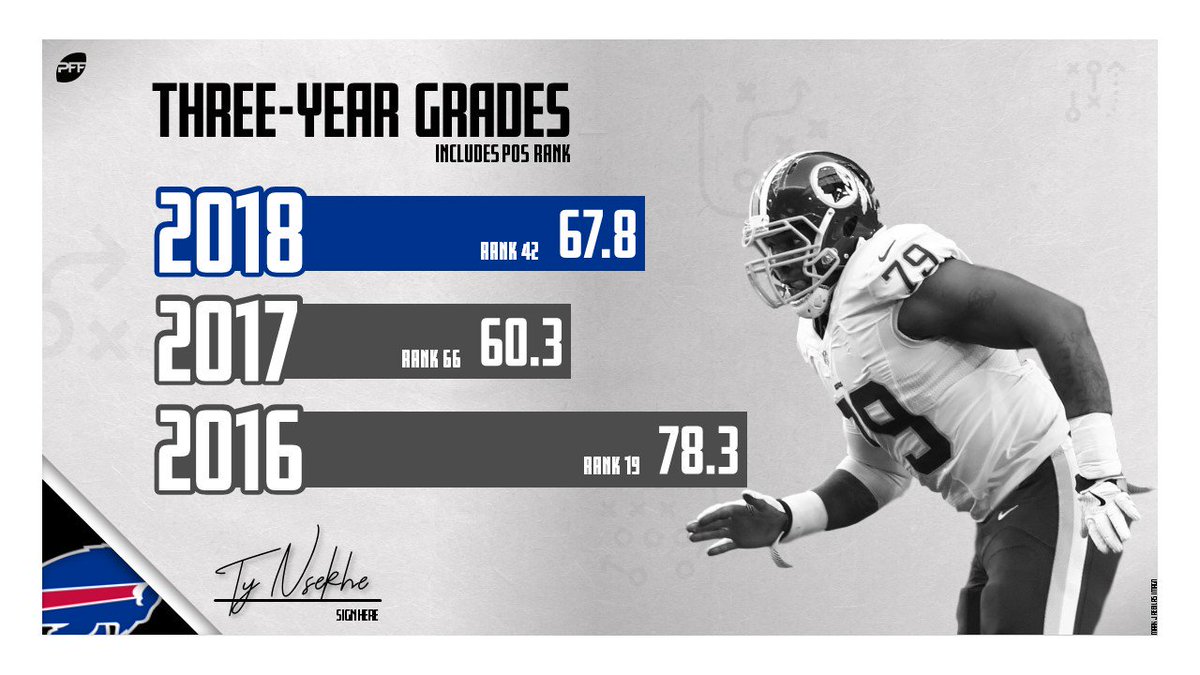 Dawkins is entering his third season with the Bills after Buffalo drafted him in the second round back in 2017. Dawkins ranked 39th out of 80 qualified tackles with a 69.4 overall grade last season, which was undoubtedly a step down from his rookie season when he ranked eighth among tackles with an 80.4 overall grade.

Looking at his career in full, Dawkins ranks 22nd out of 69 tackles who’ve seen at least 1,000 offensive snaps over the past two seasons with a 76.3 overall grade, and he ranks within the top 26 in both pass-blocking grade (77.9) and run-blocking grade (69.7). Dawkins has spent all but one offensive snap at left tackle so far as a pro, and he’s earned an overall grade of at least 70.0 in 13 different games throughout his two-year career.

Waddle signed a one-year contract worth $2 million with Buffalo this offseason. The veteran tackle had spent the past four seasons with the New England Patriots after spending his first two years in the NFL with the Detroit Lions. Waddle ranked 75th out of 80 qualified tackles last season with a 51.9 overall grade, and his highest grade over the past four seasons was just 57.8 in 2017.

Waddle has offered little resistance to pass-rushers since he left Detroit. Over the past four seasons, there have been 105 tackles who have registered at least 600 snaps in pass protection — Waddle ranks 103rd among them with a 93.6 pass-blocking efficiency.

Ford could end up winning a spot at either a tackle or guard position during training camp after the Bills selected him in the second round of the 2019 NFL Draft. Ford saw 898 snaps at right tackle during his collegiate career at Oklahoma to go with 441 snaps at left guard (along with 24 at right guard), and he was a stalwart in pass protection at the right tackle spot last season, ranking fifth among 113 Power-5 tackles who saw at least 300 snaps in pass protection with a 99.0 pass-blocking efficiency.

Ford will have to prove in training camp that his success in pass protection wasn’t just a consequence of playing in the Big 12 and that he can succeed as a run-blocker at the professional level (71.5 run-blocking grade during his career at Oklahoma). 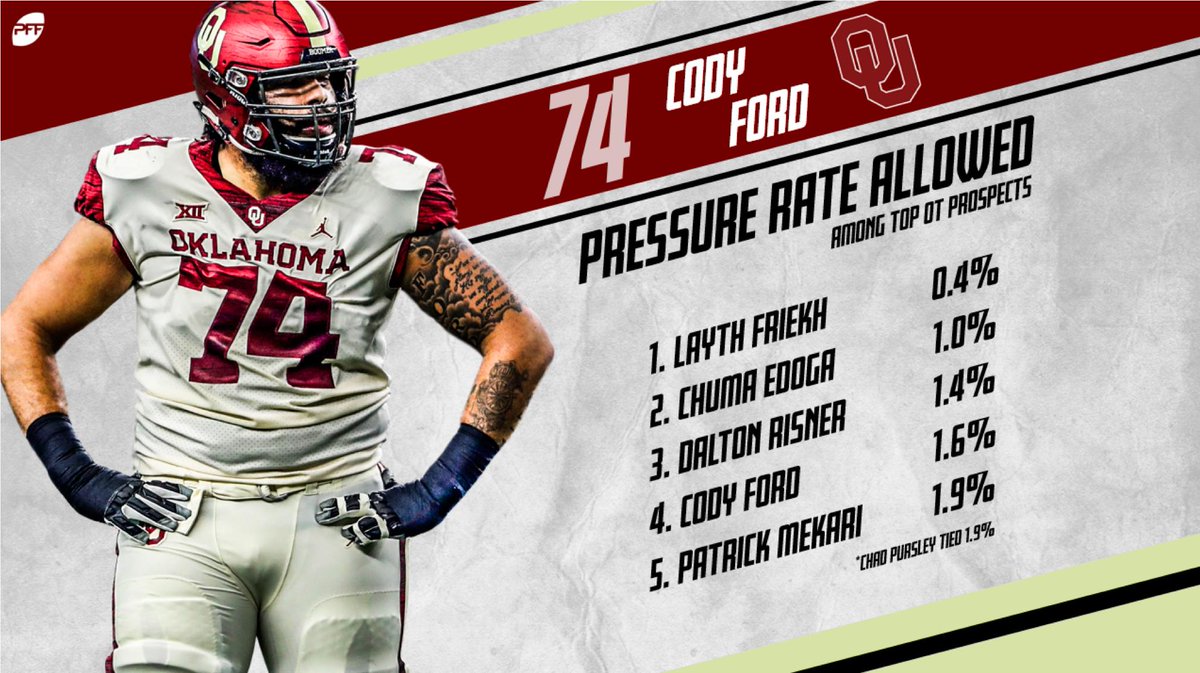 McDermott is entering his third season with the Bills, amassing just 24 snaps over his first two seasons, with 23 of those coming last season, a season in which he earned a 63.0 overall grade.

Hance joined Buffalo this offseason as an undrafted free agent. He played four seasons at Northwestern, spending the bulk of his time at left tackle (94.6% of 3,652 snaps) while also playing a little bit of left guard and right tackle. Hance earned a 70.7 overall grade during his collegiate career.

McGhin also joined Buffalo this offseason as an undrafted free agent. He played four seasons at East Carolina University, gaining ample experience across the offensive line, and he saw 54 snaps throughout his collegiate career at left tackle, 310 at center, 479 at right guard, 984 at right tackle and 1,025 at left guard. McGhin finished his FBS career with a 68.3 overall grade across those four seasons.