To say that the position opposite Patrick Peterson has been an issue for the Cardinals defense is an understatement. Bene Benwikere, Jamar Taylor, David Amerson, Tramon Williams, Justin Bethel, Marcus Cooper and Brandon Williams have all been thrust into a starting corner role for the Arizona Cardinals over the past three seasons, and only Tramon acquitted himself admirably. It’s a role that’s supposed to be one of the easiest in the NFL, as Peterson’s ability to track number one receivers leaves the other starter on the number two.

Now though, Peterson himself won’t even be in the lineup for the first six games, after he was served a suspension for violating the league’s PED policy. That means the spotlight turns to the man who was supposed to fill that role opposite Peterson — Washington cornerback Byron Murphy. 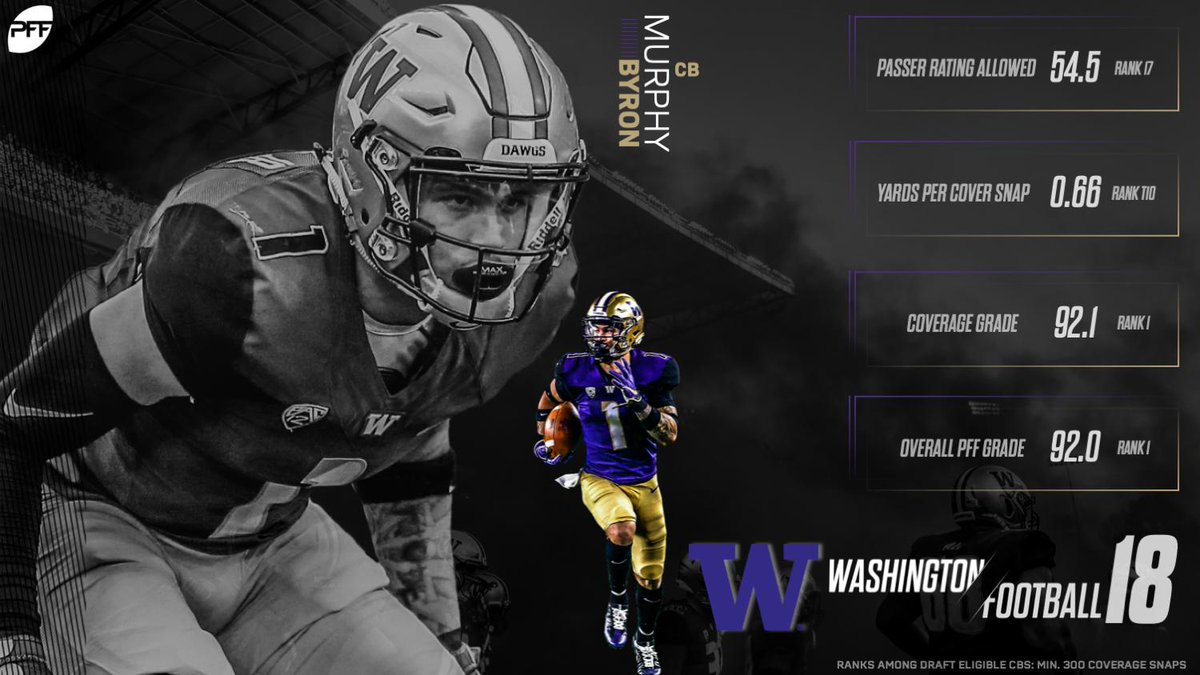 The Cardinals secured the 21-year-old corner with the first pick of the second round of the 2019 NFL Draft, hoping to finally bring stability to the cornerback position. Murphy was the sixth-ranked player on PFF’s draft board and our top-ranked corner. We loved his projection in any sort of off-zone scheme and that’s precisely what Vance Joseph has been known for in his time as a defensive coordinator. Last season, the Broncos ran the eighth-fewest snaps with a defender in press coverage of any team in the NFL. Murphy thrives when he can get eyes on both the wide receiver and quarterback as he has outstanding instincts.

Byron Murphy's game-winning pass breakup against Utah in the Pac-12 championship game was probably the most impressive rep I saw from any CB in the draft. Few CBs even at the NFL level come out of a pedal as efficiently as Murphy does pic.twitter.com/0j4o82KMjk

Those instincts led to the highest coverage grade of any cornerback in the country last season. On 713 coverage snaps between his freshman and sophomore seasons at Washington, Murphy racked up 19 pass breakups and seven interceptions while missing only four tackles. His ability in zone coverage should translate sooner rather than later.

If we are looking for a corollary for what Murphy’s role as the new top-dog in Arizona could look like, look no further than Joseph’s number one corner last season. Chris Harris Jr. was my player comp for Murphy, as they both make up for their lack of size and elite speed with exceptional hips and instincts. Harris was also one of the few starting corners in the league who plays outside in base personnel (only two corners on the field) and moves to cover the slot in nickel and dime. While the slot is often seen by many as an inferior role, we’ve found that targeting slot receivers is actually more valuable for offenses and hence covering it more valuable for defenses. Some 440 of Harris’ snaps last season came from the slot and he allowed only 11 first downs on 39 targets from there. Murphy doesn’t quite have the experience in the slot — with only eight snaps last season at Washington — but on his two targets from there he broke up both.

That’s a valuable role that will get even more valuable once Peterson returns. Vance Joseph will have the unique ability to play matchups with the 6-1, 203-pound Peterson and the 5-11, 190-pound Murphy. Peterson can follow the larger, ‘X’-type receivers around the field while Murphy can do the same with any shiftier, slot weapon on the other team. In Steve Wilks’ defense last year, Peterson only shadowed receivers in seven games – mostly towards the end of the season. Back in 2017 though, Peterson led the league with 259 coverage snaps shadowing No. 1 wideouts. Peterson now has an admirable foil on the other side to lock down the number twos and it’s the type of pairing that gives defensive coordinators a ton of flexibility.