When the overtime coin toss came up heads on Sunday, most people knew it was over. The fourth quarter had given us offensive fireworks with little defensive resistance – five touchdowns and a field goal had ballooned the score from 17-7 at the beginning of the final frame to a 31-31 tie at the end of regulation. That’s what gave the coin toss a sense of finality. We had just watched both offenses rip through the defenses seemingly at will. Why would that change in overtime?

Yet, the Kansas City Chiefs forced the New England Patriots into 3rd & 10 situations not once, not twice, but three separate times on the drive. The results on those third-down plays?

Three high-pressure overtime plays – potentially game-deciding plays given how well the Chiefs had moved the ball at the end of the game – led to three consecutive connections to the playmakers that have been at the core of the Patriots' offense in recent seasons. Much has been made about the Patriots’ lack of playmakers around Tom Brady compared to previous championship seasons, including some decline for Julian Edelman and particularly Rob Gronkowski. Those two showed in the AFC Championship that there is certainly gas left in the tank. 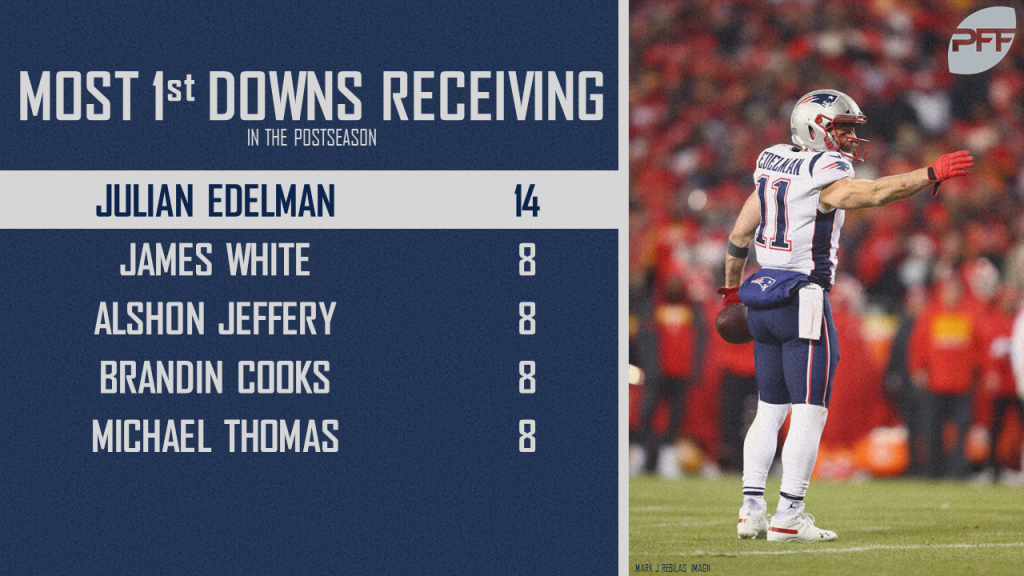 Edelman, specifically, has been very effective in the two postseason games as a chain mover. He has 16 receptions in the postseason, and a massive 14 of those have gone for first downs. No other player in the playoffs has more than eight receiving first downs. When Brady looks his way on third down, it’s been automatic with five targets, five receptions, 60 yards and five first downs.

It comes as no surprise that the majority of his damage has come over the middle of the field. When targeted between the numbers, Edelman has 191 receiving yards this postseason, which is 31 more than the next closest player (Michael Thomas). When lined up in the slot, Edelman has the highest receiving grade of any player this postseason (91.5) behind 10 receptions on 12 targets for 156 receiving yards. The formula is a simple one – get Edelman in space over the middle of the field and let him hunt out first downs. With Brady at the helm, though, stopping it is easier said than done.

Meanwhile, Gronkowski has clearly been slowed this season by the bevy of injuries that he has sustained throughout his career. Since 2011, Gronk has recorded an overall grade of at least 90.0 each season – a remarkable feat. This season, his overall grade came in at just 74.2 in the regular season. That was good enough for 11th out of 70 qualifiers at the position, but it was nowhere near the elite tier he has occupied during his career.

The Patriots’ game against the Los Angeles Chargers didn’t provide much to think that the playoffs would be any different for Gronkowski. He graded at just 65.7 with only one reception for 25 yards. Enter the AFC Championship game.

Against the Chiefs, Gronkowski was targeted a game-high 10 times, leading to six receptions for 79 yards. He looked closer to the physical force of previous years than he has for much of this season. He won at the catch point with a contested catch down the sideline, he forced a missed tackle after the catch on a different reception and he moved the chains in crucial situations. All of that led to his third-highest overall grade of the season at 76.6.

It’s funny to see the winner of five of the last 20 Super Bowls play the underdog card, as the Patriots did prior to Sunday, but it was valid given the doubts people had about them. At the forefront of those doubts was which players would make plays on offense, especially after the departure of Josh Gordon. Edelman and Gronk answered the call in Kansas City in a big way, and that provides them a chance to do it again in Atlanta.