Draft History: Grades and stats for every first- and second-round pick since 2015 AFC North edition

Today’s series takes a look at the AFC North.

Perriman’s time in Baltimore resulted in a missed rookie season through a knee injury, and nine drops from 52 catchable targets between 2016 and 2017. In Perriman’s final season in Baltimore, Ravens quarterbacks managed an NFL passer rating of just 14.6 on throws to him. He’s found success on a limited sample size in Cleveland, with no drops from 16 catchable targets and averaging 21.3 yards per reception for the Browns in 2018.

Williams has shown a safe pair of hands in Baltimore, with just one drop from 65 catchable targets over the three seasons he has featured. That being said, he has averaged just 7.9 yards per catch so far in his career, and now finds himself behind Hayden Hurst and Mark Andrews on the depth chart.

Correa moved from edge defender to inside linebacker in Baltimore and never really got his career going. After impressing on the edge for them this past preseason, he wound up in Tennessee where he saw a career-high 323 snaps, but still managed just eight total pressures from 148 pass-rushing snaps. 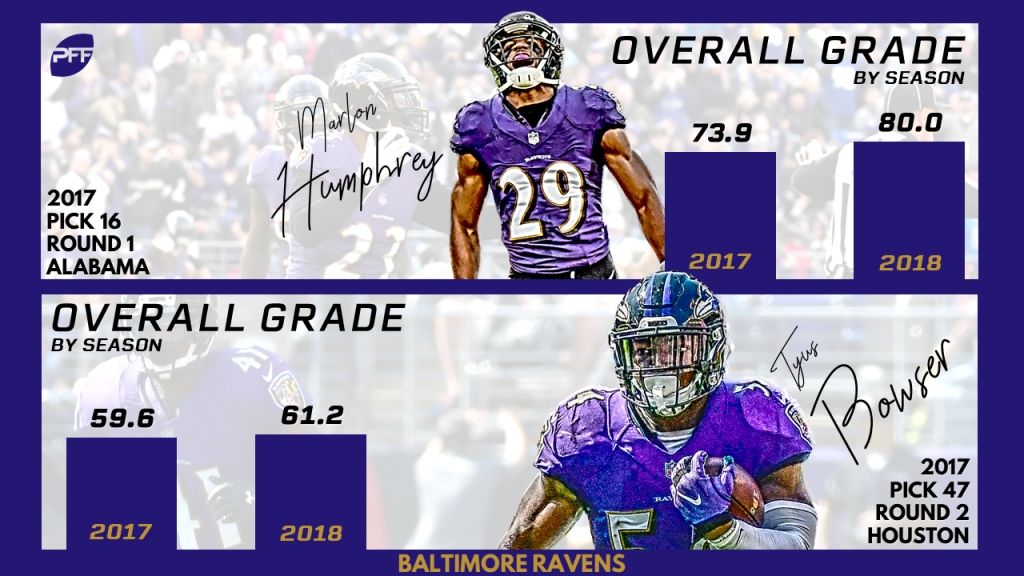 Humphrey looks like the real deal, having already racked up 23 combined interceptions and pass breakups through just two seasons in the NFL. As he enters his third season, he is arguably the most important player on the Ravens defense.

Bowser has struggled to make an impact as an edge defender so far in Baltimore, with just 20 total pressures on 181 pass-rushing snaps in his two-year career. Having played just 340 snaps through two seasons, he needs to step up quickly if he is to make something of his career with the Ravens.

Hurst missed the start of the season through injury but was solid once he got on the field. He didn’t drop any passes and finished his rookie campaign with 13 grabs for 163 yards and a touchdown. The biggest negative for Hurst though is that he wasn’t even the best rookie tight end on the team, with Mark Andrews producing a PFF grade of 73.6 and finishing the regular season with 34 receptions for 552 yards and three touchdowns.

Jackson is not yet a polished passer in the NFL, and there were some major struggles for him in the first half of the Ravens wild-card round loss to the Los Angeles Chargers. Jackson is one of the most unique players in the NFL given his skill set, and how the Ravens build around that skill set this offseason will be key.

Ogbuehi has seen time at left and right tackle but has really struggled in pass protection so far in the NFL. From 892 career pass-blocking snaps, he has allowed 82 total pressures, including 18 sacks. Will a change of scenery help him turn his career around in 2019?

The second offensive lineman drafted by the Bengals in 2015, Fisher has also struggled to make an impact with the Bengals. Despite flashes, he has failed to deliver consistently and has been hurt by injuries too. 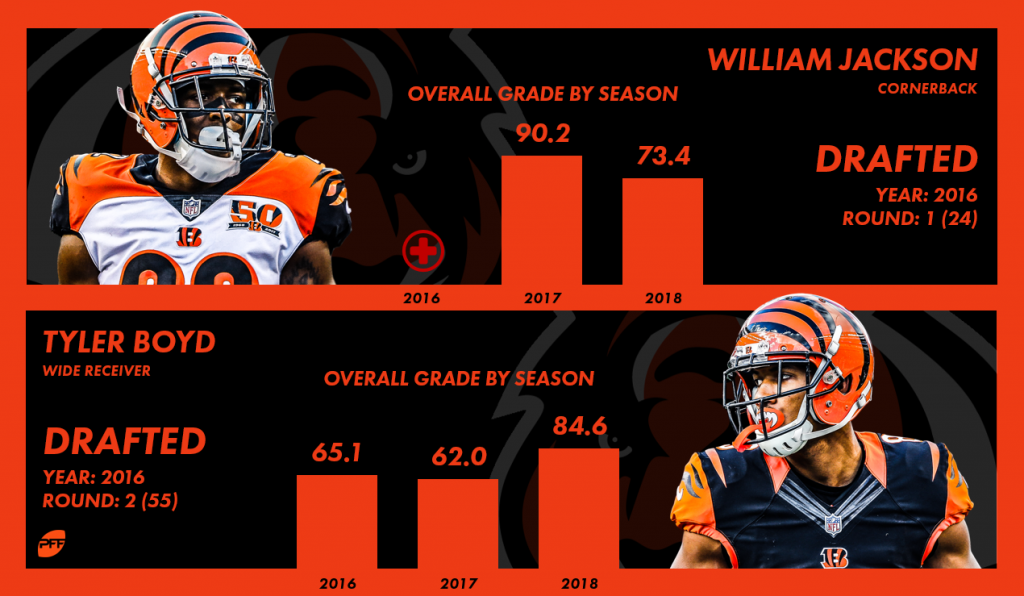 Jackson was one of the top cornerbacks in football in 2017, allowing an NFL passer rating of just 36.1 on throws into his coverage, allowing just 15 receptions and coming away with 11 pass breakups and an interception. He was up and down in 2018 and did allow five touchdowns, but once again was a factor making plays on the ball, registering 10 pass breakups.

Boyd delivered the best season of his young career in 2018, dropping just three of the 76 catchable passes thrown his way on his way to a 1,028-yard season. He also proved difficult to bring down, with six avoided tackles in 2018.

Ross has blazing speed and pulled in seven touchdowns in 2018, but his career has been plagued by injury and inconsistency so far. He dropped seven of the 28 catchable passes thrown his way this past season.

Mixon averaged just shy of 2.8 yards after contact per carry in 2018 while forcing 29 missed tackles on 236 carries. After fumbling five times on 199 carries and 30 receptions as a rookie, he didn’t fumble at all in 2018.

Price started 10 games for the Bengals as a rookie and had four games where he didn’t allow a single sack, hit or hurry. He was inconsistent though and graded poorly as a run blocker, so the Bengals will be looking for him to improve in 2019.

The release of safety George Iloka surprised many, but with the emergence of the rookie Bates in 2018 they didn’t miss the veteran. Bates made an impact from day one, registering three interceptions and four pass breakups in his rookie campaign.

Shelton will likely be viewed as a bust given that he was traded to New England in 2018, but the reality is that he was a solid run defender throughout his time in Cleveland. His best year for the Browns came in 2016 when the former Washington standout registered 42 tackles that resulted in a defensive stop.

Like Shelton, Erving is no longer on the team, so this pick didn’t work out well for the Browns. He saw a career-high 963 snaps for the Chiefs this past season and produced a career-high 57.7 pass-blocking grade. After four seasons, he is likely just a low-level starter in the NFL.

The former Utah star is currently a free agent after spending time with the Buffalo Bills and Kansas City Chiefs in 2018. Through four seasons he has yet to top 16 total pressures in a single season.

Coleman has shown flashes in his three-year career so far, forcing eight missed tackles from just 33 receptions as a rookie in 2016, but has also struggled with drops. Dropping nine of the 70 catchable passes thrown his way so far in his career, he was cut by the Browns last year and caught five passes with the Giants in 2018.

Ogbah has registered 98 total pressures through three seasons, coming on 1,256 pass-rushing snaps. That’s a fair representation of his career in Cleveland so far, where he hasn’t necessarily been bad, he just hasn’t made the impact they were hoping for when they spent a second-round pick on him.

After a slow start to his career in year one, Myles Garrett proved to everyone why he was a slam dunk pick as the number one overall selection with a dominant showing in his second season in the league. Garrett registered 67 total pressures, including 15 sacks, from 599 pass-rushing snaps in 2018, and heads into his third season as one of the core stars of an up and coming Browns team.

Peppers played closer to the line of scrimmage in 2018, and the results were as expected. He’s better suited to that type of role, finishing his second season in the NFL with 12 total pressures, 20 tackles resulting in a defensive stop, an interception, and four pass breakups.

Njoku improved in the second half of the 2018 season after dropping seven passes from 38 catchable targets in the opening seven games of the season. Over the rest of the season he had just one drop, and in general, looked more dangerous as a receiver with Baker Mayfield at quarterback.

Kizer was traded away before the 2018 Draft, and even before they drafted Baker Mayfield, but it’s hard to fault them taking a gamble on Kizer in 2017. They drafted him, got him on the field to see what he could do, then moved on when they had both the No. 1 and No. 4 pick in 2018. 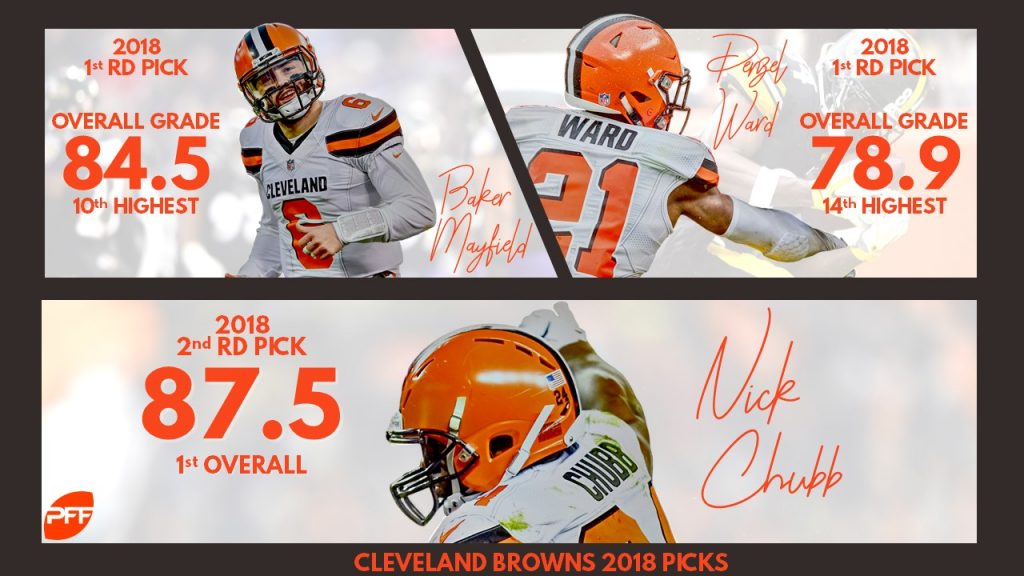 Mayfield was sensational as a rookie, especially when the Browns kept him free from pressure, completing 67.7% of his passes and producing a 90.4 PFF offensive grade when not under pressure. Even under pressure, he wasn’t bad, with an 8:7 touchdown-to-interception ratio. The addition of Mayfield puts the Browns in position to make a serious Super Bowl challenge in the next few seasons.

Ward was another slam dunk pick by the Browns with the former Ohio State standout delivering a big season in his rookie year. He allowed just 53.7% of the passes thrown into his coverage to be caught and came away with three interceptions and six pass breakups.

Corbett played just 14 snaps as a rookie and never more than four in any individual game. He did have some nice performances in pass protection in the preseason though, allowing just five total pressures from 131 pass-blocking snaps in August.

Chubb saw just 16 carries in the opening six games of the season but saw 176 the rest of the way as he delivered in an impressive rookie season. He averaged almost 4.5 yards after contact per carry, forcing 44 missed tackles on 192 carries over the course of the season.

Dupree has struggled to generate pressure consistently for the Steelers, with his 46 total pressures in 2018 a career high. Coming on 468 pass-rushing snaps that’s not terrible, it’s just not the level of production you would hope from a first-round draft pick.

Golson early career was impacted by injuries, and he never saw action in his time in Pittsburgh. 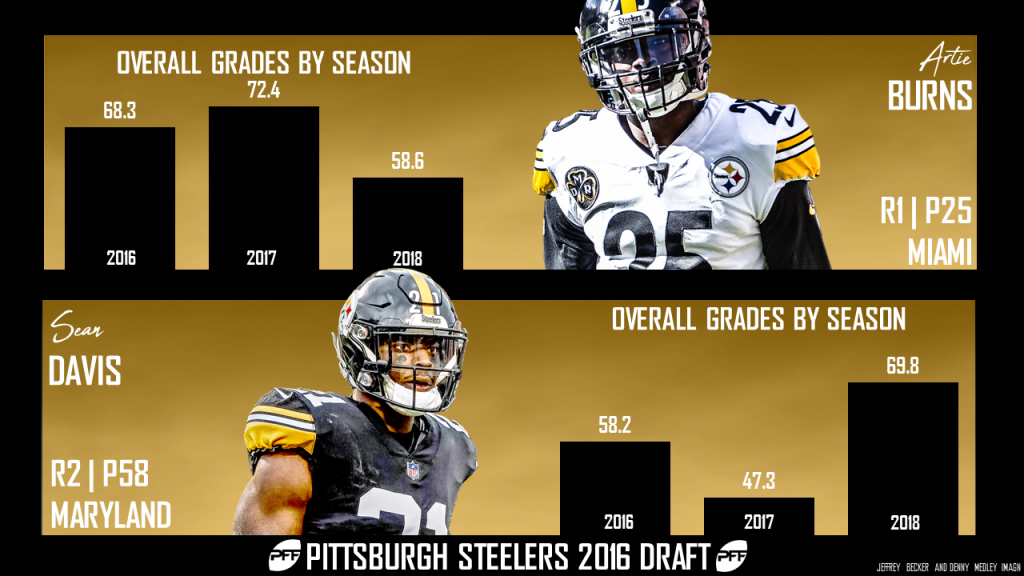 Burns has been up and down in his time in Pittsburgh, coming away with four interceptions and 19 pass breakups but also allowing 13 touchdowns on 1,357 snaps in coverage over the past three seasons. He played a career-low 308 snaps and wound up getting benched in 2018.

Davis is coming off the best season of his career, producing career highs in PFF coverage and run-defense grades. He’s already cleaned up his tackling, reducing his missed tackles from 18 in 2017 to 12 in 2018, but this is an area where he could still stand to improve. 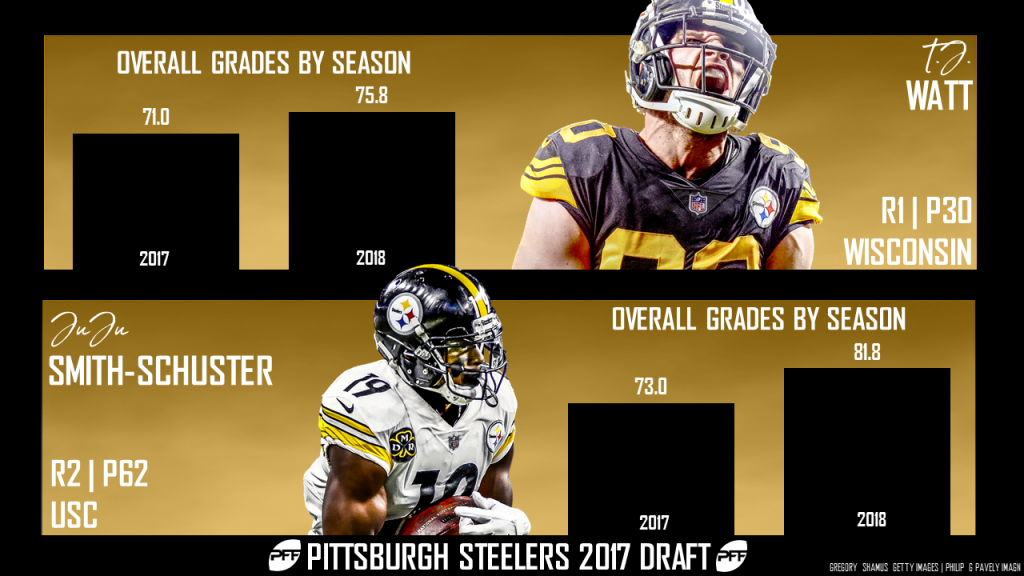 Watt hasn’t quite put it all together consistently yet, but he has shown some dominant flashes with big performances. He registered 13 sacks in 2018, but six of those came in just two games. With 52 total pressures from 458 pass-rushing snaps in 2018, he heads into season three coming off a career year.

Smith-Schuster has proven to be a big-play threat and a consistent pass catcher for the Steelers, dropping just eight of the 177 catchable targets thrown his way over the past two seasons. Showcasing his big-play ability, the former USC standout has had a 97-yard reception in each of the past two seasons.

Edmunds was one of the surprise picks of round one on draft day in 2018, but delivered some solid performances in the second half of the season, finishing the year tied for 25th among safeties with 19 tackles resulting in a defensive stop.