Dolphins have no reason to underutilize Kenyan Drake (again) in 2019

Kenyan Drake has proven to be the Miami Dolphins’ most efficient running back on a per-carry basis in his three-year NFL career, but the now 25-year-old ‘Bama product has yet to lead the team in carries in any single season. Cast behind the likes of a combination of Jay Ajayi (2016-17) and Frank Gore (2018), Drake’s impact has been limited while his efficiency has remained sky-high. 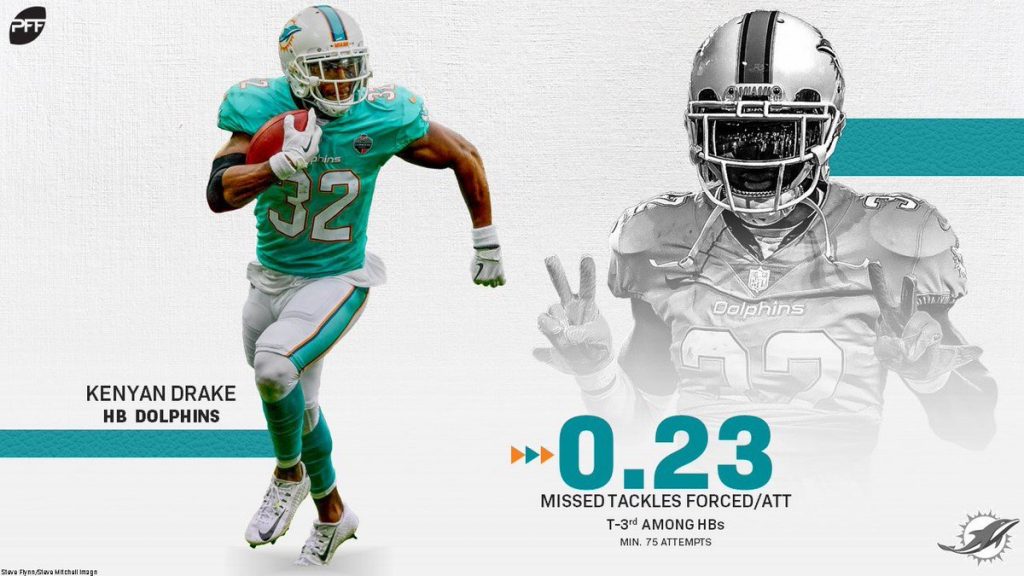 Rushing for 1,358 yards, 47 first downs and nine touchdowns across his 286 career attempts, Drake ranks tied for fifth in yards per carry (4.9), tied for second in forced missed tackles per carry (0.22) and is in sole control of second in yards after contact per attempt (3.4) among backs with 250 or more carries in the three-year span (2016-18). His career rushing grade (80.4) ranks ninth among the same group of backs, as well.

Driving Drake’s success is his ability to win after early contact and forced missed tackles, as evidenced by the metrics mentioned above. Among the 54 NFL backs with 100 or more carries where they’ve been contacted at or behind the line of scrimmage since 2016, Drake ranks tied for first with Cleveland Browns’ Nick Chubb – yes, Chubb had more than 100 such attempts as a rookie – in yards after contact per attempt (3.7). And the average for the group was just 2.3.

A former four-star recruit with 4.45s speed and crazy explosion, Drake is a premier talent from a tools perspective and pairs his coveted naturally ability with great contact balance and short-area quickness. His four-star status and plus athleticism, however, hasn’t pushed him into the limelight in Miami, nor did it land him a lead role in Tuscaloosa.

Stuck behind a wealth of future NFL backs in Eddie Lacy, T.J. Yeldon and Derrick Henry for all of his college career, Drake only had 100 total carries and 33 receptions in his final two years in Tuscaloosa (2014-15). He, however, still earned an impressive 82.4 rushing grade and averaged 0.28 forced missed tackles per carry in his 2015 campaign, ranking inside the top-25 in both metrics.

Such high levels of efficiency have been maintained in what has continued to be a limited role for Drake in the NFL.

Though capable of having a considerable impact after the catch, Drake’s receiving efficiency has been plagued by drops. His three-year drop rate is the fifth-worst of any running back with 100 or more targets since 2016, and his receiving grade (59.2) and yards per route run average (1.18) have suffered as a result.

That’s not to say an increase in targets wouldn’t lead to improved production from Drake, but Kalen Ballage’s skillset gives Miami every reason to save Drake for early downs and push the second-year Arizona State running back into a primary receiving role.

In his final two years with the Sun Devils (2016-17), Ballage caught 64-of-84 targets for 560 yards, 17 first downs and one touchdown, earning the ninth-best receiving grade (75.0) among qualifying Power 5 backs in the process. He also ranked tied for seventh in yards after the catch per reception, 10th in yards per route run and fourth in forced missed tackles per reception (0.36) among the same group of backs.

There’s no need to force a round peg into a square hole and vice versa. Drake is hands down the best rusher on the Dolphins’ current roster (and has been for the past three years). Ballage has done enough at the college level to warrant him earning the nod on passing downs and taking on a primary receiving role in the offense over what has been an underwhelming showing from Drake as a receiver.

Gore and Ajayi are no longer in South Beach. And Drake isn’t fighting for reps behind Henry, Yeldon or Lacy, either. There are no more excuses; it’s ‘bout that time Drake gets his shot at a lead role.