INDIANAPOLIS, IN - AUGUST 20: Ronnie Stanley #79 of the Baltimore Ravens is before the game against the Indianapolis Colts at Lucas Oil Stadium on August 20, 2016 in Indianapolis, Indiana. (Photo by Michael Hickey/Getty Images)

Here are the biggest takeaways from the Ravens' 30-9 preseason Week 3 victory over the Lions:

Matthew Stafford's results this week weren’t nearly as encouraging as the two games prior. Stafford didn’t complete a single pass targeted over 10 yards downfield on six attempts; that included his ugly interception late in the first half, where he must not have seen Baltimore's Anthony Levine undercutting a crossing route. Stafford wasn’t aided, though, by the talent around him, as his receivers dropped four of their 17 catchable targets.

First-round pick Taylor Decker had his best outing of his short career. In 31 pass-blocking snaps, he allowed one lone pressure, and in 11 run-blocking snaps Decker took only one downgrade. Even more encouraging was the fact that last year’s first-round pick, Laken Tomlinson, had his best performance of the preseason as well, with a clean day in pass protection.

Heading into this week, sixth-round pick Anthony Zettel hadn’t seen much preseason action; the former Penn State defensive tackle now turned defensive end was only on the field for 27 total snaps the first two games. On Saturday, though, Zettel finally got more than a couple of series, and the results were superb. He made two run stops and blew up multiple others.

Joe Flacco started the day in vintage Flacco form: overthrowing a go route to Mike Wallace. He settled in well from there, though, and collected a handful of nice throws and a positive grade. There was definitely an emphasis on self-preservation from the Ravens QB. On his 17 dropbacks, he averaged a scorching 2.13 seconds before throwing Saturday night. When you’re throwing the ball that quickly, receivers have to be winning their routes, and Flacco had a few incompletions as a result of his playmakers not getting separation.

If I had to pick one first-round pick who’s looked the most impressive this preseason, it would have to be Ravens LT Ronnie Stanley. We’ve seen over the past few years how difficult it is making the jump from college to the pros along the offensive line, but Stanley has been as clean as can be. In three games, he allowed one lone pressure, and that’s running against first-team defenses. Obviously it’s a limited sample size, but it looks like the Ravens picked themselves a good one.

Baltimore’s secondary will have a decidedly different look in 2016, and if Saturday is any indication, that might be a good thing. No single defensive back allowed more than 20 yards on the day, and the Lions' quarterbacks combined for a 47.6 passer rating. Anthony Levine did a beautiful job of undercutting a crossing route for an interception, while Sheldon Price recorded two pass breakups on four targets.

Get everything you need to know about the Baltimore Ravens entering the 2016 season by clicking the image below. 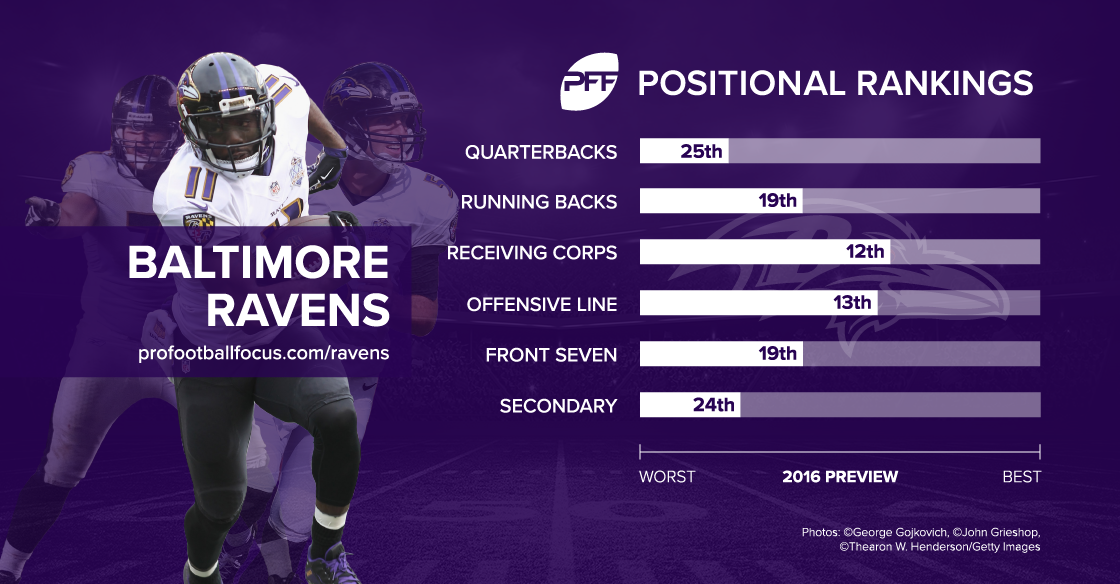