One of the most misleading statistics used to evaluate defensive players is the number of tackles they have. While it’s better to have made a tackle than to have missed a tackle, there are some cases where a defender did more things poorly on the play than good but still ended up making a tackle.

There is plenty a defender can do to help or hurt his team that doesn’t involve bringing down a player, but if you’re looking for a number on how much a defender takes down a ball carrier, stops is the statistic for you.

A stop is a play where a defender makes a tackle, and the location of the tackle means the play is a successful one for the defense. While the definition of a successful play for a defense will differ slightly from one site to another, here is how we have always defined it:

On a second down, if the offense gets 60% of the way to a first down or less

On a third or fourth down, if the offense doesn’t get a first down. 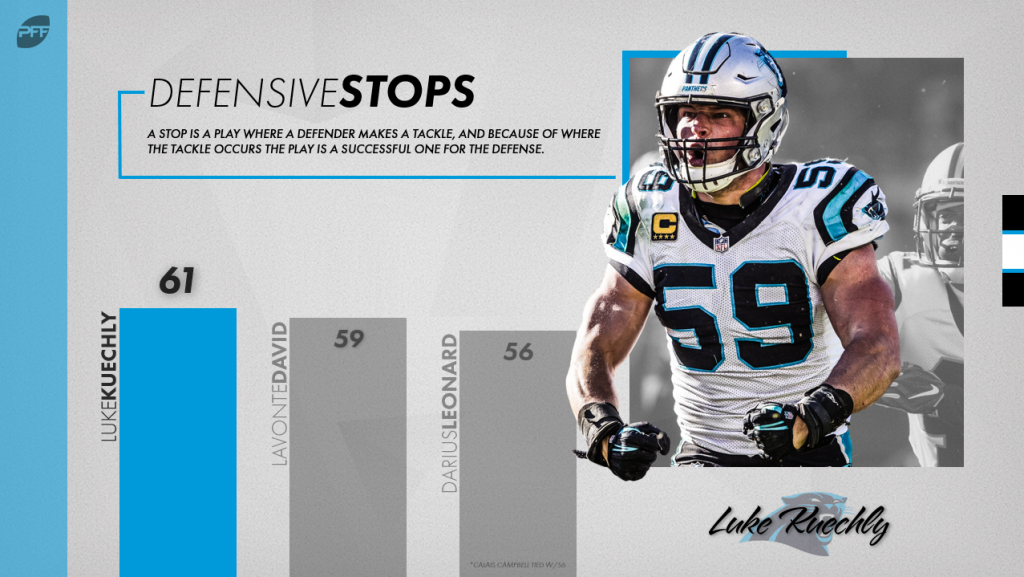 Typically, when a defender makes a stop, he’s done something right on the play to get himself in position to make a tackle. He either shed a block, or he had the right combination of reaction time and speed to get to the right place at the right time. This past year over three-quarters of defensive stops resulted in a positive grade for the defender.

When a defender makes a tackle that isn’t a stop, it’s a lot less likely the defender did something right on the play. Something hasn’t gone well for the defense, which has led the offense to get a first down or close to it, which may or may not be the tackler's fault. While the majority of tackles that aren’t stops get 0-graded by us, they are over six times more likely to get a negative grade on the play than positive.

One reason why a play in which a defender does make a tackle could be considered a bad play by a defender is one where he allows a catch for a big or decent gain. For example, Roquan Smith had 95 tackles on the year, which put him among the top 10 for linebackers. Forty-two of those tackles were on plays where he allowed a catch and then tackled the receiver, and only 13 of those 42 plays were stops. That means 29 of his tackles came on plays where he allowed a catch, allowed a notable amount of yards, but then got credit for a tackle.

In the run game, many things could go wrong for a defender who still makes the tackle. He could take too long to get off his block, could over or under pursue the runner, or could allow yards after contact while trying to take the runner down.

Treating all tackles as equal doesn’t make sense when some lead to a loss of yards or a fourth down while others allow a first down. Using stops instead of tackles takes out a lot of noise where defenders may or may not have done something well, and leaves plays where they likely did something well and helped their team.