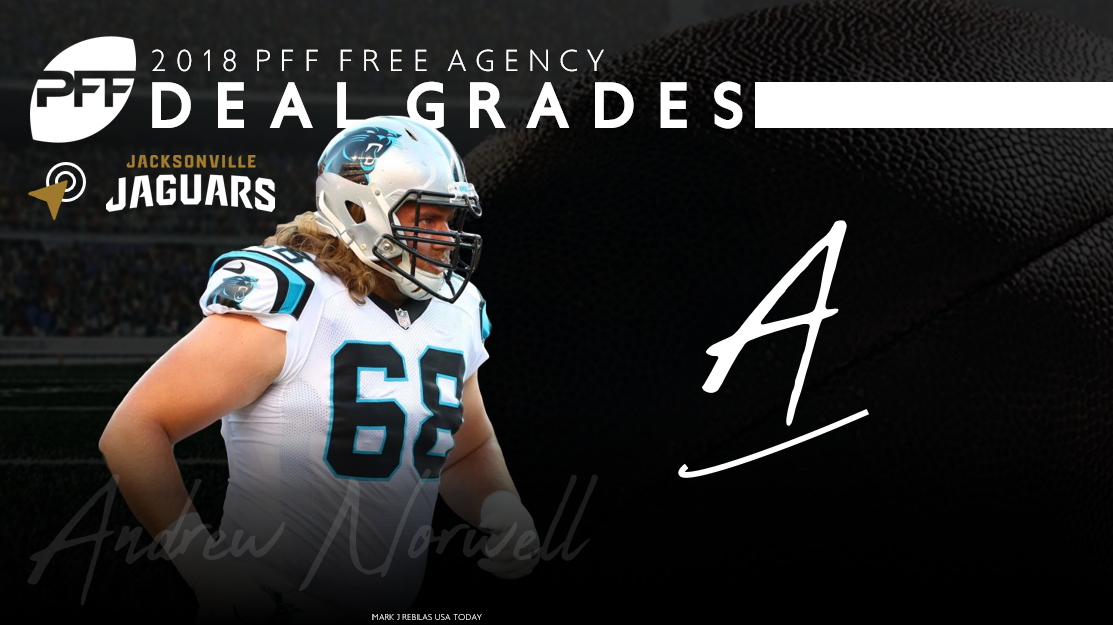 What it means for Norwell:

The Jacksonville Jaguars‘ signing of Andrew Norwell means he joins center Brandon Linder as the highest-paid player at his position league wide. The guard-center duo immediately becomes one of the best in the NFL and is on par with other dynamic combo’s seen in Dallas and Philadelphia. Norwell’s 2017 88.0 overall grade and Linder’s 84.7 both ranked inside the top five at their respective positions.

What it means for Jacksonville:

The Jaguars entered the offseason with the offensive line easily being their biggest need and addressed it by replacing struggling Patrick Omameh (53.6 overall grade) with the top free agent offensive lineman in Norwell. As a unit in 2017, the Jaguars offensive line generated just 1.2 yards before contact per carry and Jaguars' runners had just 10 break away runs (carries of 15 or more yards), both low marks. Also, the Jaguars guard tandem surrendered 55 pressures, including four hits and four sacks.

Enter Norwell, who not only brings top-10 run-blocking prowess (83.4 run-blocking grade) but also elite pass protection skills. On 651 pass-blocking snaps including the playoffs, Norwell surrendered just 15 pressures, zero of which were sacks or hits.

The Jaguars took a huge step in fixing what was clearly their biggest need. Their offensive line now features three above average to very-good starters who should help propel the Jaguars' rushing attack into a more efficient version of itself.