The stage is set for second-year All-Pro, Patrick Mahomes, to make his playoff debut on Saturday against the Indianapolis Colts in the NFL Divisional round. Mahomes lived up to his exorbitantly high preseason hype and more this season by carrying the Kansas City Chiefs to the number-one seed in the AFC and home-field throughout the playoffs.

Mahomes produced one of the best statistical seasons to date by a quarterback, with 5,097 yards and 50 touchdowns through the air. His 93.2 overall grade ranked second at the position behind only Drew Brees, who topped out at 94.7. The second-year standout amazed with highlight-level throws seemingly every week, and his deep passing game was unmatched throughout the regular season. He generated 44 completions, 1,514 yards, and 15 touchdowns on throws that traveled 20-plus yards downfield, all ranking first among quarterbacks.

Mahomes and the Chiefs’ offense will be lining up against a red-hot Colts team that comes into Arrowhead Stadium after winning nine of their last 10 games. In that stretch, the Colts’ defense has allowed the sixth-lowest passer rating to opposing quarterbacks at 88.0, with only 12 touchdowns allowed through the air – tied for the second-lowest among teams since the start of Week 7. However, despite their recent success, the Colts’ zone-heavy defensive scheme will be put to the test and could actually play to the advantage of Mahomes and the Chiefs’ high-octane offense. 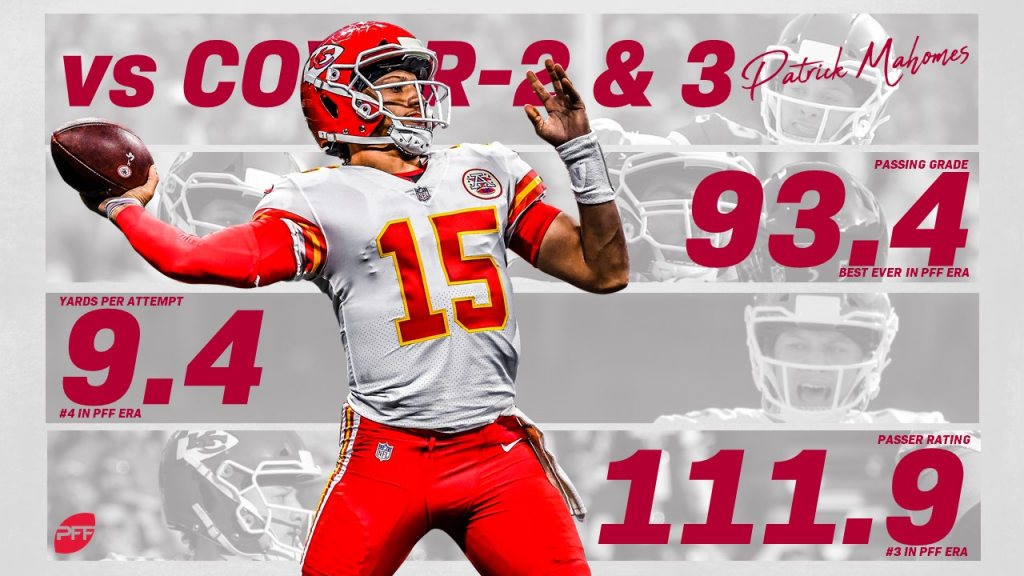 One of the many areas that Mahomes has stood out through the course of the season has been his play against zone coverages. His overall grade of 93.4 when playing against cover-2 and cover-3 schemes is the highest ever in the PFF era. Further, his 9.4 yards per attempt ranks fourth all-time, and his 111.9 passer rating ranks third among quarterbacks with at least 200 attempts against cover-2 and cover-3 schemes in the PFF era.

The Colts have used cover-2 and cover-3 defensive schemes on 64.4% of their snaps this season, the highest rate in the NFL.