Larry Fitzgerald will be back for another year with the Arizona Cardinals. The sure-fire future Hall-of-Famer is coming off yet another productive season in the NFL, and he should still be a valuable weapon going into his 16th season. Fitzgerald earned a receiving grade of 72.3 this past season, ranking 39th out of 108 qualifying wide receivers and although it was his second-lowest receiving grade in the PFF era (since 2006), he still saw over 100 targets and gained 734 receiving yards, which led the team by nearly 150 yards. For a team that is coming off a historically bad offensive season, bringing back a 35-year-old Fitzgerald is a good move.

Fitzgerald may not be as quick and fast as he used to be, but he can still catch the ball with the best of them. On 72 catchable balls thrown his way in 2018, Fitzgerald dropped only three, giving him the 32nd-best drop rate (4.2%) out of 108 wide receivers. Just a season before that, Fitzgerald dropped only 3.2% of catchable targets, ranking 14th at the position. With Josh Rosen coming off a rough rookie year, bringing back a sure-handed target like Fitzgerald should only help.

As Fitzgerald exited his prime a few years ago, he made a transition to being primarily a slot receiver. In 2018, Fitzgerald lined up in the slot on 74.7% of his receiving snaps, which was the 15th-highest rate among wide receivers. He caught 49 passes from the slot, and his 540 receiving yards from the slot ranked 13th at the position. Fitzgerald’s top-end speed may have left him seasons ago, but his route running and toughness over the middle have helped prolong his career as a slot receiver. The last time Fitzgerald lined up as primarily an outside receiver was in 2013. 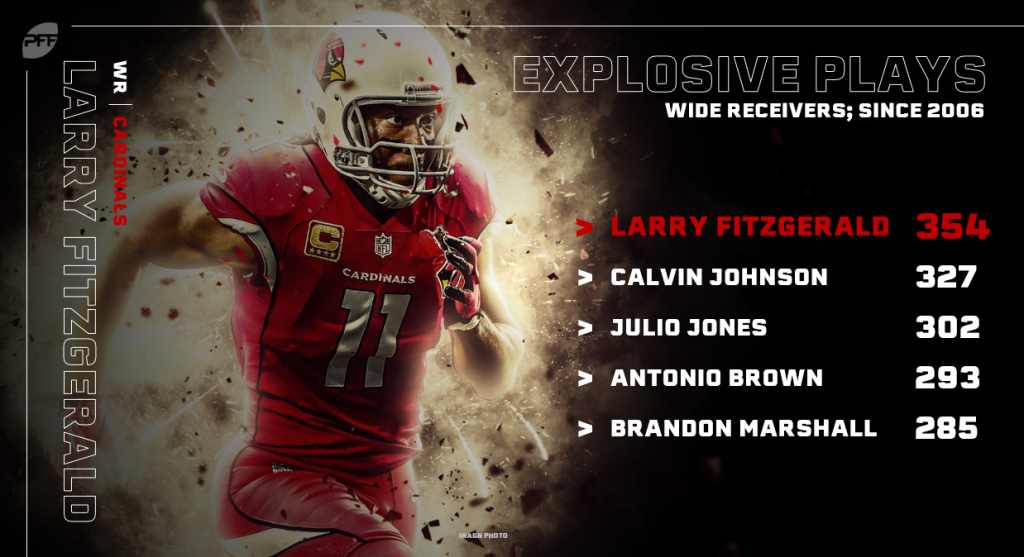 Larry Fitzgerald’s career to this point has been filled with all kinds of accolades. In the PFF era (2006-present), Fitzgerald has noticed a staggering 354 explosive plays (gains of 15+ yards) to lead all wide receivers, while his 746 first down receptions are 103 more than Brandon Marshall, who is currently in second place. Since we started tracking contested catches back in 2017, Fitzgerald ranks sixth with a total of 32, showing he can still win the 50/50 balls with the best of them.

And of course, who can forget his legendary performance in the 2008 playoffs? Fitzgerald earned a receiving grade of 91.2 in that postseason, ranking second among wide receivers with at least two games in a single postseason. Fitzgerald was targeted 40 times in that playoff run, tied for first in a single postseason in the PFF era. He made the most of his targets, as he gained 546 receiving yards and scored seven touchdowns as he led the Cardinals to a memorable Super Bowl appearance.

Despite playing on a bad offense in 2018, Fitzgerald still managed to put together a solid season. He gained an average of 1.60 yards per route run, which ranked in the top half (52nd) among qualifying wide receivers. The Cardinals’ offense has nowhere to go but up, and if Rosen and the offensive line can make some progress in 2019, Fitzgerald could cap his career off with another great season – or he can always come back for another one after that.