Seven rounds of emails came and went Wednesday afternoon, and after the dust settled, only one name was sent in: Washington State safety Jalen Thompson. The Arizona Cardinals selected Thompson with the first pick in the fifth round to add to a safety room that includes Budda Baker, D.J. Swearinger and fellow fifth-rounder Deionte Thompson.

The Washington State product, who was tagged as a second-round talent in our preseason 2020 NFL Draft Guide by PFF's lead draft analyst Mike Renner, will cost fifth-round selection in the 2020 NFL Draft, per the supplemental draft rules — one of the picks acquired by the team's jettisoning of signal-caller Josh Rosen.

Now the question becomes how the new Thompson fits into the picture out in the desert.

[Editor's note: The preseason 2020 NFL Draft Guide will be made available to PFF Edge and Elite subscribers on August 12.] 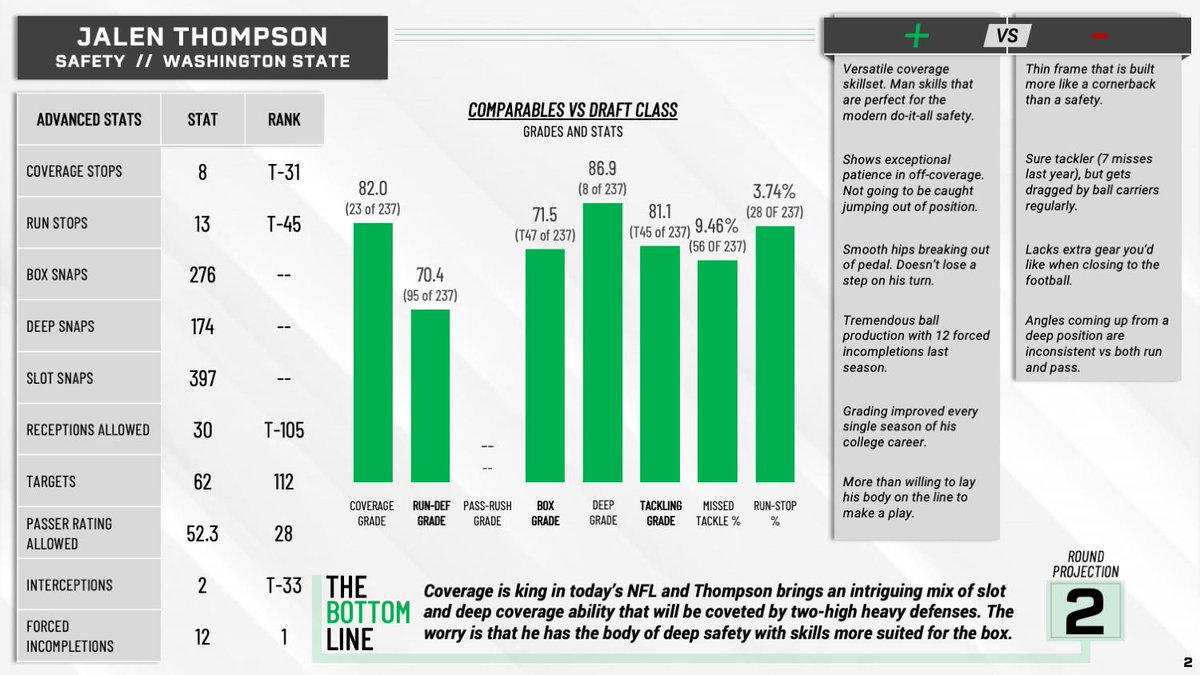 Prior to Wednesday’s draft, Renner noted that defensive coordinators that play a lot of split field coverages would be the ones who would covet Thompson’s skill set. Arguably his biggest strength is his ability to match routes from the type of deep-off position safeties see in quarters coverage and its many variations. In Vance Joseph’s defense, that type of ability is required from his safeties.

The Washington State Thompson is a much more seamless fit to a role Joseph’s defense than Alabama’s Thompson early on. Not only because of that off-coverage ability, but also because of Jalen Thompson’s ability to play man coverage over the slot and on tight ends. Will Parks played a good deal of nickel/dime safety in the Denver Broncos' defense a season ago and the newly added safety looks like the favorite to fill a similar role with the Cardinals. 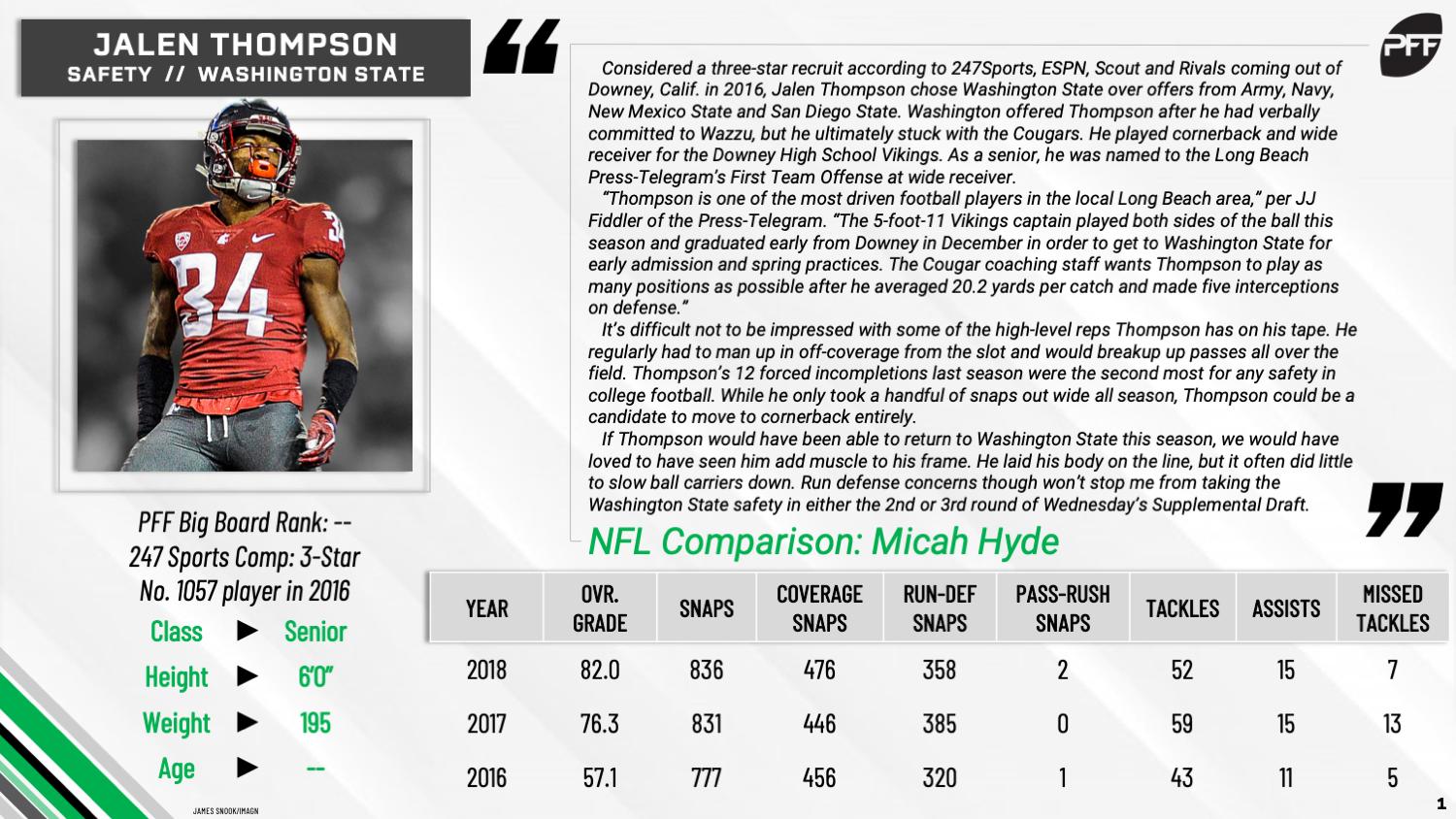 Thompson was used as a defensive chess piece during his final year at Washington State and logged 269 snaps in the box, 378 snaps as a slot cornerback, 169 snaps as a free safety, 17 snaps as a wide cornerback and five snaps along the defensive line. The versatility makes him a huge asset in an NFL where the demand for a player with the ability to move around the defense is at an all-time high.

As the upcoming guide alludes to, it's difficult not to be impressed with the high-level reps that Thompson has put on tape. He was regularly asked to man the slot cornerback position during his final season, and he not only held his own — he excelled there. Targeted 39 times in slot coverage, Thompson allowed just 17 receptions, 156 receiving yards and one touchdown while forcing six incompletions on the year. His 15.5% forced incompletion percentage ranked 15th among the 58 FBS safeties with least 30 slot targets, while his 63.6 passer rating allowed ranked 20th.

Over the last two seasons, the Washington State product has been stellar whenever he's been tested downfield. Looking at his targets of 10 or more air yards since 2017, Thompson has allowed just nine receptions on 32 targets, allowing just one touchdown and recording eight forced incompletions in the process. The passer rating when targeting Thompson at least 10 yards downfield over the last two seasons? 33.3. Quarterbacks would have been statistically better off by just putting the ball in the stands.

Thompson's improved his overall grade every single year of his college career and ended the 2018 college season with an 82.0 overall grade and an 85.1 coverage grade that ranked tied for 34th and tied for 31st, respectively, among the 234 FBS safeties who played at least 500 snaps last year.

All in all, we thought the Cardinals got a steal in the 20-year-old safety. With his biggest knock at the moment being his size, another year in a weight room could have done wonders for his draft stock, but even without that we still would have been willing to add the safety to any roster in the NFL prior to the fifth round. Given the success rate of fifth-rounders leaguewide, adding the player who led all college safeties in forced incompletions last season is well worth the risk.