Can Demaryius Thomas still produce with Tom Brady under center?

These last few years have been less than ideal for wide receiver Demaryius Thomas. When quarterback Peyton Manning announced his retirement following his team's 2015 Super Bowl victory, Thomas went from receiving passes from one of the greatest quarterbacks of all time to receiving inaccurate targets from some of the most underwhelming quarterback play we have seen here at PFF. 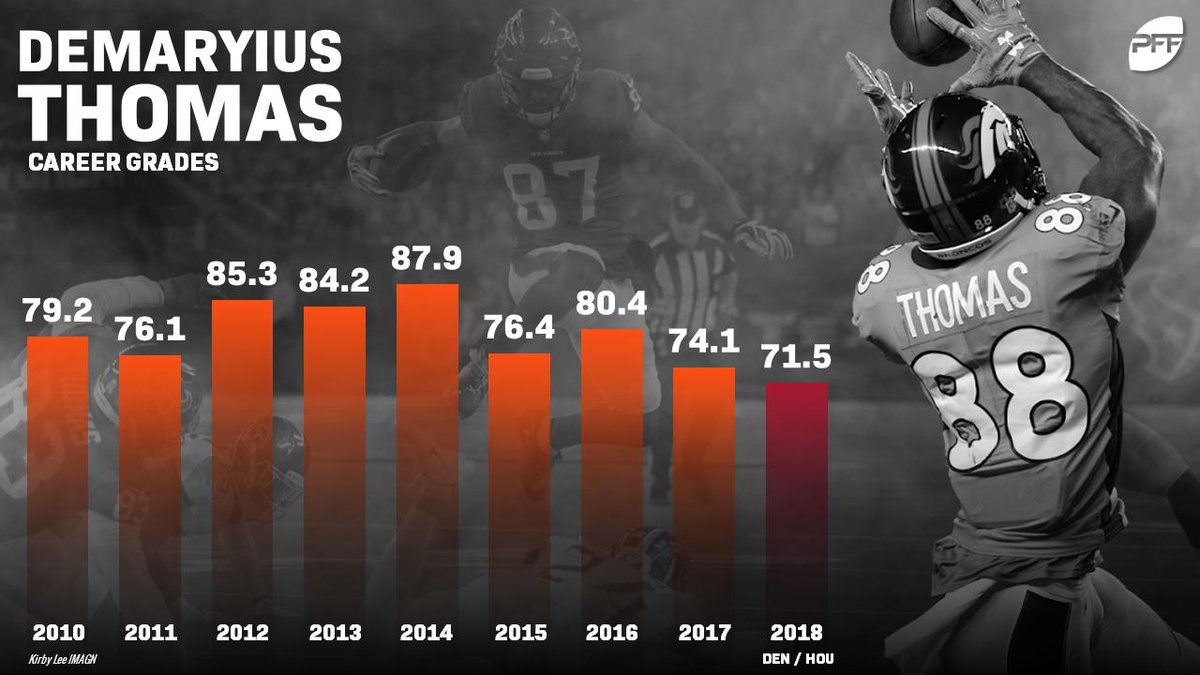 Nonetheless, during the 2018 season, Thomas was traded from the Denver Broncos to the Houston Texans for a 2019 fourth-round draft pick. The veteran receiver seemed to have a bright future in Houston with rising star quarterback Deshaun Watson. That was until Thomas suffered a torn Achilles in the Week 16 matchup against the Philadelphia Eagles. Consequently, the 31-year-old receiver was released by the Texans but has found a new home with the Super Bowl Champion New England Patriots.

Over the course of his career, Thomas developed into one of the most productive wide receivers of the PFF era (2006 – present). He has finished 31 games with an average of at least 3.00 yards per route run – the eighth-most games of any receiver over the last 13 years, while his career average of 2.16 yards per route run ties him for ninth. Moreover, his 90.6 career receiving grade ranks 17th among all wide receivers since 2006, and he has tallied the fourth-most games that earned a grade of 90.0 or higher, with 10. However, as good as he has been overall, it's been his performance in the red zone that has stood out above all.

Among qualifying receivers in the PFF era, Thomas ranks 12th in red-zone receiving grade at 76.2, ninth in red-zone WR rating at 104.7, ninth in combined first downs and touchdowns with 61, and fourth in yards after the catch per reception at 3.1. However, his severe injury, in addition to his age, makes many wonder whether or not he can get back to the elite form he was once at. 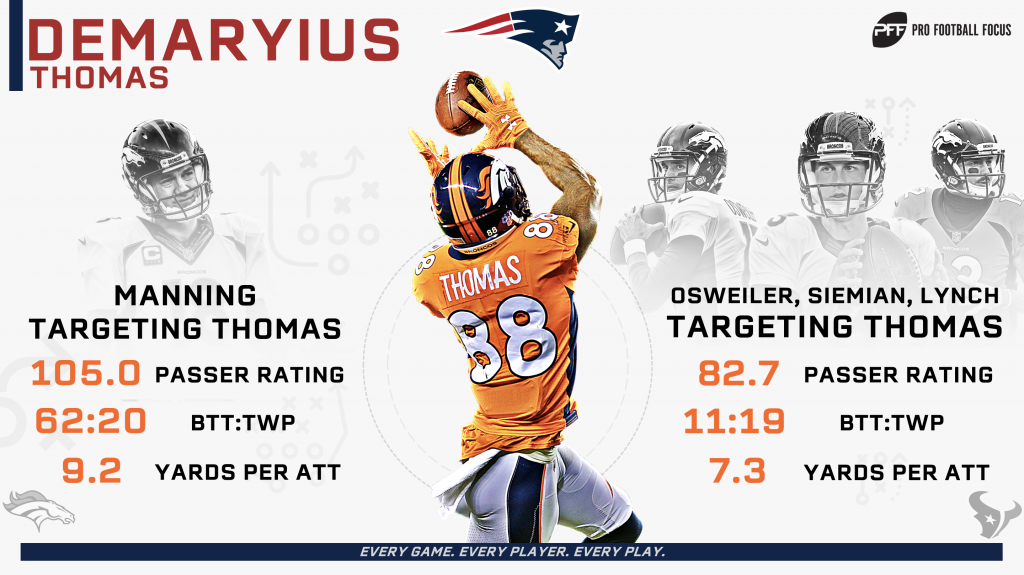 As mentioned, Thomas spent a large part of his time in Denver with Peyton Manning at the helm. The future Hall of Famer and Thomas had a connection unlike any other, and that was instrumental to Denver’s success. When Manning targeted Thomas, he recorded an elite 91.8 passing grade, 9.2 yards per attempt, a 105.0 passer rating, and 62 big-time throws to only 20 turnover-worthy plays. When “The Sherriff” left town, however, Thomas’ accurate targets left with him. From 2016 to 2018, only 71.4% of Thomas' targets were deemed to be catchable, a mark that ranked 31st among 51 qualifying players at the position over that span.

Furthermore, none of Denver's subsequent signal callers were able to feed off Thomas’ superb receiving abilities quite like No. 18. When targeting Thomas, 2016 first-round pick Paxton Lynch was only able to record a 72.5 passing grade; Brock Osweiler managed just a 65.5 passing grade; Trevor Siemian tallied 60.5 passing grade. In addition to the poor passing grades, Lynch, Osweiler, and Siemian combined to put up only 7.3 yards per attempt, an 82.7 passer rating, and 11 big-time throws to 19 turnover-worthy plays when targeting Thomas. 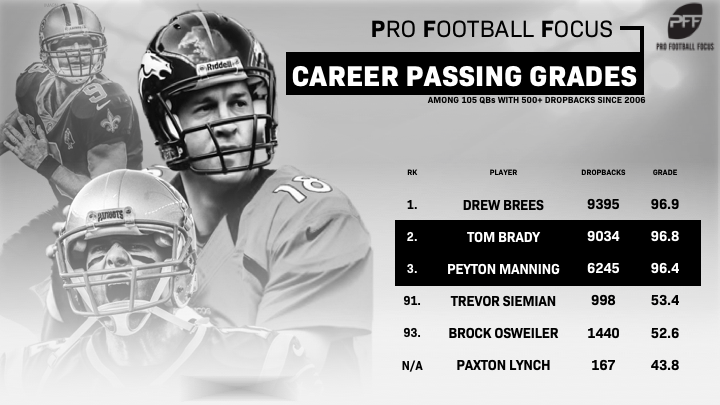 Now that he’s in New England though, Thomas will be back in the company of an elite quarterback in Tom Brady.

The six-time Super Bowl champion ranks second in the PFF era in passing grade at 96.8, third in big-time throws at 420, and has one of the NFL's lowest turnover-worthy play rates. By joining the Patriots dynasty, Thomas will have been teammates with the two of the top three quarterbacks in terms of passing grade since 2006.

Throughout his career, Thomas has shown that the go route is his best route, and when targeted on such, he has recorded an elite 91.0 receiving grade while gathering 51 explosive plays (tied for third-most in PFF era), 1,677 yards (fourth-most), and 422 yards after catch (second-most). Thomas’ new quarterback, Tom Brady, has performed fairly well himself when a go route is involved, as the four-time Super Bowl MVP ranks first in the PFF era in go-route passing grade at 97.2 and first in yards from go routes with 6,800. Brady also ranks fifth in big-time throw rate, first in turnover-worthy play rate, and third in accuracy percentage when targeting these routes.

As of late though, one of Brady’s go-to routes has been the crossing route, and he has decidedly been the league's best passer when targeting such, ranking first in passing grade at 95.6, first in yards with 6,056, and first in accuracy rate. Thomas is no stranger to the Crossing route too, as he has the ninth-most targets and ninth-most receptions by a receiver on these routes since 2006.

The fit is there with Thomas in New England. Thomas’ three best seasons in terms of overall grade were the three seasons he had with Manning under center for all 16 games. Thomas’ last three seasons with quarterbacks Paxton Lynch, Brock Osweiler, Trevor Siemian, Case Keenum, and Deshaun Watson were full of inaccurate targets and very few big-time throws. As he joins Tom Brady and his premier offense, Thomas could find himself back in the top-tier class he was once at with Peyton Manning. However, there is still one question that remains: Will he be healthy enough to get back to that elite form?