CHICAGO, IL- NOVEMBER 27: Harry Douglas #83 of the Tennessee Titans is tackled by Bryce Callahan #37 of the Chicago Bears during the third quarter on November 27, 2016 at Soldier Field in Chicago, Illinois. (Photo by David Banks/Getty Images)

In today’s NFL, defending the slot is one of the most important things to do if you want to be a good football team. During the PFF era, throwing to slot receivers has been worth more expected points added (EPA) than throwing to outside receivers, which is why covering the slot is so important. Slot corners usually have to defend more ground and deal with more obstacles while defending the middle of the field. With that said, it should come as no surprise that the Chicago Bears, who recorded the best coverage grade (95.9) of the entire PFF era last season, also have (for now, at least) one of the best slot corners in the NFL in Bryce Callahan.

Callahan finished the 2018 season with a coverage grade of 81.3, ranking 11th out of 131 qualifying cornerbacks. He played a whopping 413 coverage snaps in the slot, which is the fourth-most at the position, and he allowed a passer rating of 78.9 on such snaps, ranking eighth. Callahan allowed just 0.69 yards per cover snap in the slot, ranking second at the position, putting him ahead of elite slot corners like Chris Harris Jr. (0.75) and Desmond King II (1.00).

Opposing offenses were well aware of how good Callahan is in the slot, as they targeted him only once every 8.6 cover snaps, making him the second-most avoided slot corner in the league last season. For perspective, Stephon Gilmore – who finished with the highest grade among cornerbacks – was targeted every 5.0 cover snaps in the slot, which makes him the fourth-most targeted corner when lined up inside. On top of that, Callahan allowed a reception just once every 11.5 slot coverage snaps, tying for fifth among corners. For Callahan to have 413 coverage snaps in the slot and to maintain such high levels of efficiency is impressive. 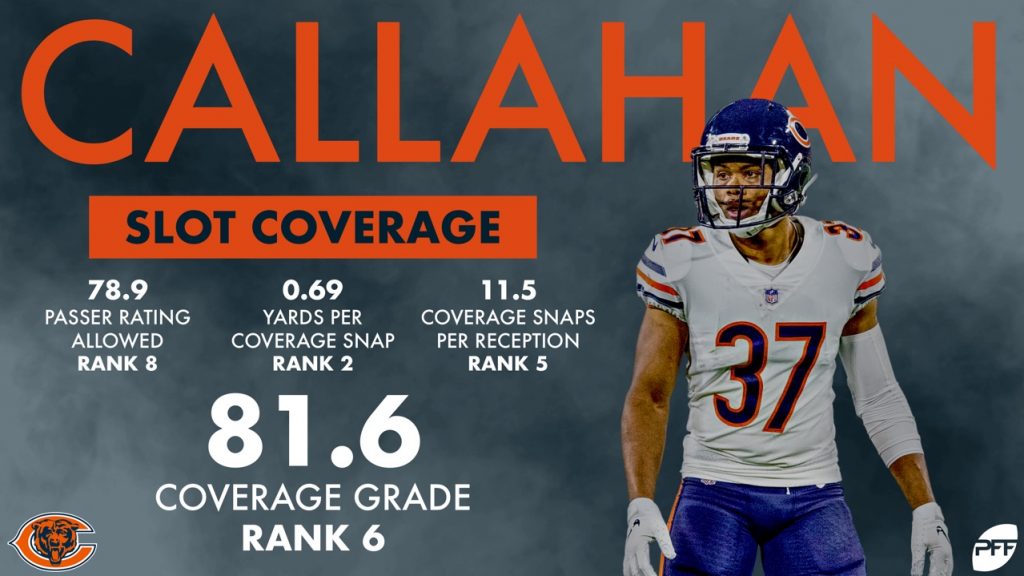 Taking it a step further, Callahan was also great when it counts most – on third down. Among 90 players with at least 25 third-down coverage snaps in the slot last season, Callahan had the eighth-best forced incompletion rate (19.1%) and the 15th-best passer rating allowed (87.6). He also had the 11th-best coverage grade (80.4) on third down.

Another thing that makes a good cornerback is discipline. In today’s flag-happy NFL, having the discipline not to commit penalties makes a cornerback that much more valuable. Callahan is one of only three cornerbacks with 300-plus regular-season cover snaps who didn’t commit a single penalty in coverage, and his overall grade is much higher than the other two guys (Shareece Wright, 60.8 and Avonte Maddox, 65.4).

In a league where you have to defend the likes of Julian Edelman, Michael Thomas, Keenan Allen, and many more great slot weapons, having a guy like Bryce Callahan only makes life easier. The Chicago Bears had a championship-level defense last season, and that should only continue in 2019 with Callahan playing stingy coverage in the slot. The former undrafted free agent has more than exceeded expectations, and he has increased his coverage grade each of the last three seasons. And at only 27-years-old, the sky really is the limit for the fifth-year cornerback.