Nick Chubb and Duke Johnson Jr. combined for 49 total touches in the Cleveland Browns’ first six games of the season, likely one of several factors that went into general manager John Dorsey’s decision to move on from Hue Jackson and his offensive coordinator, Todd Haley. In Freddie Kitchens’ two games as the Browns play-caller, Chubb and Johnson have become the focal point of the offense, combining for 63 touches, 431 yards (6.8 yards per touch) and six touchdowns in two weeks.

In Week 10, Chubb and Johnson led Cleveland to an upset win at home against the Atlanta Falcons, as the duo combined for 255 yards and three touchdowns – one of which coming from Chubb on a franchise-record 92-yard touchdown run. Chubb and Johnson earned 80.5 and 71.4 overall grade for their efforts, ranking fifth and 10th among backs with 15-plus offensive snaps in the week.

Kitchens went as far as to call multiple offensive plays with Chubb, Johnson and the team’s third running back, Dontrell Hilliard, all on the field at once in a full house look. He really couldn’t make it any more apparent that he valued the playmaking ability of his two superstar backs.

Kitchens’ use of Chubb and Johnson, though outstanding by all measures, isn’t a revelation; it’s common sense.

Johnson’s three-year receiving grade (89.4) ranks fourth among the 37 backs with 400-plus routes run since the start of the 2015 season. He also ranks first among the 37 running backs in forced missed tackles on receptions (51), third in yards per route run (1.85) and first in receptions of 15-plus yards (36). His resume was stunning top to bottom when Jackson & Co. started the season, but he still flew under the radar on his own team while the lumbering Carlos Hyde donned the cow bel as the team’s feature back. 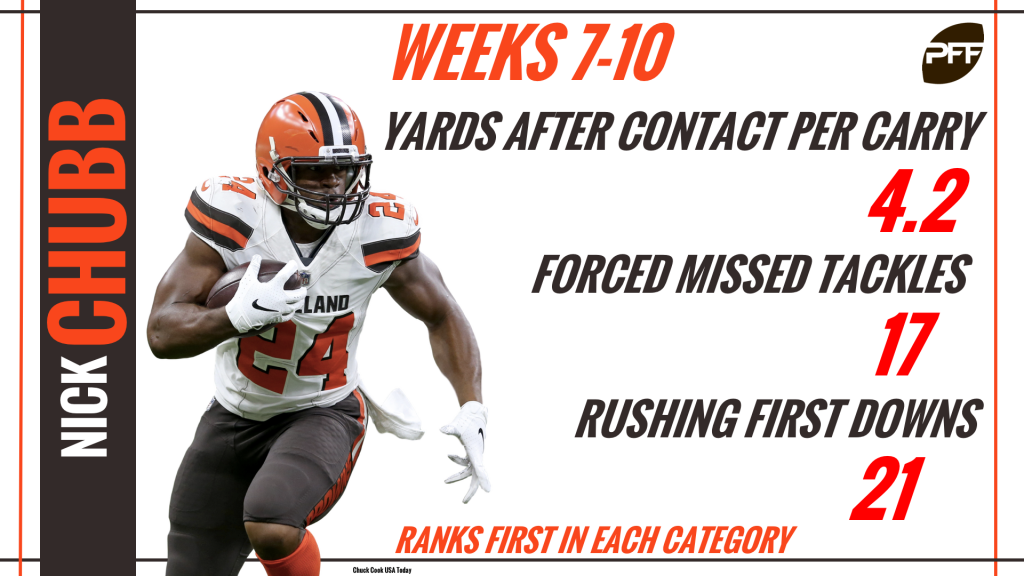 Chubb, of course, wasn’t exempt from backseat in the Browns’ offense, as he saw fewer offensive snaps than Johnson and just 16 touches before Dorsey traded Hyde to the Jacksonville Jaguars after the Browns’ Week 6 loss to the Los Angeles Chargers. Chubb now leads all NFL running backs with 150-plus offensive snaps in overall grade (90.5) and rushing grade (91.5). He also leads the 53 backs with 50-plus carries this season in forced missed tackles per touch (0.27) and yards after contact per carry (5.3) – the latter metric standing 43.2 percent above the two backs (Austin Ekeler & Royce Freeman) tied for second on the list.

Looking at just the four games he’s been the Browns’ feature back (Weeks 7-10), Chubb ranks first in forced missed tackles (17), yards after contact per carry (4.2) and rushing first downs (21).

Despite improving to 3-6-1 on Sunday, Cleveland is still on the outside looking in at a playoff spot and will need a lot more to fall in their favor to save the season in that regard. However, Kitchens’ use of Chubb and Johnson is a leap in that direction and a promising sign for the Browns’ and Kitchens’ future.