Joe Schobert has been an absolute iron man for the Cleveland Browns since the start of last season. In the 2017 regular season, Schobert played every single defensive snap – all 1,068 of them. He was one of only 11 linebackers to play over 1,000 snaps along with teammate Christian Kirksey. This season, it was more of the same with Schobert playing 100 percent of the defensive snaps before going down with a hamstring injury last week in the game against the Los Angeles Chargers.

There isn’t a definitive timetable on how long Schobert will miss with the ailing hamstring, but it is clear that the injury to the defensive signal-caller will be costly to the Browns' defense while he remains out. The biggest hit to the Cleveland defense will be the absence of Schobert’s coverage ability over the middle of the field, which is not necessarily what one would expect from a former edge defender turned off-ball linebacker. Quietly, he has been the best coverage linebacker in the NFL this season.

All of that goes to say that Schobert was more accustomed to getting after the passer than he was to dropping into coverage early on in his career. That’s what makes his ascent to the top-graded coverage linebacker in the NFL all the more interesting. 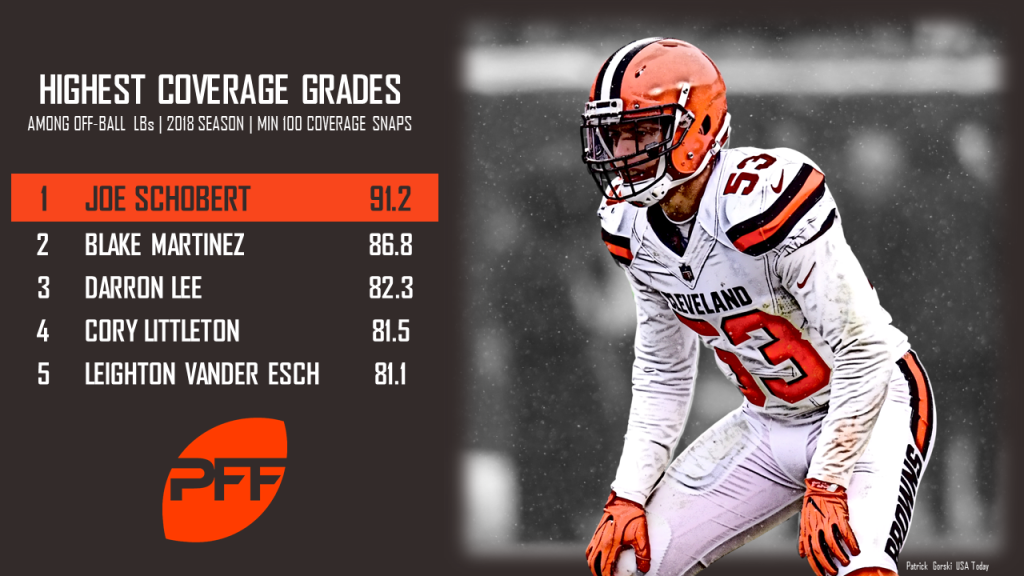 This season, Schobert has been targeted 11 times in coverage and has allowed six receptions for just 50 yards while racking up three pass breakups and an interception. To go along with that, he has the most coverage snaps per reception allowed (34.7) and the fewest yards allowed per coverage snap (0.24) among qualifying NFL linebackers. His coverage grade of 91.2 on the season ranks first among all linebackers.

Just last week, before the injury, Schobert ran onto an Antonio Gates’ out route from the slot, closed on the ball and broke up the pass from Philip Rivers before Gates had a chance to catch it. Those are the sorts of plays that Schobert has been making for the Browns' defense that they will have to replace in the coming weeks.

Kirksey will likely move inside and take over the play-calling duties that Schobert has been responsible for this season. However, he and Jamie Collins had played plenty alongside Schobert prior to the injury. With linebacker James Burgess also likely to miss next week with a hamstring injury, the Browns will have to look elsewhere for their third linebacker.

One potential solution is Genard Avery. The rookie Memphis product has been playing as an edge defender for the Browns this season after transitioning to the position in his final season at Memphis last year, but he does have experience as an off-ball linebacker and could be moved around to help fill the depleted linebacking corp. In fact, in the 2016 season in which Avery played 76.1% of his snaps as an off-ball linebacker for Memphis, he picked up a very strong coverage grade of 80.0.

Regardless of how the linebacker position shakes out over the next couple weeks while Schobert recovers, the Browns are venturing into uncharted territory. They will be playing defensive snaps without Schobert, something that they have not done since 2016. In a league where linebackers are constantly schemed against for mismatches and tested in coverage, Schobert has been the best in the business this year in that regard. It is an unlikely ascent for a former edge rusher to become the top coverage linebacker in the NFL through six weeks, but that is what the Browns are now tasked with replacing.