Breaking down running back vision

Six years ago, the entire draft community – general managers, scouts, analysts, writers and fans alike – collectively swung and missed harder at a prospect than at maybe any point in the history of the NFL. On April 26, 2012, Alabama running back Trent Richardson was selected with the third overall pick by the Cleveland Browns. A year later, after a lackluster rookie season, the Indianapolis Colts would give up their upcoming first-round pick in a trade for Richardson. When he took his final carry in 2014, Richardson wasn’t just a draft bust, he was statistically one of the worst running backs of all time.

While another running back garnering ‘best prospect since Adrian Peterson’ headlines in this year’s draft, it’s important to understand exactly where the world went wrong in their evaluation of Richardson. What did so many miss in their evaluation that a terrible running back was called generational? The answer is his vision. Or more accurately, his lack thereof. It was a skill he never needed to succeed behind one of the best offensive lines in college football at Alabama, but in the NFL it’s a prerequisite for success. How could so many overlook this all-important trait en route to giving Richardson a near flawless evaluation?

The thing about vision is that it’s difficult to quantify. Size, speed, power and even elusiveness can be measured to some degree, but vision is a far more subjective trait. Before getting into that, let’s define exactly what I mean when I say vision. A few separate traits go into the catch all term ‘vision’ for me personally. They are:

I also believe there is a fairly stark contrast between open-field vision and between-the-tackles vision (a misnomer for a lot of run concepts, but there’s not really a better term for it). This is why someone like Devin Hester isn’t automatically a great running back and not a lot of running backs are great kick/punt returners. For the purposes of this article, though, we’ll be focusing on between-the-tackles vision, as it still represents a vast majority of most running back carries in today’s NFL. Let’s break down each aspect of vision and what they mean.

The cardinal sin at the running back position is stopping one’s feet in the backfield. Le’Veon Bell is the only running back I’ve ever seen come close to getting away with it, but even he rarely comes to a standstill and rather is constantly shuffling forward, albeit slowly. That’s because it takes a long time to reach full speed from a standstill while one explodes far more quickly from a light jog. Stop your feet, and you’re a sitting duck for defenders.

However, the opposite is also an issue. Getting up to full speed before even taking the handoff limits one’s options severely and makes it nearly impossible to change course if the initial point of attack is jammed up. There’s a healthy balance between the two that running backs need to strike.

You’ve likely heard the term one cut runner and it’s an admirable trait. It’s a back that maintains a healthy pace until they’ve deduced the hole they’re going to hit. Then they crank it up to full speed. Backs like Ezekiel Elliott and Jordan Howard personify this. Their ability allows the offense to stay on schedule, as it generally avoids negative plays.

On his third step after the handoff, he’s already made his decision and explodes to where he thinks the hole is going to be. The blocking on the edge is far from clean, but it’s good enough to form a crease for that split second that Elliott hits it. Any more hesitation on his part and this is a two- or three-yard run instead of the nine yards he picks up. 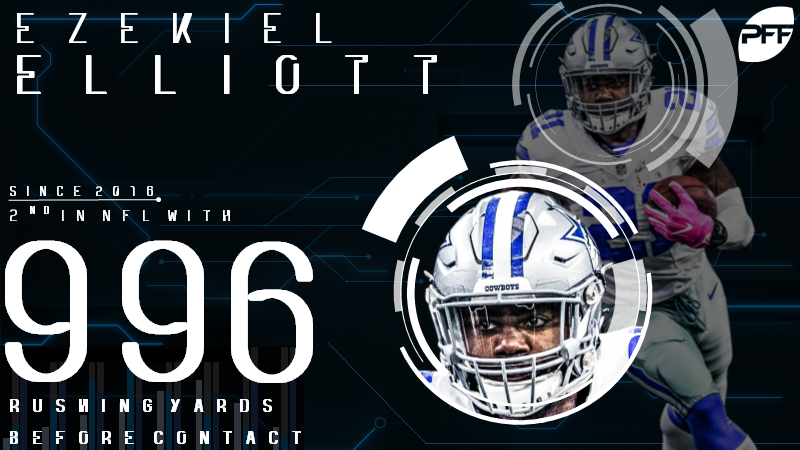 This is true vision. This is deducing the best hole to run through on any given play. Pacing and decisiveness maximize this. Not all run concepts employ the same reads from the running back. With each run concept, every team will have their own coaching points and specific reads for the running backs, but there are some rules that are universal.

On zone runs, there is no defined point of attack, as the running back has to quickly assess the leverage of the blocks from front side to back side in order to find the best hole.

Below we see Dalvin Cook putting on a master class of how that’s supposed to look.

As he takes the handoff, you can see his eyes are focused on the edge. Before he even gets the ball, he’s reading the leverage of that block to see if a bounce to that side is a viable option. A split second after the handoff, his eyes turn to the playside linebacker, who is already coming downhill to fill the A-gap, meaning that’s not a viable option. One more step and his eyes have turned all the way backside to behind right tackle Mike Remmers. Finally, he’s found his space. With no indecision, Cook plants his foot in the ground, cuts upfield and his natural talent takes over from there.

Outside zone has a lot of the same read principles as inside zone, just with a much wider track. The edge block is also far more important here and it means that more discipline from the running back is required. On this Howard carry for the Bears' Week 3 win against the Steelers, you can see why.

On first glance, this might look like a gaping hole, but upon further review much of that is due to Howard’s vision. There’s a completely unblocked cornerback in the hole. On outside zone, the running back is supposed to press the contain of the defense until that’s no longer a viable option. Doing so here puts 56 (Anthony Chickillo) and 25 (Artie Burns) in a pretzel. Because of the tight bunch formation, both defenders act as if they have contain and Howard’s patience opens up a huge running lane for himself to cut upfield. That hole isn’t there if Howard doesn’t understand the core tenets of the running play and instead decides to bust it through the hole once he sees daylight.

On gap and power runs there’s often a more defined running lane, but from there leverage still needs to be assessed on the key blocks at the point of attack.

Here is Alex Collins running a power play this past season against the Packers. Collins averaged 4.7 yards per carry on power/counter runs this year (league average is 4.3) behind a fairly shabby offensive line – much of the reason being his superb vision.

Almost always, the ball is going to hit off the edge frontside on power/counter. Cutting backside is a fool’s errand with the leverage of the offensive linemen. Collins knows it and the defense knows it. That’s why you’ll often see linebackers flow so quickly over the top into the running lane. Collins though, knows that defenders often get greedy and the running back takes a track towards the line of scrimmage that suggests he’s willing to cut back at any second. Of course, all he’s doing it setting up the contain player to dive inside because if he hits where the ball is supposed to go, immediately the run would go for a minimal gain. There’s no hole there if he aims at the edge immediately and sprints towards it.

On the opposite side of the coin, going against an offensive lineman’s leverage is the kiss of death in the NFL. Defenders are too fast and too good at keeping their body clean to think you can sneak through their gap or bounce outside their contain when not part of the play design. It almost never works and is a terrible habit in college running backs. It’s a weapon at the college level for two reasons:

You can pretty much throw away any large gain in college that comes from bouncing wide, as they will not translate to the league.

This is next-level vision and it goes hand in hand with reading leverage. To go back to Bell’s outlier pacing: it’s his ability to set up blocks and explode from a standstill that allows him to have the pacing he does. Offensive linemen are often only holding on for dear life and when they don’t have full control of a block, simply running off their free shoulder isn’t going to work. If you’ve ever heard the term ‘pressing the hole,’ this is what it means. Making a defender commit to a gap before cutting into the adjacent one is a rare skill that few possess, but when done correctly is the difference between a lot of good and great runners. 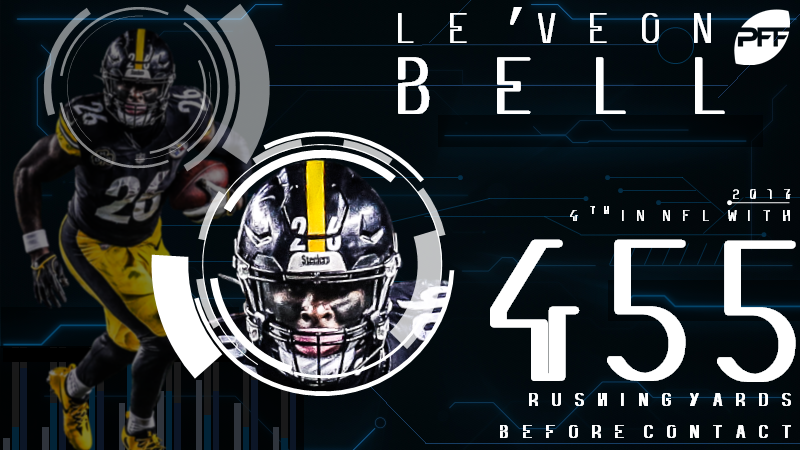 This is what made an average athlete and undrafted free agent like Arian Foster an All-Pro.

In the play below, we have Bell showing us how it’s done not once, but twice on the same play.

At the line of scrimmage, he presses the C-gap long enough for the linebacker to completely commit, then he dances outside of the block. At the second level he stays on the tight ends left shoulder again until he’s seen the safety commit and then darts to where the safety isn’t. If he tipped his hand earlier at either level, the defender could adjust and the blocks wouldn’t be nearly as successful. It’s a symbiotic relationship between runner and offensive line that makes both look good.

That is the long and short of what I look for when evaluating running back vision. With it in mind, the all-important trait can be somewhat quantified, or at least more accurately assessed, like anything else. Seeing as how it was the sole factor in a generational running back prospect turning into one of the biggest busts of all time, I’d say accurately assessing it is a pretty big deal.