Sometimes a draft pick just makes perfect sense, whether it fills an immediate need or the pairing of player and scheme mesh with regard to skillset and usage pattern. Here’s a look at the best fits from the 2019 NFL draft, including a few that we anticipated in the weeks and months leading up to the draft.

With Adrian Amos added to fill more of a strong safety role, Savage can play free safety in defensive coordinator Mike Pettine’s scheme. Savage’s sub-4.4 speed is immediately evident, as he accelerates in a hurry and compresses passing lanes as well as any safety in the draft class. He adds range no matter where he plays on the back end, whether playing deep free safety or closer to the line of scrimmage in more of a “robber” role. Expect Green Bay to tap into his versatile skillset.

An excellent fit that we pegged prior to the draft, Tillery adds a much-needed pass-rushing presence on the defensive interior for the Chargers. He tied Quinnen Williams for the top pass-rushing grade in the nation last year at 92.5, and his presence puts offenses into more of a bind with strong edge defenders Melvin Ingram and Joey Bosa already on the roster. Throw in Tillery’s No. 1 grade in the draft class on stunts, and the Chargers’ front four can now bring pressure from all angles. 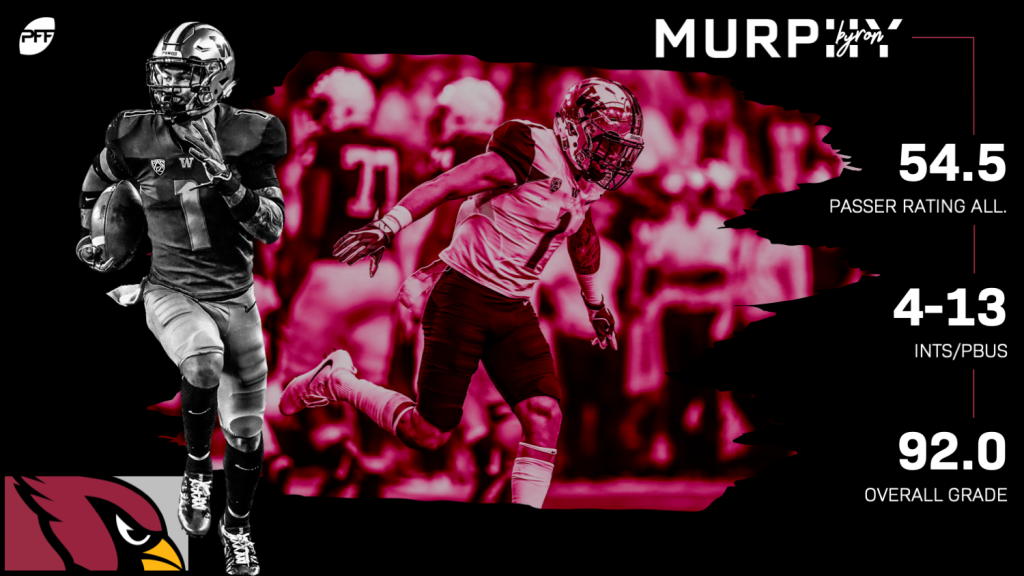 Obviously, we believe the No. 1 cornerback on the PFF draft board is a good fit for anyone, but even more so when seeing Murphy going to a zone-heavy defensive scheme in Arizona. We pegged Murphy as the best pure zone cornerback in the draft due to his ability to recognize route concepts and quickly maneuver into position to make plays while hitting hard and efficiently finishing tackles. Murphy led the nation with a 92.1 coverage grade last season playing a scheme that dabbled in press man coverage but mostly had him playing with his eyes on the quarterback.

Head coach Kyle Shanahan covets receivers with route-running skills, and that’s where Samuel fits in with the 49ers’ offense. He is shifty enough to create separation both outside and in the slot, and his aggressive after-the-catch skills led to an impressive 40 missed tackles forced on only 148 career catches. Expect Samuel to move around the formation while adding a receiving threat at all three levels of the field. 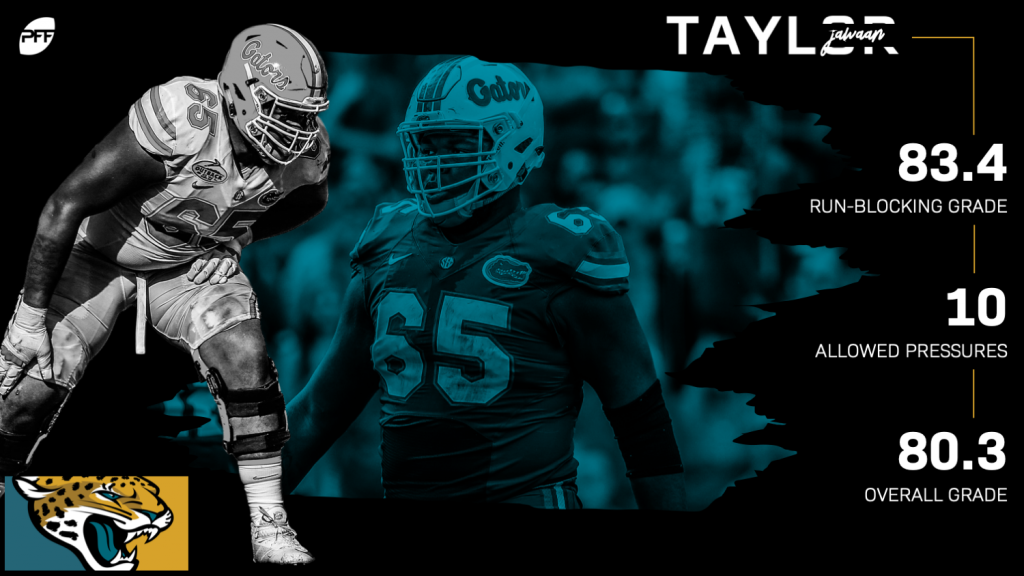 After smartly letting the board come to them in the first round with Kentucky edge defender Josh Allen, the Jaguars grabbed another first-round talent in Taylor in the second. He can step right in right away at right tackle, where he brings a powerful presence to the run game with the ability to locate second-level defenders with his size and length. Taylor’s power game fits with what Jacksonville wants to establish on the ground in order to play to new QB Nick Foles’ strength as a downfield passer.

Another great fit for the Cardinals, Isabella is an undersized deep threat who will get plenty of opportunities to stretch the field in the Cardinals’ new offensive scheme. He ranked second in the nation in deep receiving yards last year with 705, ranking only behind new teammate Hakeem Butler’s 721. Isabella gets down the field with 4.31 speed and good ball-tracking skills, making him more of a vertical threat than a shifty slot receiver, though his after-the-catch ability makes him a weapon in the short game as well.

The Eagles have done a fine job of building their offense with a variety of different styles of playmaker and Arcega-Whiteside adds one of the most unique skillsets in the draft. He was nearly unstoppable at the catch point at Stanford, leading the draft class in contested catches in each of the last two years, some of which were reminiscent of a power forward posting up in basketball. Arcega-Whiteside has both strength and body control at the catch point, making him a red zone and back shoulder weapon for QB Carson Wentz who led the league in accuracy percentage on tight-window throws back in 2017. He can get back to that level of efficiency with a player like Arcega-Whiteside. 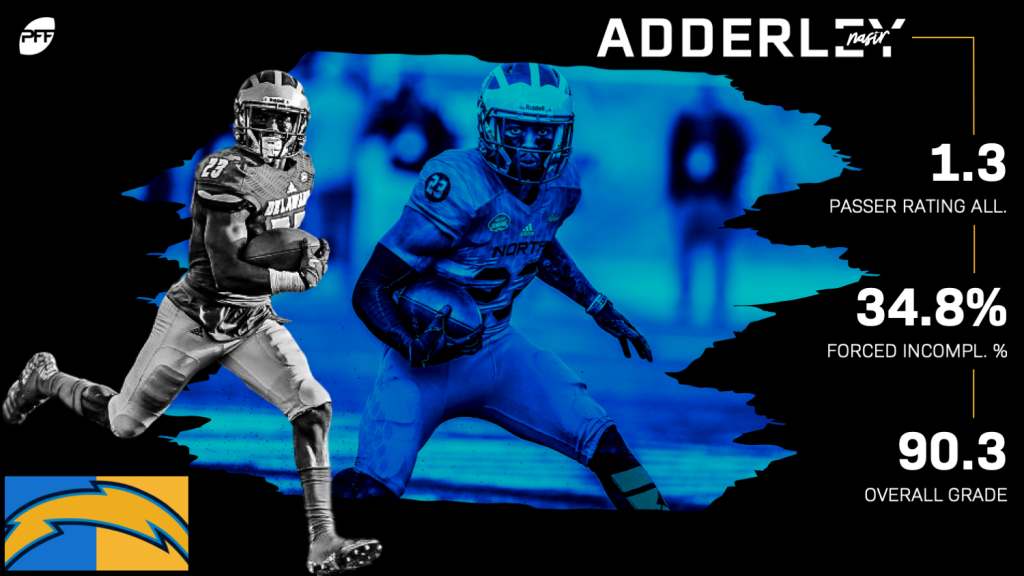 Another excellent pick by the Chargers, Adderley is a much-needed true free safety to complement the prototype at strong safety in last year’s first-rounder, Derwin James. While James can do his damage close to the line of scrimmage, Adderley patrols the deep middle with excellent range and ball skills, a must for defensive coordinator Gus Bradley’s scheme. We mocked Adderley to the Chargers in the back end of the first round a few times prior to the draft, and he’s an outstanding value for Los Angeles in the second round.

While Metcalf is not as good of an all-around receiver as others in the class, he’s a special combination of size and speed that can dominate press coverage and create opportunities in the vertical passing game. He’s now paired with the top quarterback in the league at over-the-shoulder downfield throws in Russell Wilson, so look for Metcalf to have plenty of opportunities to create big plays. Wilson also has the accuracy and velocity to get the ball to Metcalf on back-shoulder opportunities. Seattle is a perfect home for Metcalf’s unique abilities.

Prior to the draft, we compared Johnson to former Steelers wide receiver Antonio Brown, so the fit here is obvious. We’re not predicting a Hall-of-Fame career for Johnson, but he adds sharp-cutting route running and a knack for getting open that the Steelers need to tap into with Brown’s departure. Johnson has a path to the field immediately given the inconsistency surrounding the rest of the receiving corps around JuJu Smith-Schuster, and Ben Roethlisberger may have a new favorite weapon in short time.