The 13th week of the 2016 NFL season is already underway, with the Cowboys' win over the Vikings on Thursday. As the action continues, be sure to watch these key one-on-one matchups in every remaining NFL game.

Best known for his speed on the deep ball, Ravens WR Mike Wallace has actually thrived this season on shallow crossing routes. He'll often face Miami's Byron Maxwell in Week 13, a player having somewhat of a revival after a poor 2015 season (52.3 overall grade) with the Philadelphia Eagles. 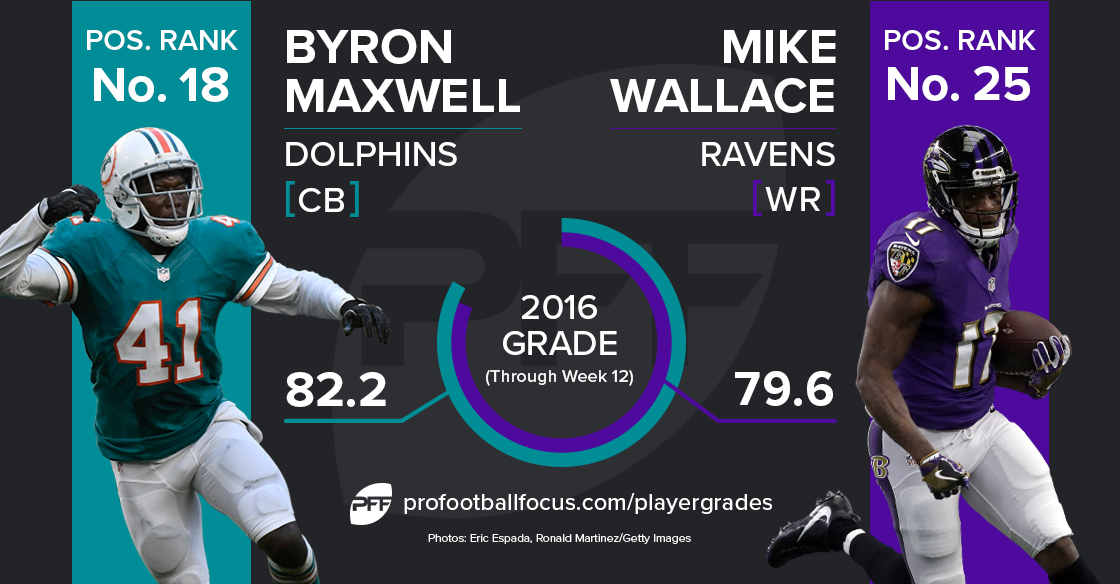 While 49ers QB Colin Kaepernick seems to be a repeated favorite among fantasy quarterback streamers in Week 13, Bears DE Akiem Hicks and the Chicago defense will attempt to limit his success. For Hicks, in particular, to be effective, he'll have to win the battle against 49ers rookie guard Joshua Garnett, who has seen limited success since first taking the field in Week 5. 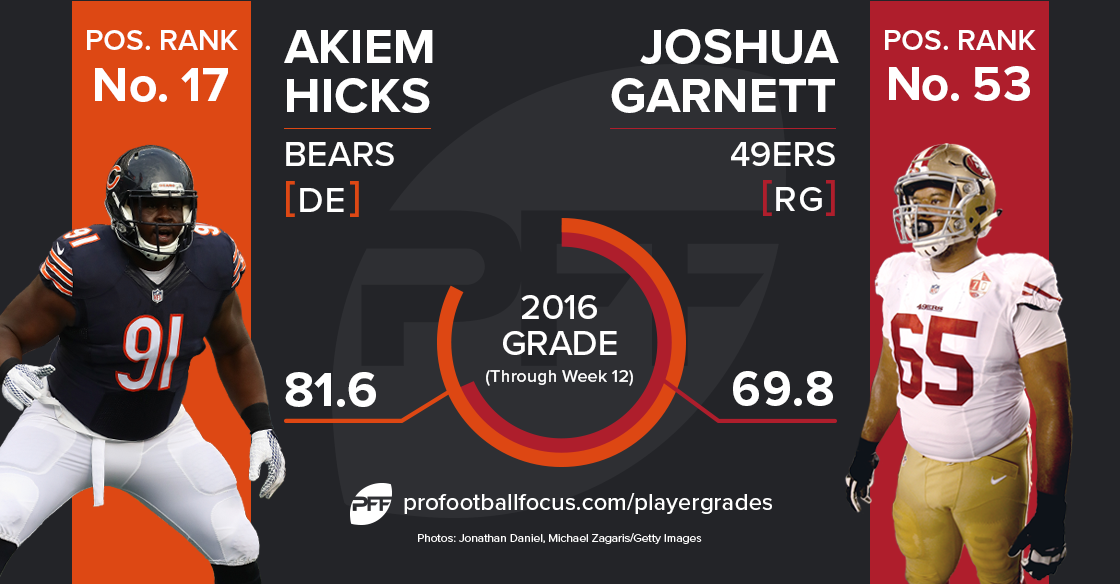 After earning the highest grade among NFL edge defenders in Week 12, Chiefs OLB Justin Houston returns in Week 13 to face one of his tougher tests of the season at right tackle, Atlanta's Ryan Schraeder. Against the Cardinals in Week 12, Schraeder did not surrender a single QB pressure in 39 pass-blocking snaps. 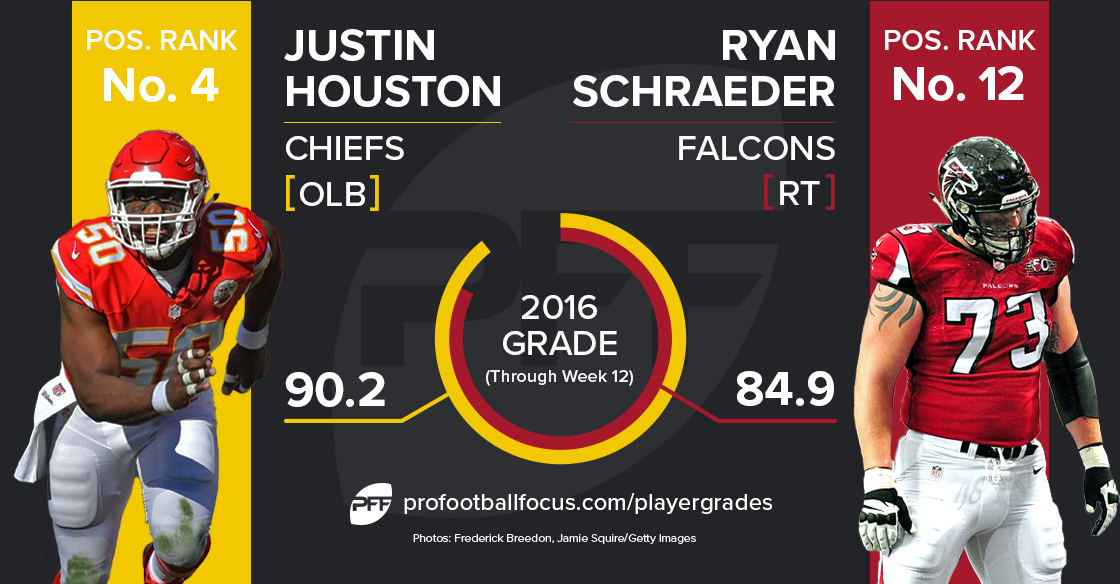 Like much of the Rams' offense this year, running back Todd Gurley hasn't quite met the expectations of Los Angeles fans entering the 2016 season. Gurley has been fairly average in most games, with his best mark coming back in Week 6 against the Lions. He'll have a tough time gaining momentum for the final stretch of the season in Week 13, however, facing a stout Patriots' run defense. 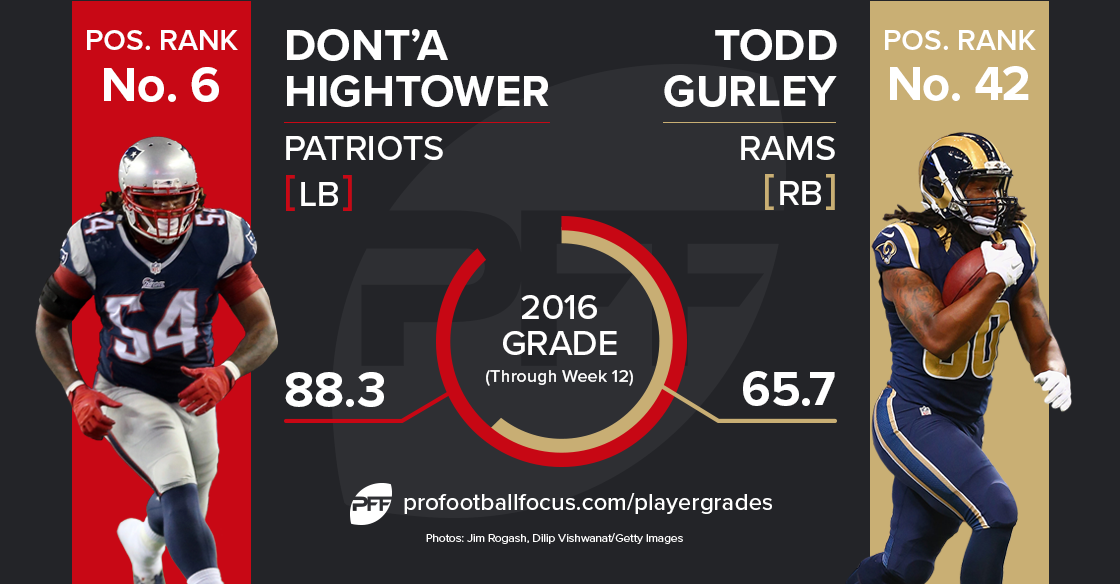 Coming off the back of a strong Week 12 performance against the Vikings, Lions CB Darius Slay will look to slow Saints rookie WR Michael Thomas on Sunday. This season, Thomas leads New Orleans receivers in targets (82), receptions (65), receiving yards (789), yards after the catch (340), touchdowns (seven), and missed tackles forced (14). 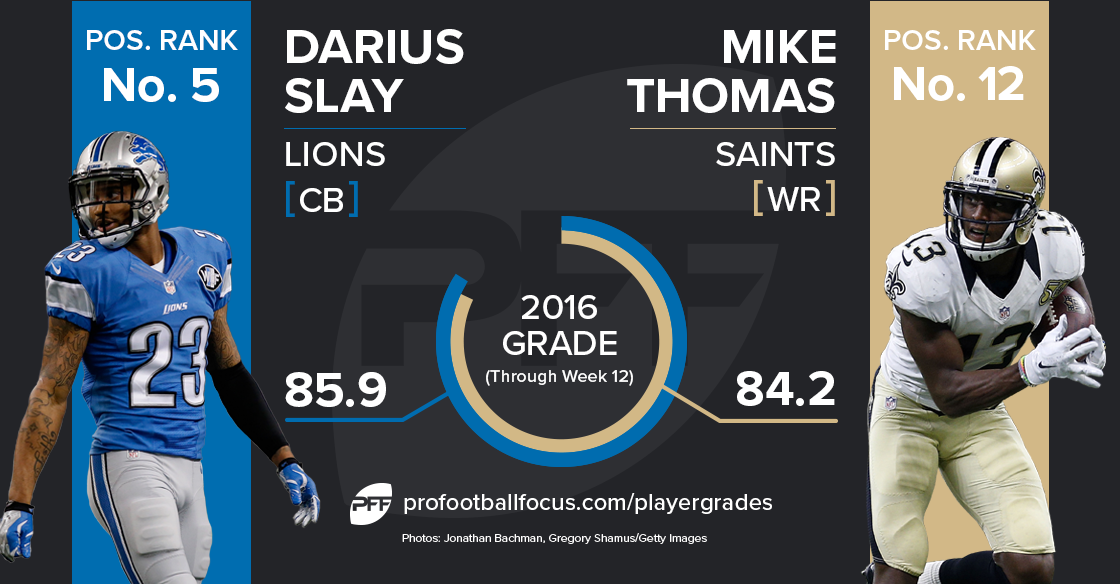 After missing the Eagles' Week 12 bout with the Packers due to a last-minute hospitalization, guard Brandon Brooks returns to the field in Week 13 to face one of the league's best interior defenders. Cincinnati's Geno Atkins has recorded 43 QB pressures this season, second only to Los Angeles' Aaron Donald (61) among NFL defensive tackles. 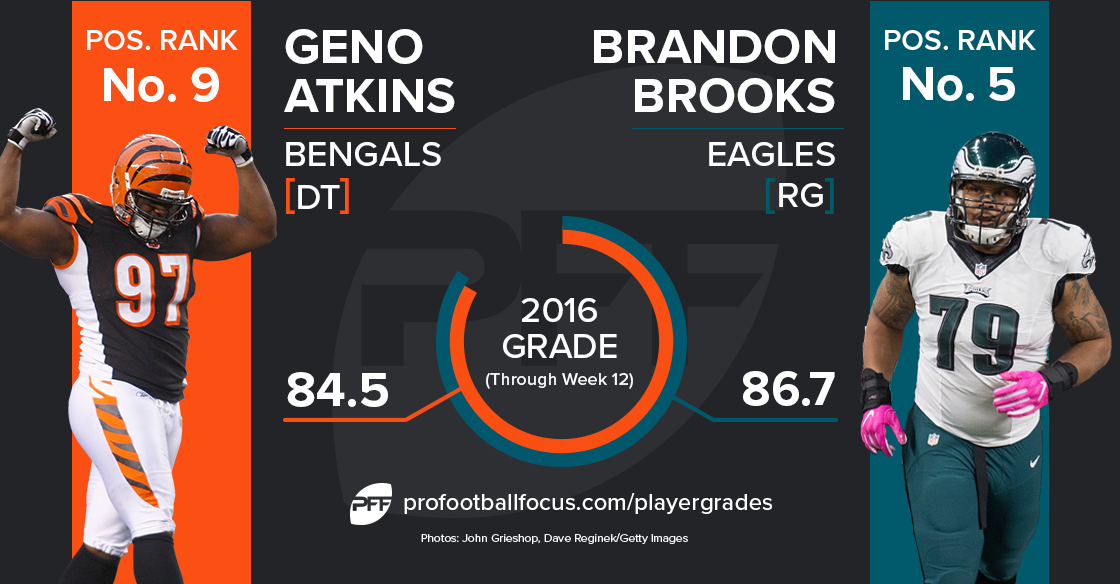 In Week 13, Jaguars defensive tackle Malik Jackson will get a visit from his former team, the Denver Broncos. Jackson will often face off against former teammate Max Garcia, who has played at a consistently average level since his Week 7 standout performance against the Texans. 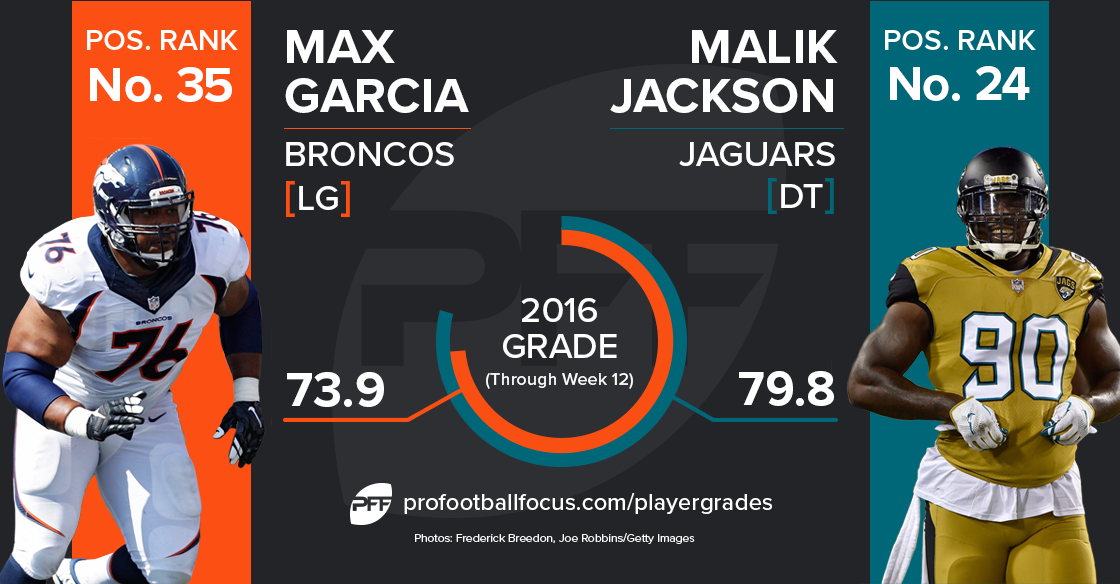 While Khalil Mack receives much of the attention on the Raiders' D-line (and rightfully so), outside linebacker Bruce Irvin has also produced a solid season overall to this point, earning the 12th-highest grade among NFL edge defenders. On Sunday, he'll battle Bills left tackle Cordy Glenn in an effort to reach QB Tyrod Taylor. 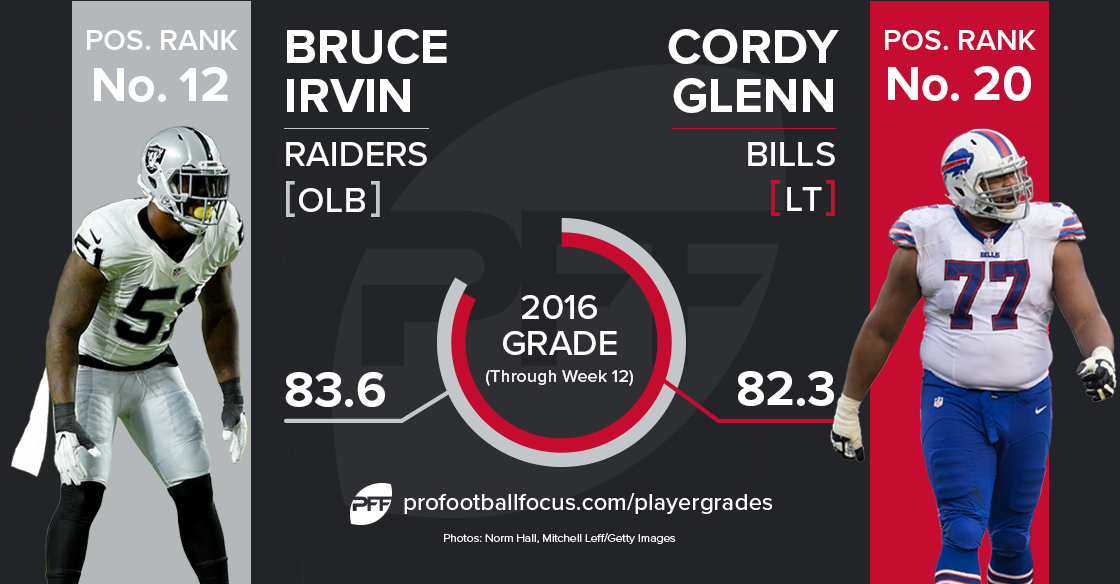 Off to one of the best starts PFF has ever seen from a rookie edge defender, Joey Bosa looks to continue his campaign for Defensive Rookie of the Year against RT Demar Dotson and the Bucs on Sunday. Since taking the field in Week 5, Bosa has recorded 39 QB pressures, fifth-most among NFL edge rushers in that span. 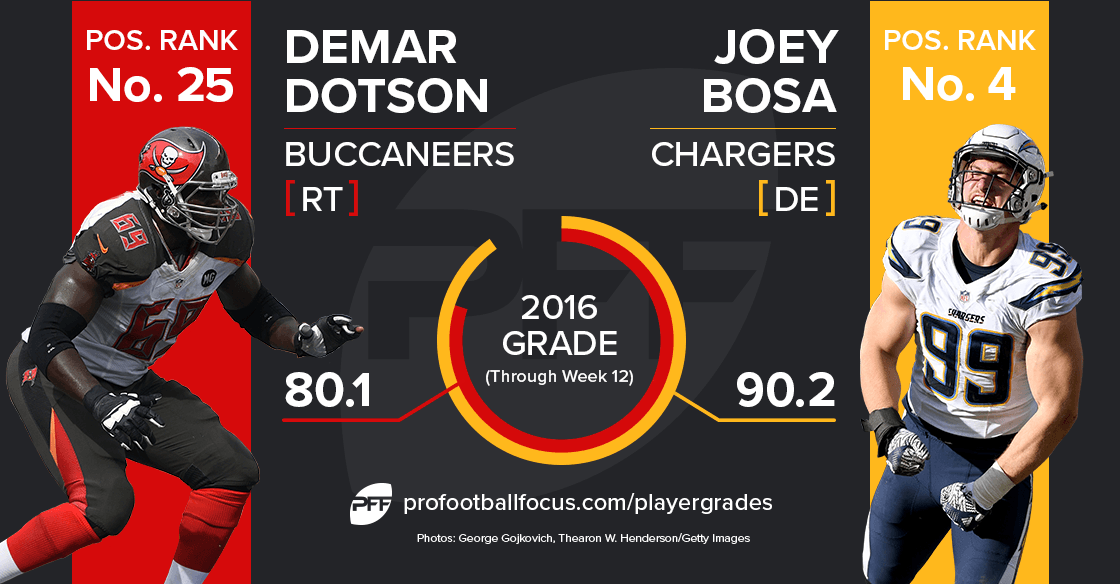 Over the span of the last two weeks, Washington's Kirk Cousins has been the league's highest-graded quarterback, with a 129.8 passer rating and six touchdown passes. In Week 13, though, he'll face a tough Arizona secondary that features CB Patrick Peterson, who has posted just one game this season with a passer rating over 66.7 into his coverage. 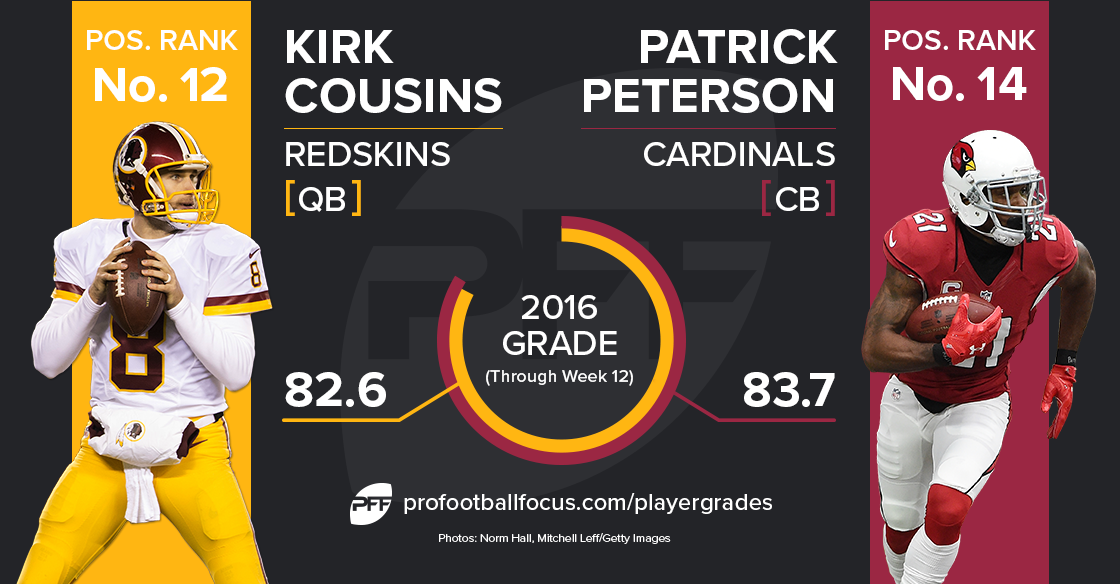 While Antonio Brown hasn't defended his title as the league's top graded receiver this season — at least through 12 weeks of play — he's still a threat capable of taking over a game, as proved on Thanksgiving night against the Colts. Former Rams CB Janoris Jenkins will be often tasked with slowing Brown; Jenkins surrendered just two receptions in each of the Giants' past two games. 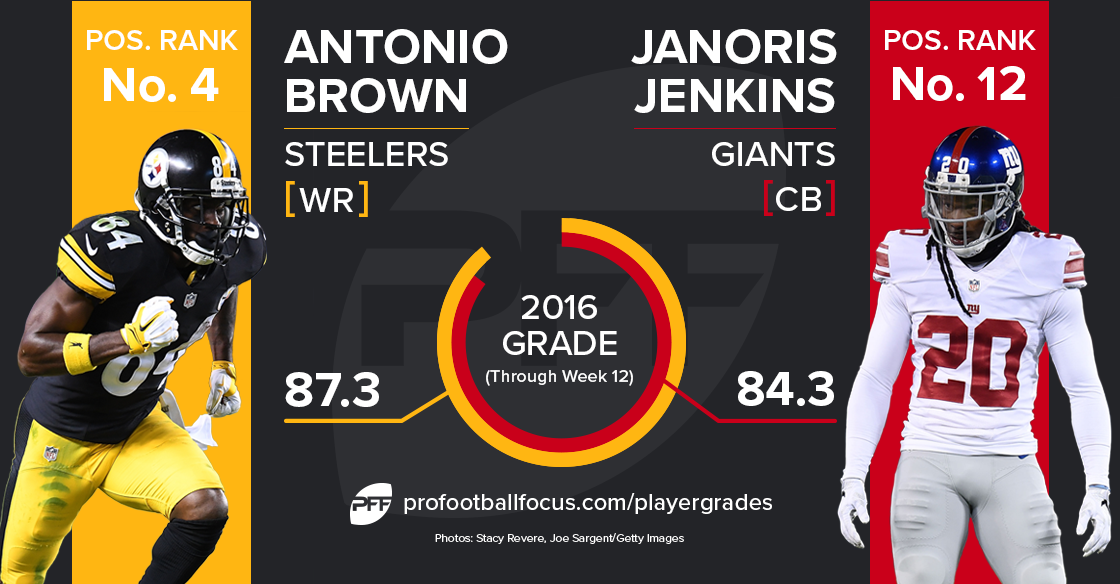 In a battle of strength versus strength, one of the league's top receiving tight ends will try to move the chains against a talented Seattle defense. The Seahawks, on the other hand, will be attempting to bounce back from their Week 12 loss to the Bucs, and will likely often rely on linebacker K.J. Wright to limit Olsen's impact. 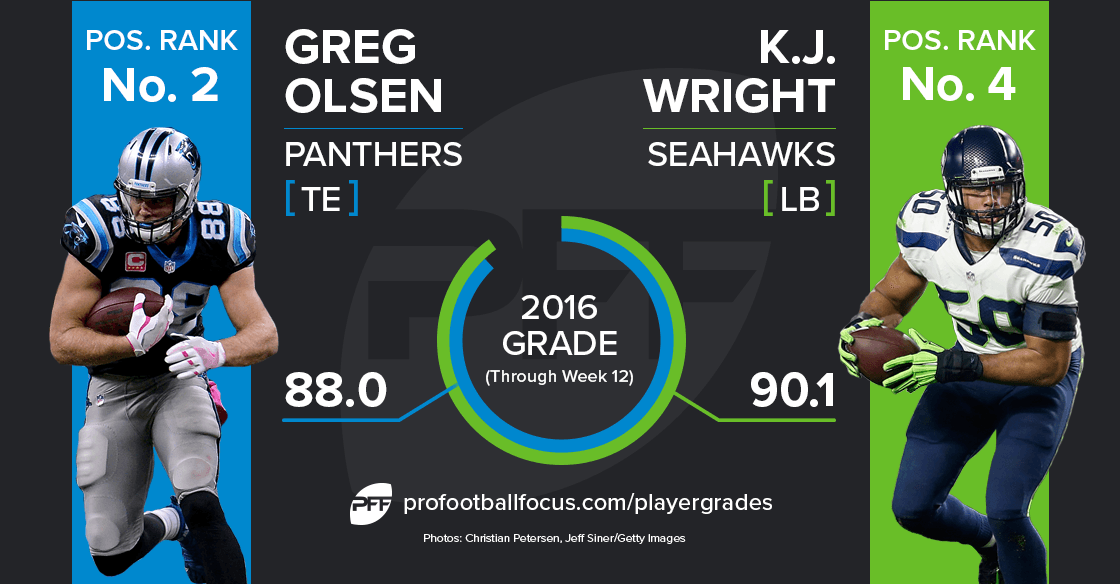 This season, Indianapolis' Andrew Luck has been under pressure at a higher rate than any other NFL quarterback (44.5 percent of dropbacks). Left tackle Anthony Castonzo will attempt to help better that mark in Week 13, though he'll face a tough opponent in Jets OLB Sheldon Richardson and the New York defensive line. 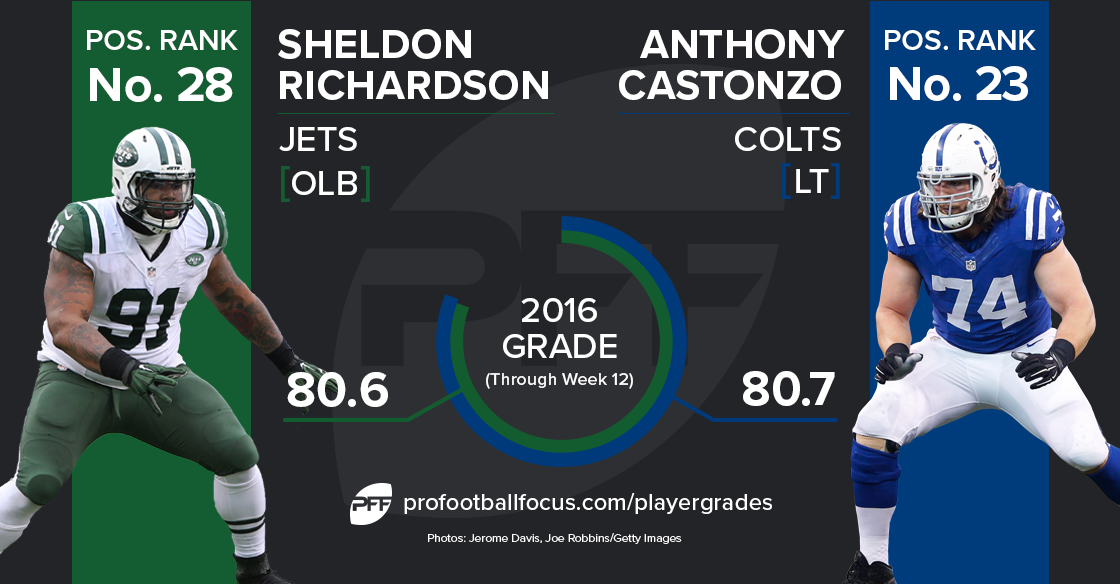