HOUSTON, TX - AUGUST 28: Brock Osweiler #17 of the Houston Texans throws a pass during a preseason game against the Arizona Cardinals at NRG Stadium on August 28, 2016 in Houston, Texas. The Texans defeated the Cardinals 34-24. (Photo by Wesley Hitt/Getty Images)

Here are the top takeaways from the Houston Texans' 34-24 preseason Week 3 win over the Arizona Cardinals.

After earning the worst playoff grade PFF has ever given to a quarterback in the NFC Championship game last season, Carson Palmer has a lot of critics waiting for him to struggle again this year. Against the Texans, Palmer missed on his only throw of 20 yards or more downfield, but did connect on all three of the passes he attempted between the numbers traveling 10 to 19 yards downfield.

Thanks to an interception, passes thrown the way of wide receiver Brittan Golden earned an NFL quarterback rating of just 45.8 against the Texans, but Golden himself had a good game. He caught all six of the catchable targets thrown his way for 80 yards, with those receptions coming against five different Houston defenders.

Cardinals fans got to see their first-round draft pick in action for the first time on Sunday afternoon, and he was far too good for the second- and third-string offensive linemen he went up against. A menace against the run, he registered two tackles resulting in a defensive stop, despite playing just 14 snaps in run defense.

The Texans took a gamble in signing Brock Osweiler for as much as they did this offseason, but with a performance like this, you can see what they like about him. Outstanding throwing the ball downfield, Osweiler completed two of the three passes of 20 yards or more downfield he attempted, with the incompletion coming as a result of a drop. In fact, Osweiler had just two incompletions on his 13 passing attempts, and both resulted from a dropped pass.

Wide receiver DeAndre Hopkins saw just two passes thrown his way against the Cardinals, but still managed to make an impact. Despite such limited work, he managed to force two missed tackles on one of his receptions, displaying fantastic change of direction to find more yards after the catch.

Get ready for the Texans’ 2016 regular season by checking out our Houston team preview (click the image below). 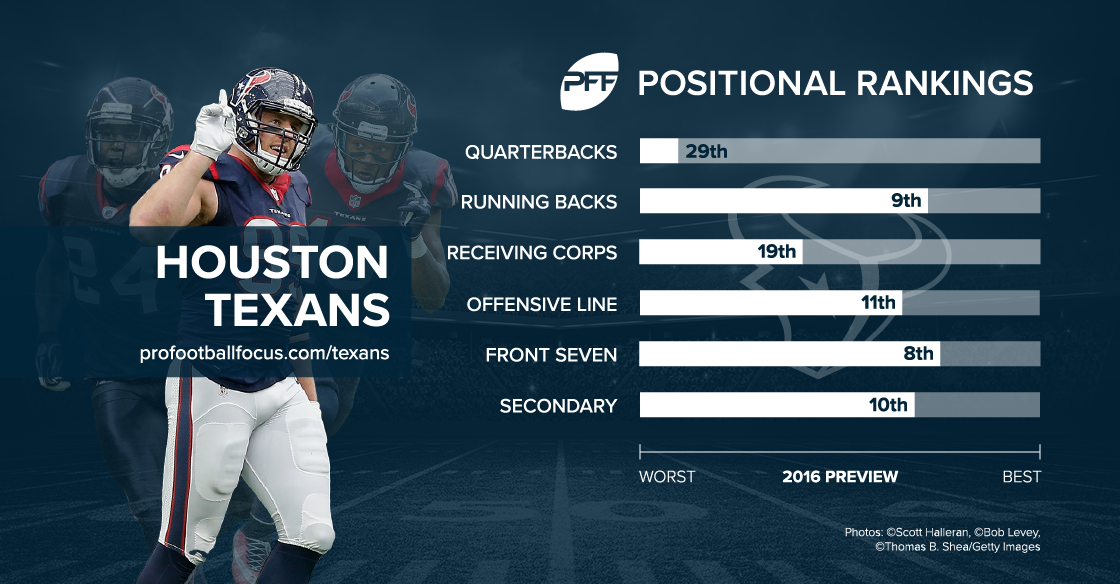