After a strong finish the 2018 season, Marcus Cannon will look to continue his upward trajectory

Since offensive line coach Dante Scarnecchia returned to the team in 2016, the New England Patriots have graded no worse than 11th in either team pass-blocking or team run-blocking grade over a season. After the 2016 season, after just one year of Scarnecchia at the helm, every player along the offensive line saw an improvement in their grade, but the arguably the biggest improvements have come from right tackle Marcus Cannon.

However, in the first six weeks of the 2018 campaign, Cannon struggled to find his footing, as he graded out as the 52nd-ranked tackle in football over that span. He particularly struggled in the ground game — he was on pace for a career-low grade as a run blocker — and he allowed 13 total pressures over his first five games. That led to Cannon spending time on the bench, as he split reps with former undrafted free agent LaAdrian Waddle until he was forced to miss Weeks 7-8 due to a concussion. 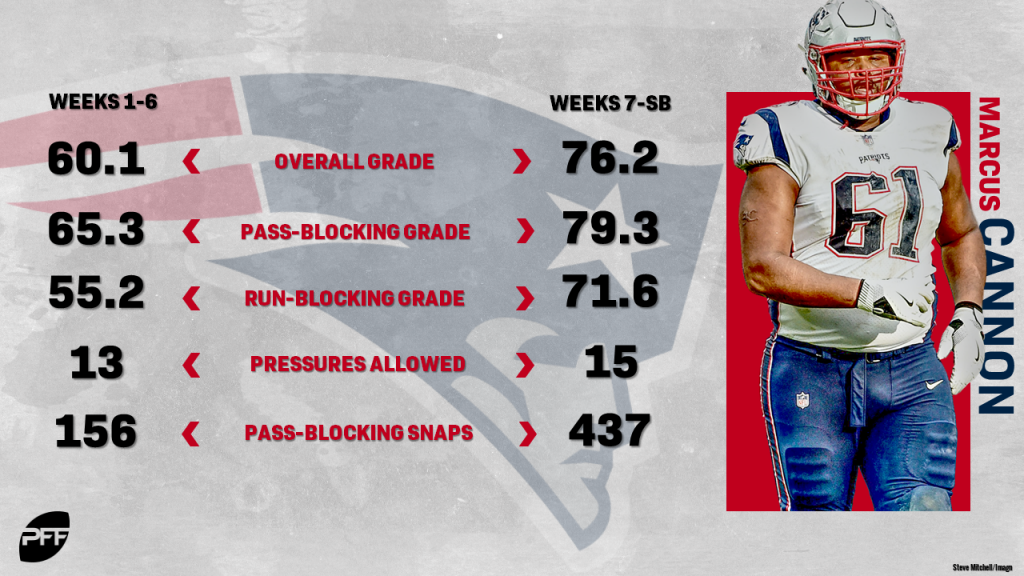 But after returning from injury in Week 9, Cannon was able to find his form and get back to the player he was in 2016. He allowed only 15 total pressures in the remaining 11 games on his way to a third Super Bowl ring in only eight seasons in the NFL. He also returned to his road-grading form and earned a 71.6 run-blocking grade that ranked 12th among tackles in that span.

On Super Bowl Sunday, the biggest Sunday of the year, the former TCU product finished the season by showing up for the Patriots against the Los Angeles Rams‘ vaunted defensive front, allowing only one pressure on his way to an overall grade of 70.0 – the best grade by an offensive lineman.

And that should come as no surprise. Although he has only played in two of the five Super Bowls the Patriots have been a part of since 2011, Cannon has only allowed five pressures on 117 Super Bowl pass-blocking snaps, and he actually earned the third-highest-graded Super Bowl performance (89.8) by an offensive lineman in the PFF era (since 2006) in the 2016 comeback victory over the Atlanta Falcons. 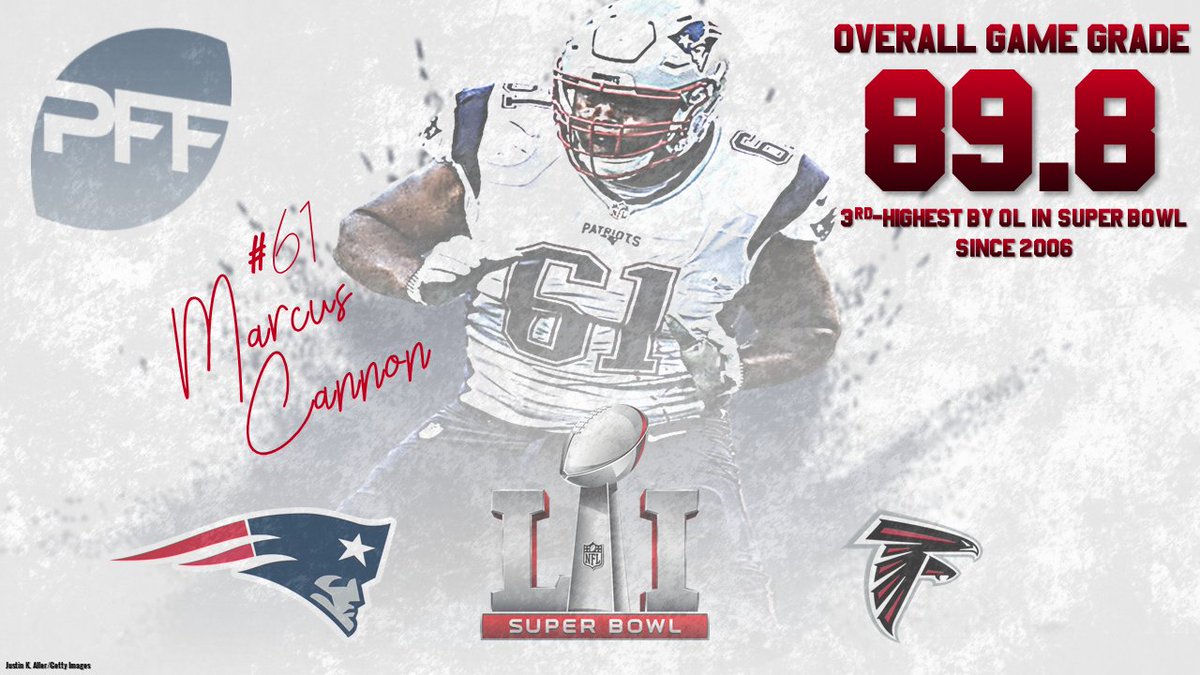 Throughout his career, injuries have been a concern for Cannon, but there is a reason for optimism following his 1,087-snap 2018 season, which was the second-best mark of his career. The pressure will be on next season, however, with 2018 first-round pick Isaiah Wynn presumably taking over at left tackle after spending his rookie year on injured reserve. The Patriots may very very need to count on Cannon for stability on the other side as Wynn gets accustomed to the speed of the NFL.

Prior to the Super Bowl, the Patriots’ offensive line was considered one of the biggest reasons the team made the deep postseason run, and after a performance that included zero sacks allowed and 2.04 yards before contact per rush in the big game, that mentality didn’t change. Cannon’s resurgence late in the season helped stabilize the unit on their way to yet another Lombardi Trophy, and the team will only hope he can continue his upward trajectory.