After years of seemingly endless turmoil, there’s no doubt that the Cleveland Browns franchise has finally started to trend in right the direction. To their benefit — and unlike many new coaching regimes that can require patience and a learning curve — new head coach Freddie Kitchens is plenty familiar with a young Browns offense that will look to take another step forward in 2019. Quarterback Baker Mayfield should have more than enough weapons at his disposal heading into his first full season as the starter, and while big names like Odell Beckham Jr. and Jarvis Landry will undoubtedly get a large share of the targets, let's take a look at the Browns’ impressive young pass-catchers Antonio Callaway, David Njoku, and Rashard Higgins — who all have the potential to make a big splash in 2019. 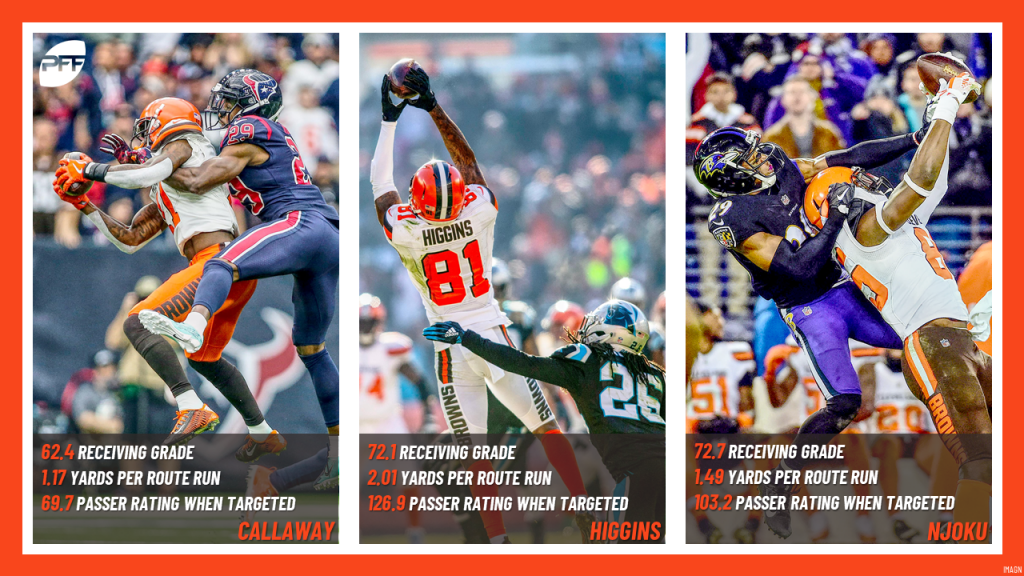 The youngest of the trio, Callaway put up promising numbers during his rookie campaign in 2018, finishing with 586 receiving yards, five touchdowns and a 63.1 receiving grade that ranked ninth among qualified rookies. Callaway’s skill set is made for the big play, and that came to fruition in 2018, as almost 50% of his yards came on deep passes (passes of 20-plus yards downfield). The young speedster’s explosiveness also made him effective with the ball in his hands, made evident by his 5.4 yards after the catch per reception— a figure that ranked higher than both Beckham and Landry last season. While there is room for improvement, Callaway has plenty of positives to build off going into his sophomore season.

Higgins will be entering his fourth year in the NFL in 2019, and the former fifth-round pick seems to be improving with each and every season that passes. After tallying just 389 total receiving yards over his first two years in the NFL, Higgins finished the 2018 season with 572 receiving yards and a receiving grade of 68.2, reaching career-highs in almost all categories. In what should draw hope for even further improvement in 2019, his production with Baker Mayfield at the helm was off the charts. With Baker under center for the Browns, Higgins caught a ridiculous 78.6% of his targets and had a 126.9 passer rating when targeted. Higgins also proved to be one of the most reliable deep threats in the league in 2018; among qualified pass-catchers, his reception percentage on deep pass attempts (69.2%) finished behind only Tyler Lockett and Michael Thomas last year.

The only former first-rounder of the bunch, the Browns drafted Njoku in the hope of him becoming a mismatch nightmare for opposing defenses. While Njoku has yet to live up to his original draft hype, the tight end has accumulated decent numbers over his first two seasons, accumulating a combined total of 1,025 receiving yards and eight touchdowns to go along with receiving grades of 71.1 And 65.8, respectively. Even with an underwhelming start to his career, like the rest of the franchise, there is still a lot of promise for Njoku primarily because of what he can do once the ball is in his hands. Despite finishing with just 56 receptions this past season, Njoku accumulated the third-most tackles avoided after the catch (10) at his position. Combine that with the fact that he gained almost half of his total yardage after the catch in 2018, and Njoku's future looks all the more bright.

While Beckham and Landry are likely to draw much of a defense’s attention, the Browns’ young pass-catchers should see plenty of favorable matchups in the upcoming year. There may not be a ton of volume to go around to all three, but this receiving corps should cause problems for many defensive coordinators throughout the 2019 season.