A healthy Talib is critical to Rams’ postseason success

Aqib Talib has proven himself to be one of the top cornerbacks in the league over recent seasons. Since the start of 2016, he is tied for the fourth-highest defensive grade among all cornerbacks with A.J. Bouye. Over that time, he has allowed a passer rating of just 67.2 on passes into his coverage, ranking third-best among the 111 cornerbacks who have seen at least 100 targets over that span, while his forced incompletion rate over the last three seasons of 19.6% ranks 11th among the same group. Needless to say, Talib is an impact player on the perimeter of any secondary.

That certainly holds true for the Los Angeles Rams this season. Talib missed eight games after undergoing ankle surgery following an injury in their cross-city matchup with the Los Angeles Chargers. With Talib on the field, the Rams have boasted one of the better secondaries in the league. With him on injured reserve, they were beaten often and beaten badly on the back end.

The team defensive statistics that show just that are pretty remarkable. In the games in which Talib started in weeks 1-3 and 13-17, the Rams pass defense surrendered a passer rating of 74.5 (third-best in the NFL) and 10.4 yards per reception (seventh-best). In those games, they allowed eight touchdown passes while intercepting 12 passes which was the best ratio in the NFL over those eight weeks. 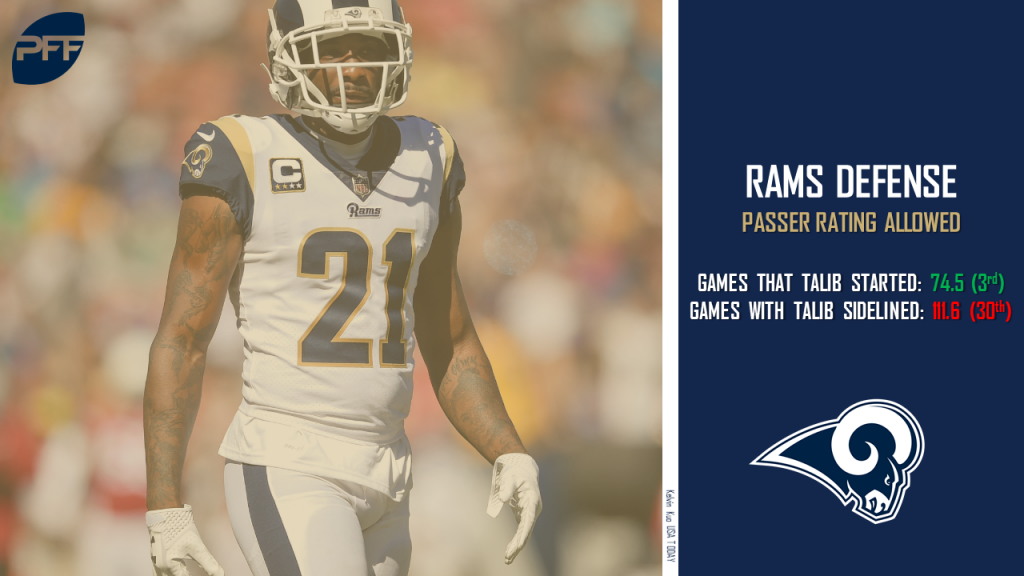 Contrasting those numbers with the eight games in which he was sidelined from weeks 4-12 shows just how vital he is to the secondary. Across those eight games, the Rams allowed a passer rating of 111.6 (third-worst in the league) while allowing fewer yards per completion than only the Oakland Raiders (13.2 yards per reception). In particular, they struggled with the big play. Over that span, no team gave up more completions 20 or more yards downfield (22) or passing yards on throws 20 or more yards downfield (819) than the Rams did. They were the only team to allow over 700 deep passing yards in those nine weeks.

Obviously, Talib himself has played a large role in that with his own play, ranking among the top 20 cornerbacks in the NFL in terms of overall grade this season. His effect goes beyond that, though. His presence on the field has resulted in improved play across the secondary. Perhaps the player happiest to have a healthy Talib back is his fellow outside cornerback, Marcus Peters.

With Talib in the lineup, some of the pressure has been taken off Peters to be the guy in the secondary, and it has shown in his overall grade. In games in which Talib has started this season, Peters has an overall grade of 78.5 which ranks 17th out of 118 qualifiers at the position across those weeks. In the games that Talib sat, his grade dropped all the way to 44.9 which was fifth-worst at the position.

So not only have the Rams gotten one of the top cornerbacks in the league back for the postseason, but the mere presence of Talib on the field has seemingly elevated the play of their other big secondary acquisition in Peters. For the Rams to deliver on the Super Bowl expectations that have been placed on them throughout the year, their defense will have to play up to the level of the defensive talent that they aggressively acquired. Aqib Talib is one of those critical pieces, and if this season is anything to go by, him being healthy for the playoffs is an excellent sign for the Rams.