No more quarter or half teams, this is the real deal. It’s time to unveil PFF’s All-Pro team for the 2018 NFL season. Obviously, our grades played a big role in the makeup of this team, but playing time and situation was taken into account as well to create the 2018 roster. Enjoy! 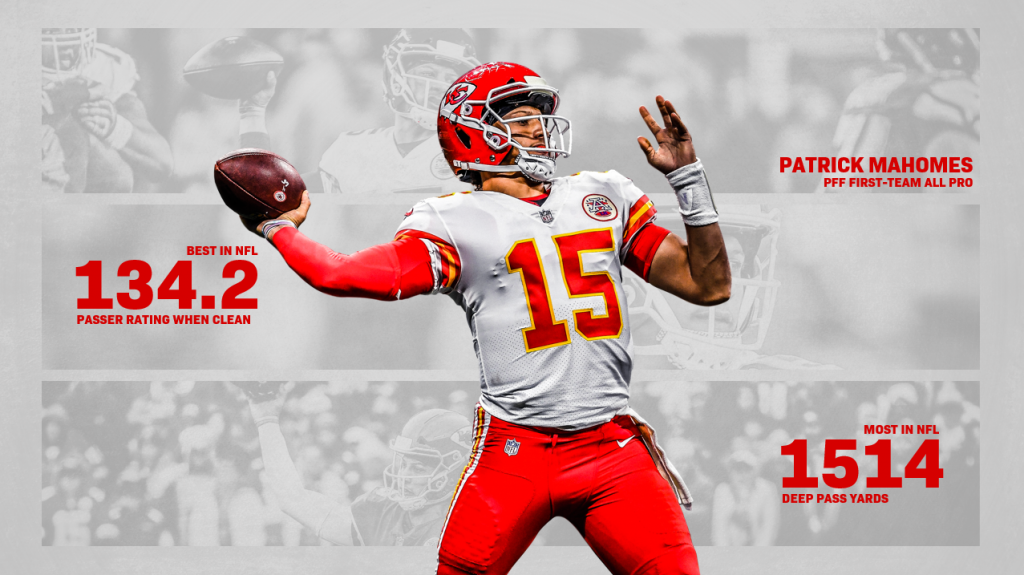 It was a tight one, but in the end, it came down to consistency. Mahomes had one game grade below 65.0 all season long while Brees had three such outings. The Chiefs quarterback may have been a bit more careless with the football, but you can’t argue with his playmaking ability. His 46 big-time throws were five more than any other quarterback in the league.

Statistics say the draft is often a crapshoot, but that’s not the case with a player like Saquon Barkley. The Giants running back was as advertised his rookie season after being drafted number two overall. His 71 combined broken tackles were the most of any player in the NFL.

What Kittle did with a melange of backup quarterbacks – and as a run blocker – was quite simply one of the best seasons we’ve ever graded from the tight end position. Not only did he break the record for most receiving yards in a season by a tight end, he broke the PFF record for yards after the catch by any position player for a single season. His 873 yards after the catch were 299 more than Kelce. 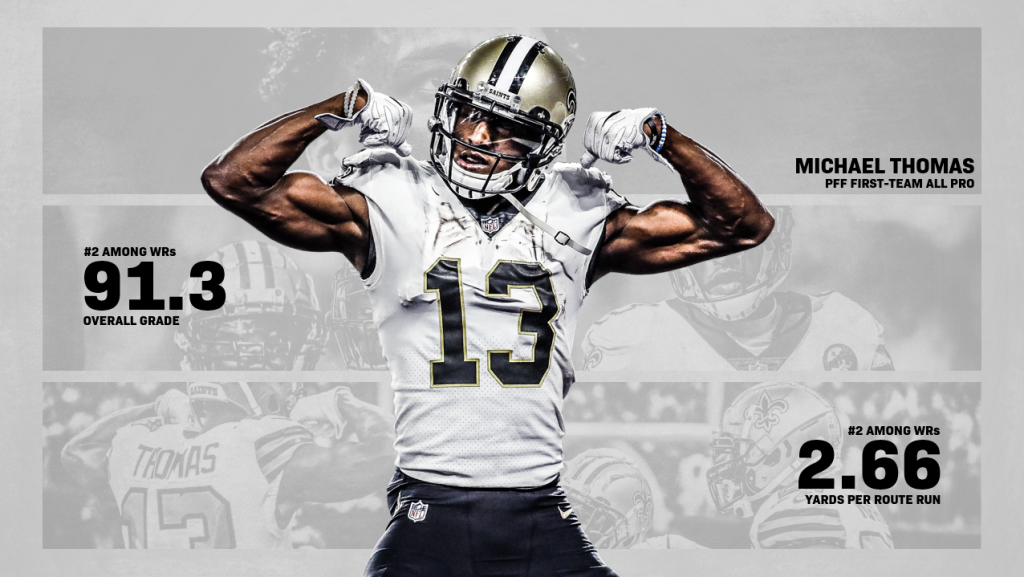 There’s truly no wrong way to order these four wide outs. Hopkins made more spectacular catches than anyone else on the list while Thomas, with a passer rating of 124.5 when targeted, was the most efficient. The most incredible stat though is this: Hopkins broke the PFF record with 115 catches this year without a single drop.

We had to find some way to get the league’s most dangerous offensive weapon onto the first team, and the flex position fits him perfectly. Hill had over 200 more deep receiving yards (754) than the next closest receiver and five more deep catches. His 3.28 yards per route from the slot was 1.28 yards better than second place.

The highest-graded pass protecting tackle in the NFL, Bakhtiari had only two games all season long where he allowed more than two pressures. For a man that pass protected on 737 snaps this season, that’s pretty incredible.

After a preseason shakeup almost saw him slotted to start at left tackle, Bitonio kicked back into to his normal spot and had a career year. He didn’t allow a sack or a hit until Week 15, and that would be the only one he allowed all season.

Kelce is still hands down the best center in the NFL and the fact that he didn’t even make the Pro Bowl is a joke. No center can execute more blocks and more consistently than the Eagles center. He also added a career-high 87.7 grade in pass protection this season for good measure.

Unfortunately for Martin, the two highest-graded guards in the NFL both play on the right side. Mason, though, is one of the most dominant road-grading run blockers in the league today. What took his game to the next level this year was allowing a career-low 16 pressures.

Schwartz would have run away with the best pass protecting lineman award if it weren’t for some late season hiccups that saw him allow nine combined pressures in Weeks 14 and 15. Before that, he hadn’t had a single game all season long allowing more than two pressures and had yielded only one sack.

Watt was back in a big way in 2018. He’s still a ways away from his peak, but 17 sacks, 12 hits and 46 pressures are still absurd figures. Mack, on the other hand, never left. No one was game planned for more on the edge this season, yet he still racked up 69 total pressures and six forced fumbles.

Donald was doing things on the interior the likes of which the game has never seen this season. 106 pressures. 21 sacks. 20 hits. Four separate games with 10-plus pressures. The numbers are absurd. No one can touch Donald’s production, but Cox was in rarified company, as well. His 95 total pressures this season were the most we’ve ever seen from a defensive tackle not named Donald. 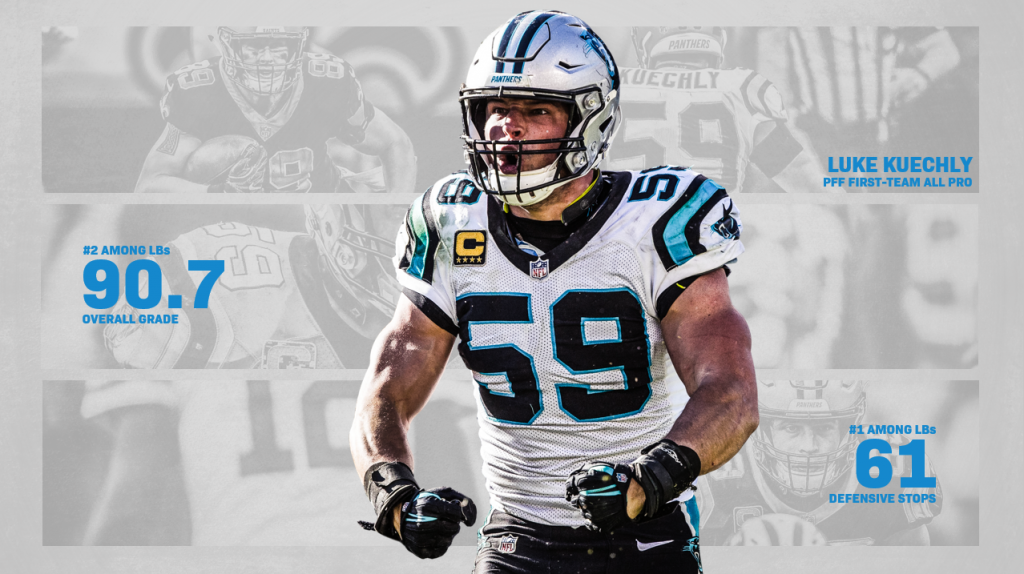 With a lone miss in Week 16, Wagner’s chance at the perfect season went down the drain. The Seahawks linebacker started the year with over 100 straight tackles without missing any, though his 137 total with only one miss is still unbelievably good. Wagner and Kuechly are in their only class at the linebacker position, as Kuechly also added another 90-plus graded season to his Hall of Fame resume. 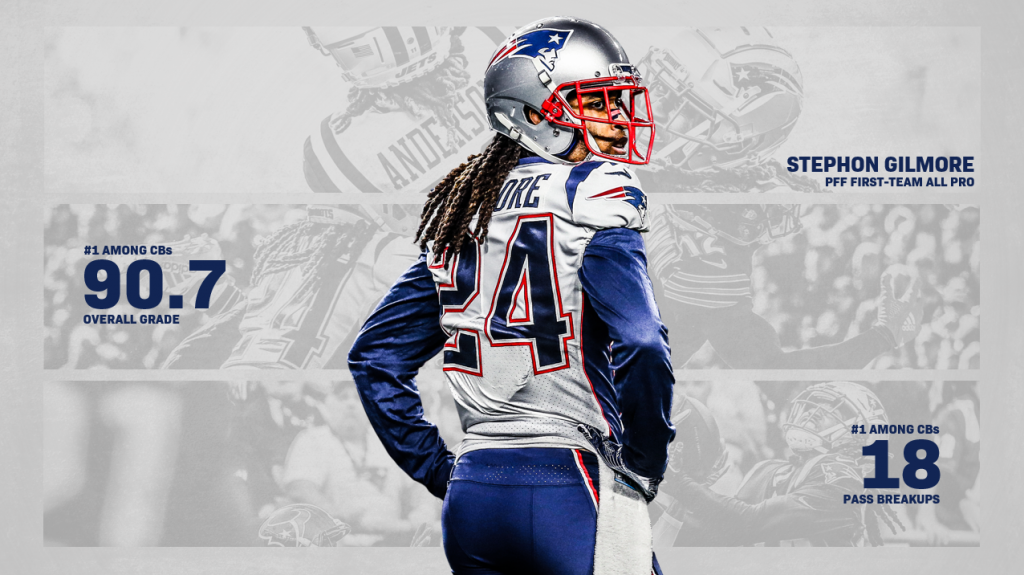 The Patriots' man-heavy scheme has suited Gilmore to a ‘T’ in his two seasons there. He led the NFL with 18 pass breakups this year and only allowed catches on 46.7 percent of his targets. Jones wasn’t too far behind with a catch rate of 53.6 allowed and 10 pass breakups, as the former safety was a revelation at corner.

The 2017 safety class flexed its muscles in Year 2. Jackson led all safeties in pass breakups (8) while Adams was tops in total defensive stops with 44 and only allowed a passer rating of 67.3 in his coverage.

Morstead vs. Hekker has been this generation’s Lebron vs. Kobe. Deciding who was better this season is nearly impossible, as their statistics are almost identical. Both punted 43 times this year with Morstead averaging 46.4 yards per attempt while Hekker averaged 46.3. Morstead netted 43.2 while Hekker 43.0, as both had only 12 returned punts all year.

McClellan was solid in coverage this season with six special teams tackles without a miss between the Ravens and Patriots this season. But it was his work as a blocker that really earned him the nod here.