Routine like the sun rising in the morning and setting in the evening, it’s a Wednesday during football season, which means it’s time to update our race for PFF’s Rookie of the Year Award. As of right now, the top-10 is currently split evenly with five offensive players and five defensive players, with this year’s No. 1 overall pick leading the way. There is still plenty of time left in this race, but here’s where the rookie’s stand six weeks into their NFL career. 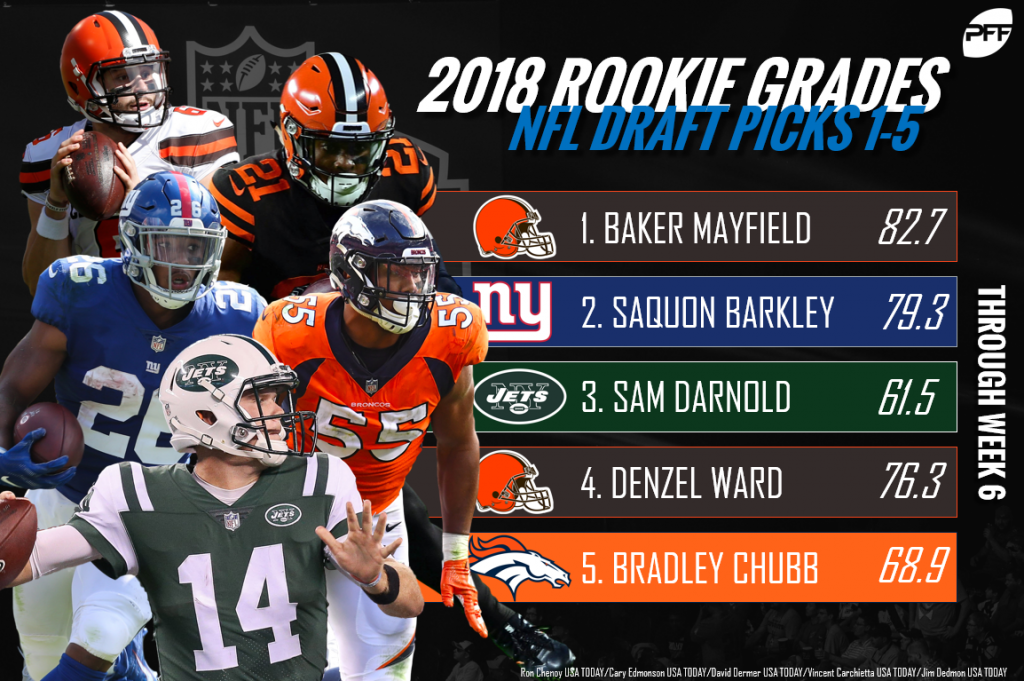 The No. 1 overall pick had his worst game of the season in Week 6 against the Los Angeles Chargers, earning a 58.9 overall game grade after scoring grades of at least 81.1 in the three other games he’s played in. It’s going to take more than just one sub-standard performance though to knock Baker off the top of this mountain, as he still ranks ninth among all quarterbacks this season in terms of overall grade. Mayfield’s overall numbers would look a whole lot better if his receivers didn’t drop so many passes – receivers have dropped 10.2% of his pass attempts, the highest rate in the league – as he’s been one of the best playmakers at the position, his 8.3 big-time throw percentage ranks third among all quarterbacks.

There have been 104 safeties this season who’ve been on the field for at least 50 defensive snaps. Among that group, James ranks sixth in terms of overall grade, and he’s the only safety to have a run-defense grade of at least 70.0 while also earning grades in both coverage and as a pass-rusher of at least 80.0. James has forced four incompletions so far this season (tied for fifth-most by any safety) and quarterbacks have just a 56.5 passer rating when targeting him in coverage. Also, his 11 total pressures as a pass-rusher are three more than any other safety.

After grading north of 80.0 in Weeks 4 and 5, Vander Esch had his lowest-graded game of the season in Week 6 at 66.2 overall. Despite the down game, the Cowboys’ first-round pick ranks third among linebackers in terms of overall grade six games into the season, and he’s the only linebacker in football to have both run-defense and coverage grades of at least 80.0. The former Boise State star has shined as a tackler so far this season. There are currently seven linebackers who have recorded at least 40 tackles for that season, all of them except for Vander Esch have missed at least four tackle attempts; he’s missed just one. 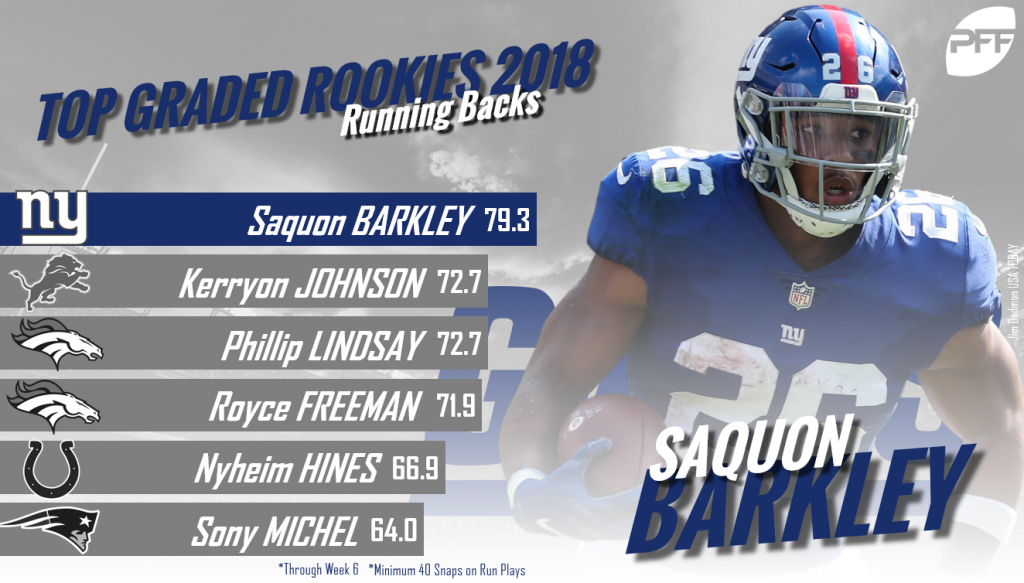 The second overall pick currently ranks fifth among running backs in terms of overall grade following a four-game stretch where he graded out at 75.8 or better in three of them. Barkley has been as good as advertised with the ball in his hands, as his 104.8 elusive rating ranks second among all running backs (elusive rating measures a runner’s impact with the ball independently of the blocking in front of him by looking at how hard he was to bring down). His 37 avoided tackles on all touches ranks second among running backs, and his average of 3.51 yards gained after contact per rush attempt ranks sixth.

There have been 88 tackles this season who’ve played at least 50 offensive snaps; McGlinchey ranks eighth among that group in terms of overall grade. The ninth overall pick has dominated as a run blocker so far as a professional His 88.4 run blocking grade leads all tackles, and he’s one of just two tackles to have a run blocking grade of 80.0 or better. He’s gotten better in pass protection as the season’s progressed, as well. From Weeks 2-4 (omitting Week 1 when he was forced to play out of position), he allowed pressure on 7.7 percent of his pass-block snaps while collecting a 51.2 pass-block grade. In two games since, he’s allowed a pressure on just 1.1 percent of his pass-block snaps while earning an 83.0 pass-block rade, the 11th-best pass-block grade earned by a tackle over the last two weeks.

Ward currently ranks 14th out of 134 cornerbacks who’ve seen at least 50 defensive snaps this season in terms of overall grade, and his 81.6 coverage grade ranks fifth. Ward has either forced an incompletion or intercepted a pass 11 times this season, the third-highest total by any cornerback, and opposing quarterbacks have just a 60.6 passer rating when targeting him in coverage, the 11th-lowest rating allowed by a corner. 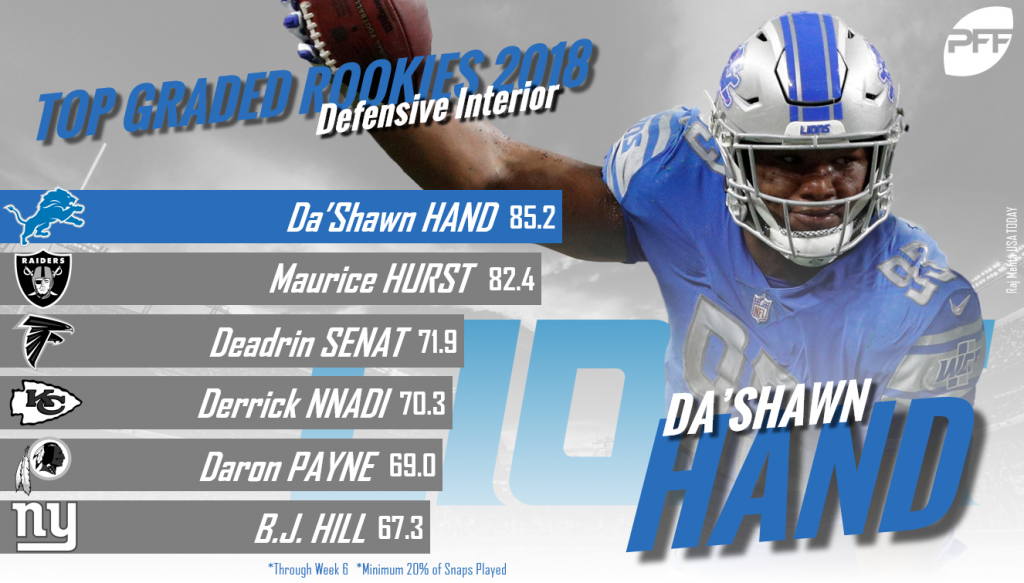 Out of the 131 interior defensive linemen who’ve seen at least 50 defensive snaps this season, Hand ranks 11th in terms of overall grade. Hand has earned a grade of at least 77.0 in four of five games so far this season. And in addition to being stout against the run (his 11 run stops are tied for eighth-most, and that’s with most other teams not having their bye week yet), he’s also made plays as a pass-rusher. His 81.2 pass-rush grade ranks fifth among defensive interiors bolstered by recording a strip sack in both Weeks 5 and 6.

Hernandez ranks fifth among guards in terms of overall grade, and he’s one of just four guards league-wide who currently own both pass-block and run-block grades of at least 70.0. Hernandez bounced back in Week 6 against the Philadelphia Eagles after struggling in Week 5 a bit against the Carolina Panthers. He’s now earned overall game grades of at least 70.0 in four of six games this season.

The only player making their debut this week, Hurst currently ranks 15th among interior defensive linemen who’ve seen at least 50 defensive snaps this season in terms of overall grade. After a slow start in Weeks 1 and 2, the former Michigan star seems to be figuring this whole NFL thing out, earning grades of at least 70.0 in each of his past four games, including an elite performance against the Cleveland Browns in Week 4 (90.5). Hurst has shown an early penchant for getting his hands up to knock down passes at the line of scrimmage, as he’s currently tied for the lead among interior defenders (with Chris Wormley and Adam Gotsis) with three batted passes this season.

Ridley currently ranks 20th out of 113 wide receivers who’ve seen at least 10 targets this season with a 77.2 receiving grade. The first-round pick has turned 74.2 percent of his targets into either a first down or touchdown this season, the second-best rate among those 113 receivers, and Falcons quarterbacks have a 147.7 passer rating when targeting him.