In this week’s update in our season-long race for PFF’s Rookie of the Year award, we are split within our top-10 with five players coming from the offensive side of the football and five coming from the defensive side. Without further ado – because who are we kidding, most of you are scrolling right past this down to the list anyways – here is this week’s update, top-10 and honorable mentions included. 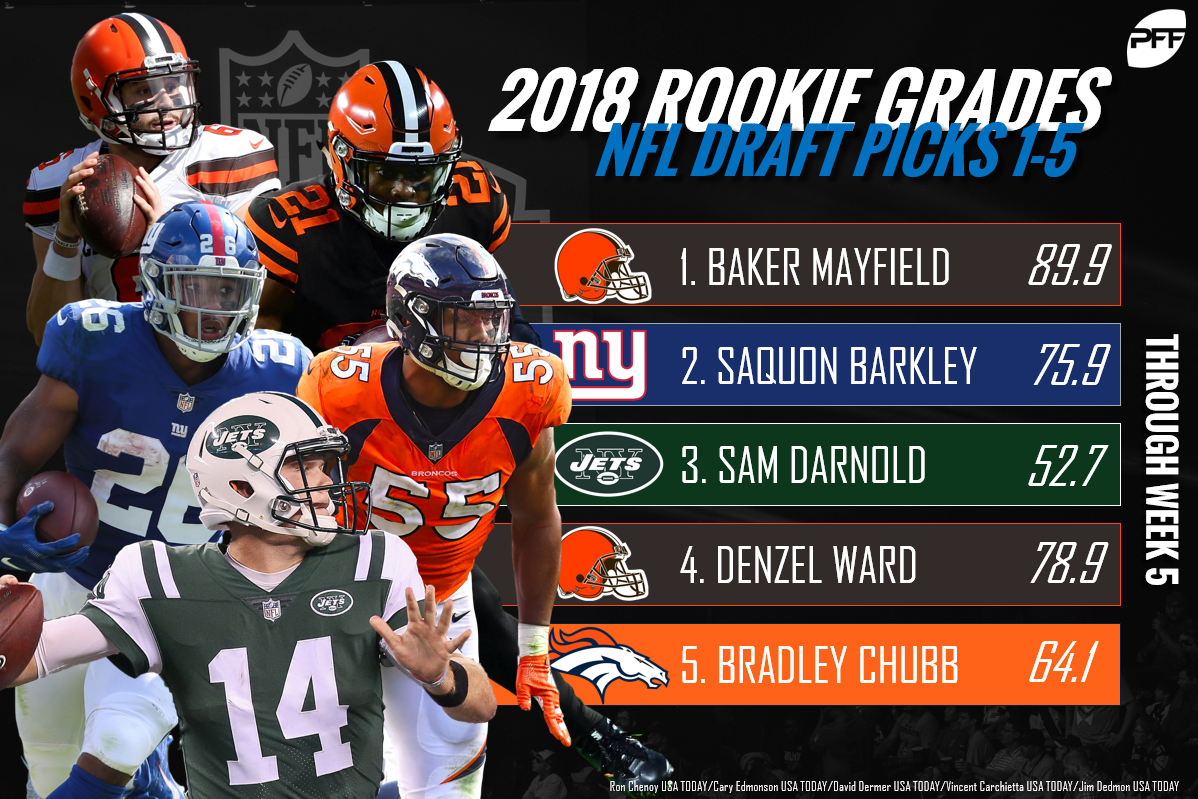 Mayfield has been outstanding since taking over as the Browns starting quarterback, posting overall game grades north of 80.0 in each of the three games he’s played. For the season, the No. 1 overall pick ranks fifth among all quarterbacks in terms of overall grade, and he’s the only signal-caller to have both passing and rushing grades above that 80.0 mark. Mayfield has been elite when it comes to throwing the ball deep, ranking second among quarterbacks with a 96.8 passing grade on throws traveling at least 20 yards in the air, and his 56.3 adjusted completion percentage on those throws ranks third.

Vander Esch continued his strong start as a professional with his best game so far in Week 5, earning an 83.5 overall grade against the Houston Texans. The Cowboys first-round pick ranks third among all linebackers this season in terms of overall grade, and he’s the only linebacker to currently own season grades of at least 80.0 in both run defense and coverage. Among the 52 linebackers who’ve made at least 10 tackles in run defense, Vander Esch ranks 10th with an average depth of tackle of just 2.38 yards. He's also one of just 13 linebackers who has recorded at least 10 tackles in run defense without missing a tackle. In coverage, Vander Esch ranks fifth among linebackers with eight coverage stops. Out of the 55 linebackers who’ve spent at least 100 snaps in coverage this season, he ranks seventh, allowing either a first down or touchdown on just 35.3 percent of the catches into his coverage. 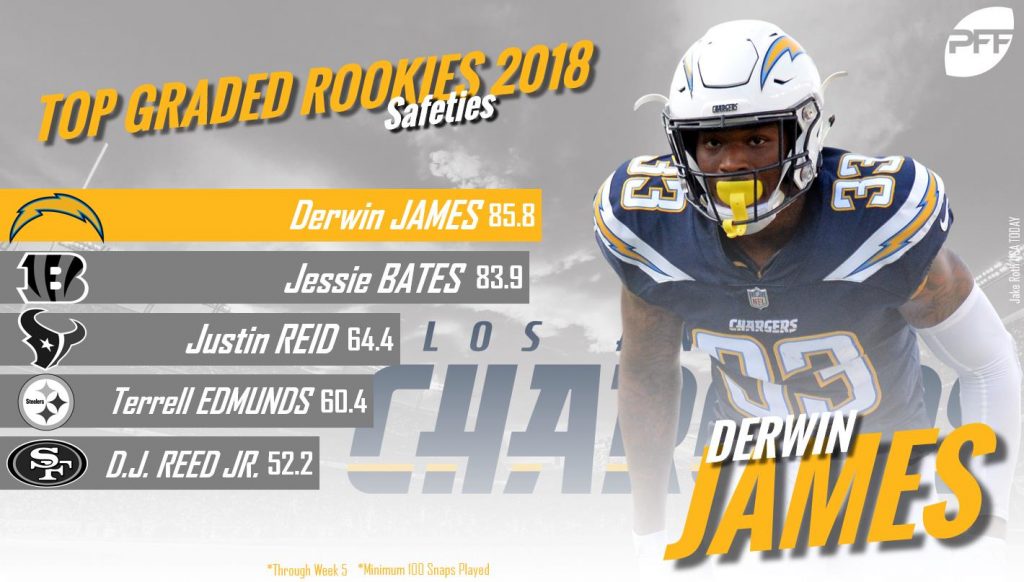 As you can see in the chart below, James has been a full-on swiss army knife for the Chargers' defense so far this season, seeing at least 38 snaps at four different positions on defense, and he’s not a dull knife, either. The Chargers first-round pick ranks sixth among all safeties in terms of overall grade, and he’s one of five safeties who currently own season grades of at least 70.0 in run defense, coverage and as a pass-rusher. James leads all safeties with eight stops in coverage this season, and his 10 total pressures as a pass-rusher are three more than any other safety has accumulated this year.

Bates dropped down into the honorable mentions last week, but he’s now firmly moved his way back into the top-10 after an elite performance against the Miami Dolphins in Week 5, in which he earned a 91.1 overall grade. For the season now, Bates ranks seventh among safeties in terms of overall grade and ninth among his positional peers with an 81.8 coverage grade. Bates ranks fifth among all safeties with 18 tackles in coverage, and he’s allowed just a 53.5 passer rating when targeted as the primary defender in coverage. 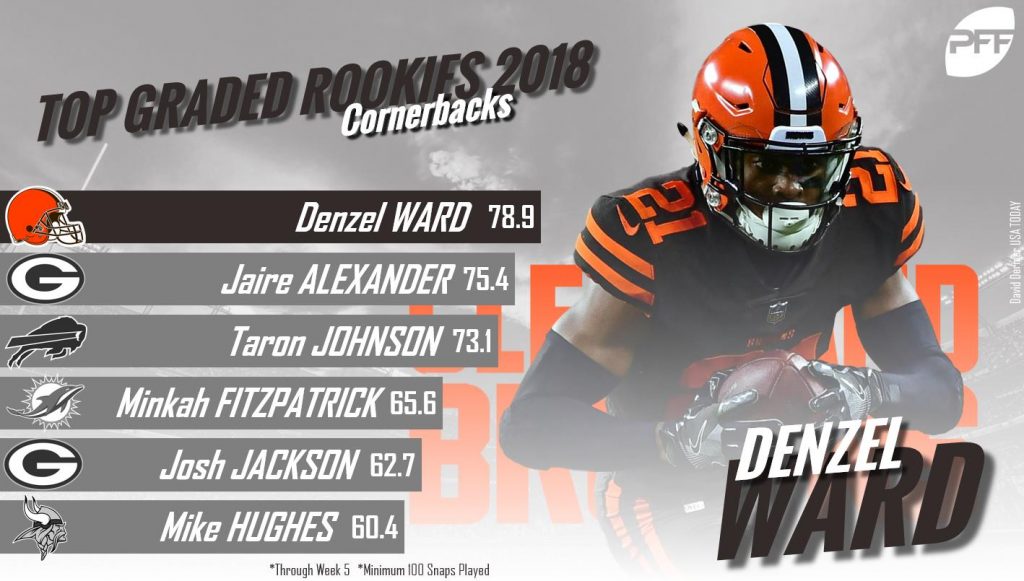 Out of the 92 cornerbacks who have spent at least 100 snaps in coverage this season, Ward ranks second with an 83.1 coverage grade. Ward is one of just four cornerbacks this season to have recorded at least six stops in coverage while also forcing at least six incompletions, and he ranks sixth among corners with opposing quarterbacks earning just a 51.5 passer rating when targeting him as the primary coverage defender. Ward has been sensational for the Browns in coverage so far and if he can clean up his tackling – his eight missed tackles are tied for the most among corners – he has a chance join his teammate at the top of this list before season’s end.

Out of the 73 tackles that have seen at least 100 offensive snaps this season, McGlinchey currently ranks ninth in terms of overall grade. McGlinchey had some initial struggles in pass protection as a pro, but he’s greatly improved in that department over the last two weeks, allowing just three total pressures over his last two games after allowing seven in the previous two (and we’ll omit Week 1 when he was forced to play out of position). Where McGlinchey has been undoubtedly great, though, is as a run blocker. The ninth overall pick leads all offensive tackles with an 86.4 run blocking grade, and he’s graded north of 75.0 as a run blocker in three of five games this season. 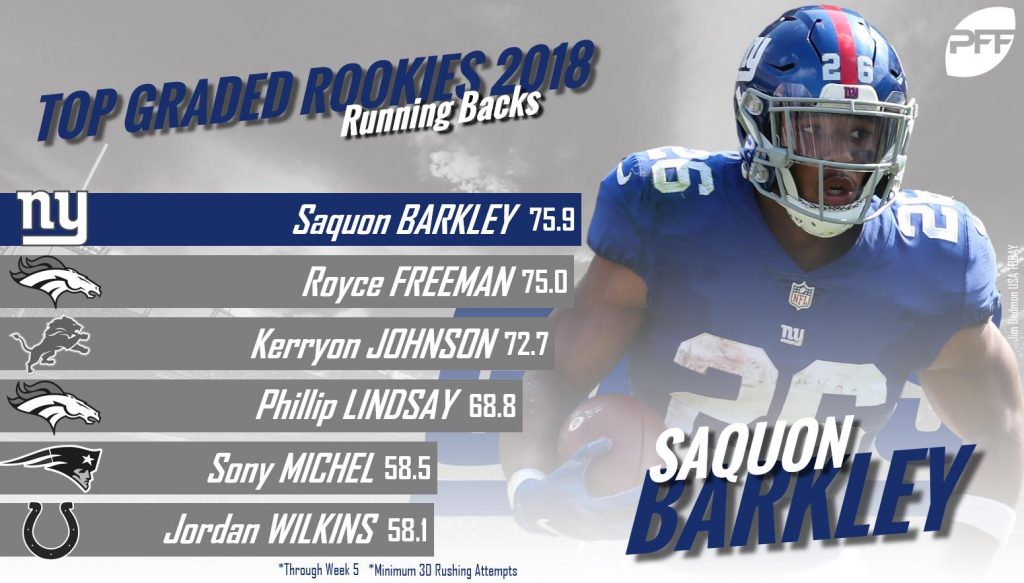 Barkley currently ranks 10th among running backs this season in terms of overall grade, and he’s getting it done as both a runner and receiver. He’s one of just two running backs (Austin Ekeler being the other) to rank within the top-15 among running backs in both running and receiving grade. Barkley had arguably the most complete game of his career so far this past week against the Carolina Panthers, earning grades of at least 70.0 as a runner, receiver and in pass protection (an area he’s struggled in so far as a pro). He's also earned overall grades of at least 75.0 in two of his last three games. The second overall pick ranks ninth among running backs this season with an 85.4 elusive rating, and his 27 forced missed tackles (combining both his carries and his receptions) rank second, trailing only James Conner.

Hand ranks 13th among all interior defenders this season in terms of overall grade, and he’s been consistently great for the Lions' defensive line, earning grades of at least 77.0 in four of five games so far. The latest draft-selection on this list ranks fifth among interior defenders with 11 stops in run defense this season, and he’s collected a strip sack in each of the last two weeks. Who would have guessed that an interior defensive lineman from the University of Alabama would be successful in the NFL?

Hernandez slides a bit down this list after a pretty forgettable performance against the Carolina Panthers this past weekend, his lowest-graded game as a pro so far at 56.6 overall. Despite the down game, Hernandez still ranks fourth among 71 guards who’ve seen at least 100 offensive snaps this season in terms of overall grade, and he’s one of just three guards who currently own both run blocking and pass blocking grades north of 70.0.

Ridley’s overall grade is weighed down a bit because he’s gotten the ball five times on handoffs so far this season with very limited success, including a fumble. As a receiver, though, he’s lived up to his first-round pedigree, ranking 24th among 106 receivers who’ve seen at least 10 targets this season with a 74.5 receiving grade. He ranks first among that group with 75 percent of his targets resulting in either a first down or touchdown, and Falcons quarterbacks have a 143.2 passer rating when targeting him so far this season.