Below is the 14th installment of our weekly PFFELO rankings. Like all ELO systems, PFFELO is an iterative system that updates each team’s rating after each game based on two things: how well they played against their opponent and how well they were expected to play against their opponent. The PFFELO rating system measures the former using our unique offensive, defensive and special teams grades, while the latter is determined by the PFFELO ratings leading up to the game and where the game is played.

A ho hum, 23-3 effort in Western New York last Sunday has the Patriots sitting at 10-2, with memories of their early-season difficulties fading quickly into the abyss. While the Bills moved the ball well against them on their first drive, the Patriots ultimately surrendered less than 300 yards for the second-straight week and no more than 17 points for the eighth-straight outing. The Patriots’ secondary, earning the league’s eighth-highest coverage grade through 13 weeks, continues to improve, with former-Bills CB Stephon Gilmore allowing just 27 yards into his coverage the last two weeks. A big test against Pittsburgh awaits New England in two weeks, a game that will likely decide home field in the AFC throughout the playoffs.

While New England’s path to the AFC’s top seed is relatively simple, the Steelers have a more middle-of-the-back road to hoe (16th in our rankings), starting this week against the Ravens. Ryan Shazier’s injury is a heartbreaking one, but signs appear encouraging for his overall health moving forward. His absence was noticeable on Monday Night – with the Bengals rushing for 130 yards on 22 carries (good for 5.9 yards per carry) despite losing their starting running back earlier in the contest. The Steelers had not given up more than 80 yards on the ground in the previous six weeks, so it will be interesting to see how they fare against a Ravens offense that has generated 240 yards rushing the previous two weeks.

The winning streak had to end at some point for the Eagles. Against the Seahawks on Sunday night, Carson Wentz was actually better when pressured (93.1 rating) than when kept clean (75.4 rating). He was under constant duress behind a left side of an offensive line that allowed two sacks, seven quarterback hits and 10 hurries to a good Seattle defense. Their lack of an ability to run the ball certainly didn’t help matters, with their backs producing only 68 yards on 20 carries (only 17 of which occurred before contact). This week’s matchup in Los Angeles will go a long way towards telling us whether the 10-1 start was due to a soft schedule (the easiest by our metrics) or signs that Philadelphia is a legitimate contender in the NFC moving forward.

While their offense only put up 14 points, the Vikings defense (third in our rating system through 13 weeks) kept the Falcons out of the end zone in an impressive road victory. Injuries to players like Sam Bradford, Dalvin Cook and Mike Remmers aside, the Vikings’ road hasn’t been an easy one, facing the league’s fourth-toughest schedule by our metrics – making their ascension even more impressive. Xavier Rhodes, fresh off limiting Julio Jones to one catch for 13 yards in his coverage, is a legitimate superstar in this league, allowing just a 58.7 passer rating into his coverage the last two seasons.

The Saints were able to rebound from a tough loss in Los Angeles to complete the season sweep of the Carolina Panthers at home Sunday. While the big numbers were still lacking for Drew Brees (269 yards on 7.9 yards per attempt), both Saints running backs averaged more than six yards per carry on the ground and combined to catch 11-of-12 targets for over 100 yards through the air. With a top-10 defense, a Hall of Fame quarterback and a top-notch running game, the Saints have as good of a chance as anyone to make it out of the NFC. They have a big test coming up on Thursday in Atlanta, however, as they try to hold off a Falcons team trailing them by two games with two head-to-head matchups remaining on the schedule.

The Rams were not as explosive as they normally are offensively against the Cardinals Sunday, with Jared Goff averaging just 7.1 yards per attempt and failing to complete a pass over 20 yards downfield. However, the defense came up big against Blaine Gabbert and Co., intercepting two passes, generating seven sacks and scoring one touchdown. Aaron Donald (97.5 PFF grade) continues to be one of the league’s premier players, while Lamarcus Joyner (90.8) is making a fantastic transition from slot cornerback to safety. Joyner had his third interception and fourth pass defensed against the Cardinals, and has allowed just a 22.7 passer rating on 22 throws into his coverage this season. The dominance of Donald, along with the versatility of Joyner and former safety Mark Barron (74.0), make for a compelling defense to watch moving forward.

The math has liked the Falcons all season, and they still rank in the top six in both our offensive and defensive rating systems through 13 weeks. One of the reasons they’re 7-5 is that they’ve played a difficult schedule (10th-most difficult through 13 weeks), but other reasons manifested themselves again on Sunday. The Falcons lost 55 yards in penalties to the Vikings, were just 1-of-10 on third down, settled for field goal attempts on all four of their trips to Minnesota territory, and inexplicably kicked a field goal down five points with about five minutes to play in the fourth quarter. The Falcons have the same record that they had a season ago at this time, and while the NFC South is stronger than in 2016, Atlanta has two dates with the Saints and one with the Panthers to set themselves up for a division title should they be worthy.

We have been somewhat bullish on the Seahawks when others haven’t this season, and were rewarded in picking them against the spread against an Eagles team at the top of their market last Sunday night. Like the Falcons above them, the Seahawks have had some disappointing moments this season. But, also like the Falcons above them, the Seahawks have an MVP-caliber quarterback in Russell Wilson and clear path towards a division title should they take control of their destiny. They go to Jacksonville this week, where their eighth-highest graded run defense squares off against a Jaguars offense that has really fallen off in opening holes for the likes of Leonard Fornette (they are 21st in run blocking grades). With the Jags unlikely to move the ball much on Seattle, the Seahawks offense against Jacksonville’s defense will be one of the most compelling matchups Sunday afternoon.

While it took them a while, the Chargers make their debut in the PFFELO top 10 this week, having won three in a row and six of their past eight games. While the Chargers have faced the league’s fourth-easiest schedule so far this season, their road to the playoffs is the fifth-easiest by our metrics, meaning the Chargers could very easily join the 1992 San Diego Chargers as the only teams to start a season 0-4 and make the playoffs. To do so, they’ll have to continue to make the decisions that have been characteristic of their victories. For example, when they target tight end Hunter Henry five or more times, they are 6-1 on the season. Henry trails only Gronk and Travis Kelce in yards per route run among tight ends through 13 weeks.

A humbling second loss to the Saints has the Panthers on the edge of this list, and facing a tough task this week against a hot Vikings team at home. The last time these two teams met (Week 3 of 2016), the Vikings pressured Cam Newton on 22 of his 45 dropbacks, and Cam responded with just a 13.1 passer rating on such throws. Cam was also poor against the blitz in that game, generating a 28.0 passer rating on said dropbacks. Things are a bit improved for Carolina up front, as their pass blocking efficiency this season (77.7) is better than a season ago (75.7). However, Newton has continued to struggle to take advantage of these clean pockets – producing the lowest adjusted completion percentage (70.6) among qualifying quarterbacks when facing no pressure this season. Against a stout Vikings secondary, look for this trend to continue. 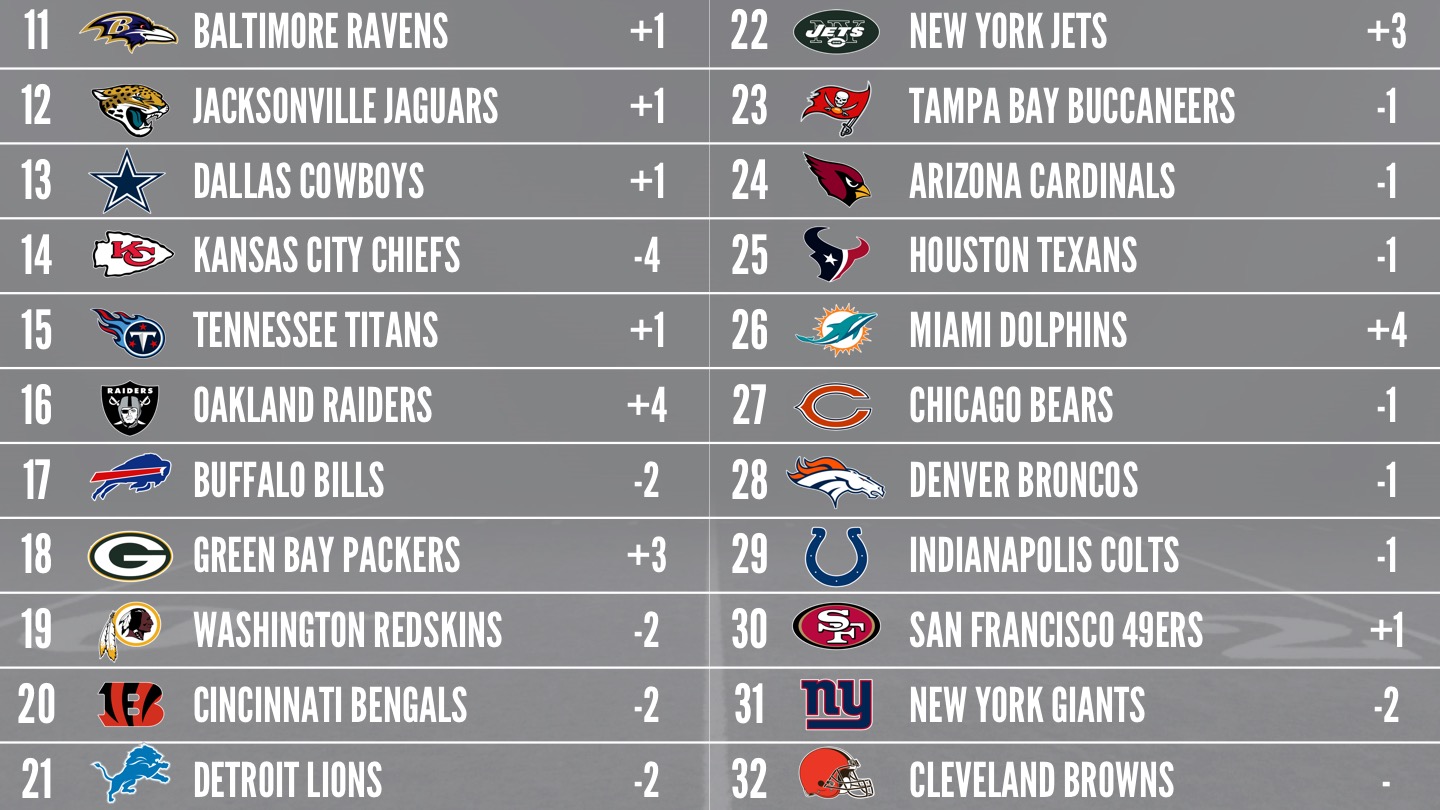