Last season saw many triumphs from rookies on both sides of the ball. Some breakout seasons were from lesser known (at the time) players drafted from rounds outside of Day 1 of the NFL draft, while being slapped with a first-round label came with heavy expectations for similar success.

Be it injury, former coaching staff, the proverbial redshirt year or adjusting to life at the NFL level, here are nine 2017 first-round draft picks that we at PFF think will have a big Year 2 in 2018.

While injuries (ankle, concussion) prevented the Browns’ No. 1 overall pick from a double-digit sack season and a running chance at Defensive Rookie of the Year, Garrett is bound for a breakout sophomore campaign if his health permits.

A freak athlete at 6-foot-5, 271 pounds, Garrett often blew by opposing offensive tackles in his debut season, flashing his explosive burst off the snap. He recorded 37 total pressures, including seven sacks, 11 hits and 13 hurries, across 290 pass-rush snaps in 2017. His 10.2 pass-rush productivity rating ranked 31st among all NFL edge defenders with 250-plus pass-rush snaps.

Garrett also proved to be no slouch in the run game, either. Though he recorded just six run stops across his 210 run-defense snaps, Garrett still proved his worth to affect the result of the play often enough to earn an 84.8 run-defense grade in 2017. 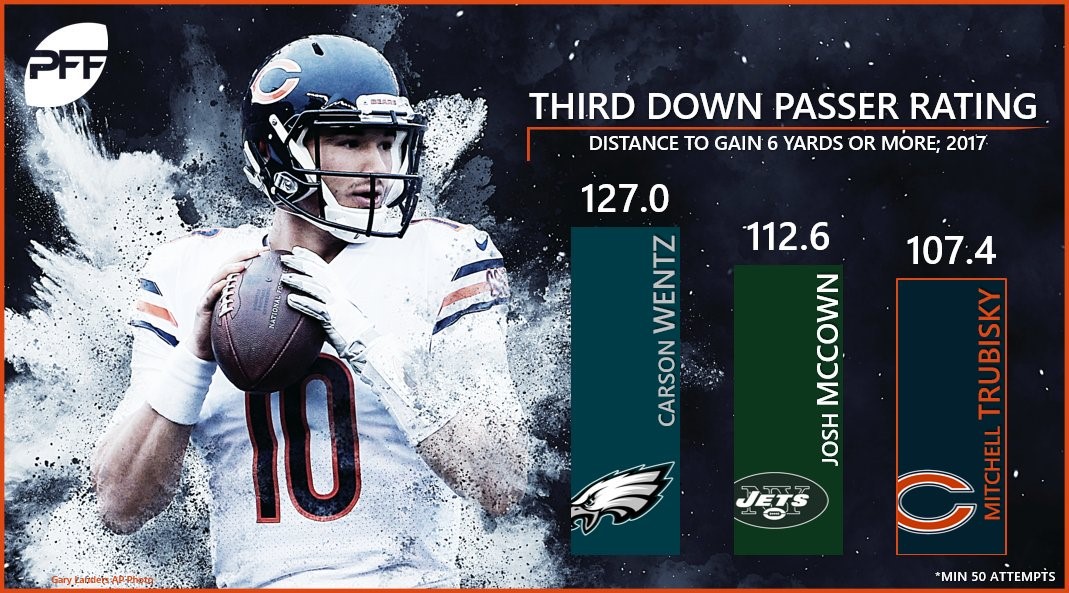 Thrown into the fire after a four-week stint of holding the clipboard behind Mike Glennon, Trubisky's leash was kept tight while under center for much of the season, but when he was hot, his show glimpses of what could be.

Trubisky earned sub-50.0 overall grades in four of his 12 starts but made up for his lows with 70.0-plus game grades in six of his starts that included a 90.0 overall game grade in Week 14. Down the stretch (Weeks 14-17), Chicago showed more faith in their young signal-caller’s arm talent and opened up the offense quite a bit, leading to three games above 73.0 down the stretch.

Though not without its low moments, Trubisky’s performance working within an aggressive, high-flying offense late in the season shed light on his potential as a quarterback capable of winning outside of a game manager role. While much is expected under the control of new head coach Matt Nagy, Trubisky still was the league's highest-graded quarterback on a per dropback basis in the first quarter last season. All signs point toward a breakout year for the former Tar Heel.

Selected as the first wideout off the board in the 2017 NFL Draft, the former Western Michigan star failed to meet expectations in Year 1 as he finished the season ranked 69th in overall grade (65.3) and 74th in yards per route run (1.13) among qualifiers at the position. If he can return to his collegiate form, however, a bounce-back year is in order.

In addition to consistent, high-end grading at Western Michigan, Davis ranked sixth in passer rating when targeted (141.9) and seventh in yards per route run (3.56) among FBS wide receivers with at least 54 targets in 2016. 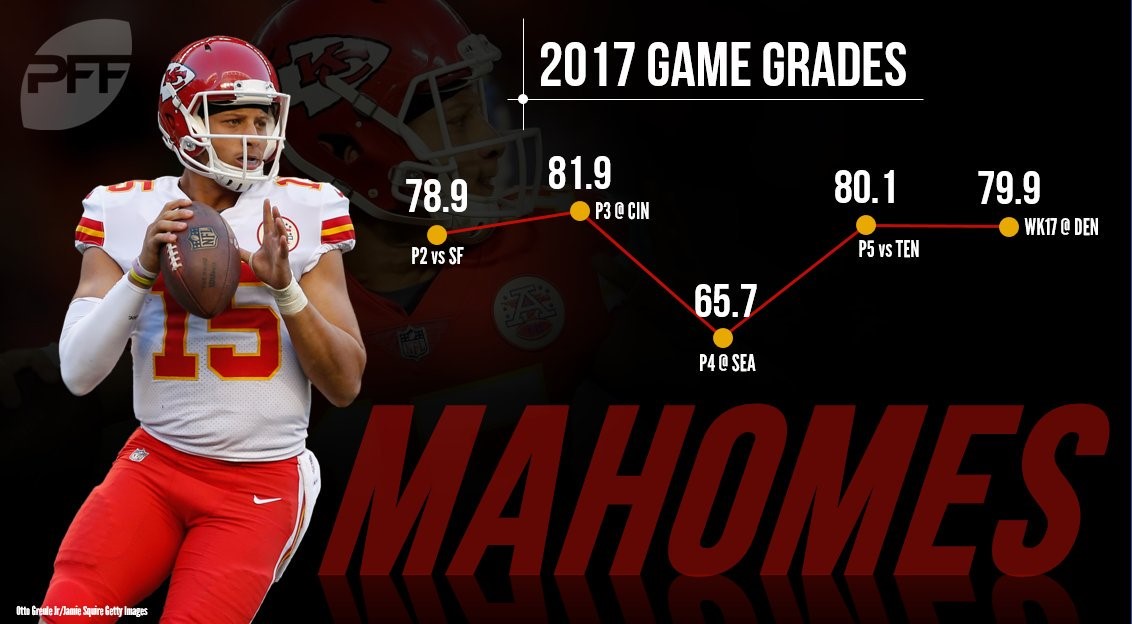 With Alex Smith now suiting up with the Washington Redskins, Kansas City will turn to their young gun in Mahomes, the team’s first-round selection (No. 10 overall) in the 2017 NFL Draft, to take the reigns under center in 2018.

The former Texas Tech star torched Big-12 defenses in his final collegiate season (2017) with the Red Raiders, finishing the year ranked fifth in adjusted completion percentage (75.4) among draft-eligible quarterbacks. He also ranked second in adjusted completion percentage (82.9) and passer rating (125.5) when working within a clean pocket, two metrics that have proved much more sustainable than others in our predictive analysis for year-to-year and college-to-pro growth.

Factor in his star-studded supporting cast (Tyreek Hill, Travis Kelce, Kareem Hunt, Sammy Watkins), and Mahomes has of the better situations of any second-year quarterback projected to start this upcoming season. 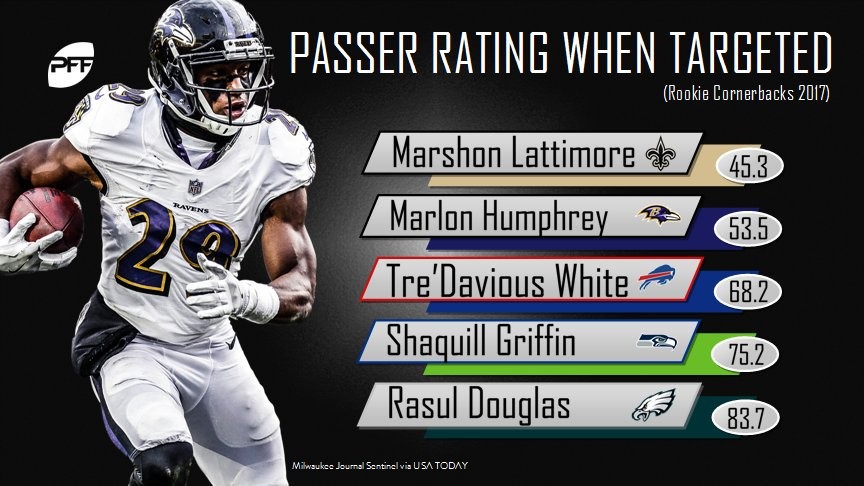 Humphrey flew under the radar to start his NFL career, as he played just 34.6 percent (208/601) of the team’s defensive snaps during Weeks 1-9 as a rotational player in the team’s secondary. The former Alabama standout earned an 81.0 overall grade in said span, leading to a so-called promotion after Baltimore’s bye in Week 10.

Playing 80.1 percent (398/492) of Baltimore’s defensive snaps in Weeks 11-17, Humphrey didn’t falter with the increased workload. He allowed a 46.7 passer rating and a 45.3 catch rate, ranking tied for 10th and 7th, respectively, among the 68 cornerbacks with at least 175 coverage snaps in said span. In Week 16, Humphrey limited wide receivers Antonio Brown and Martavis Bryant to just three receptions for six yards on nine total targets en route to an 82.7 overall game grade against the Pittsburgh Steelers.

Due in large part to his strong finish, Humphrey is expected to reclaim his starting role opposite of veteran Jimmy Smith at outside cornerback, setting the stage for a breakout year in 2018. 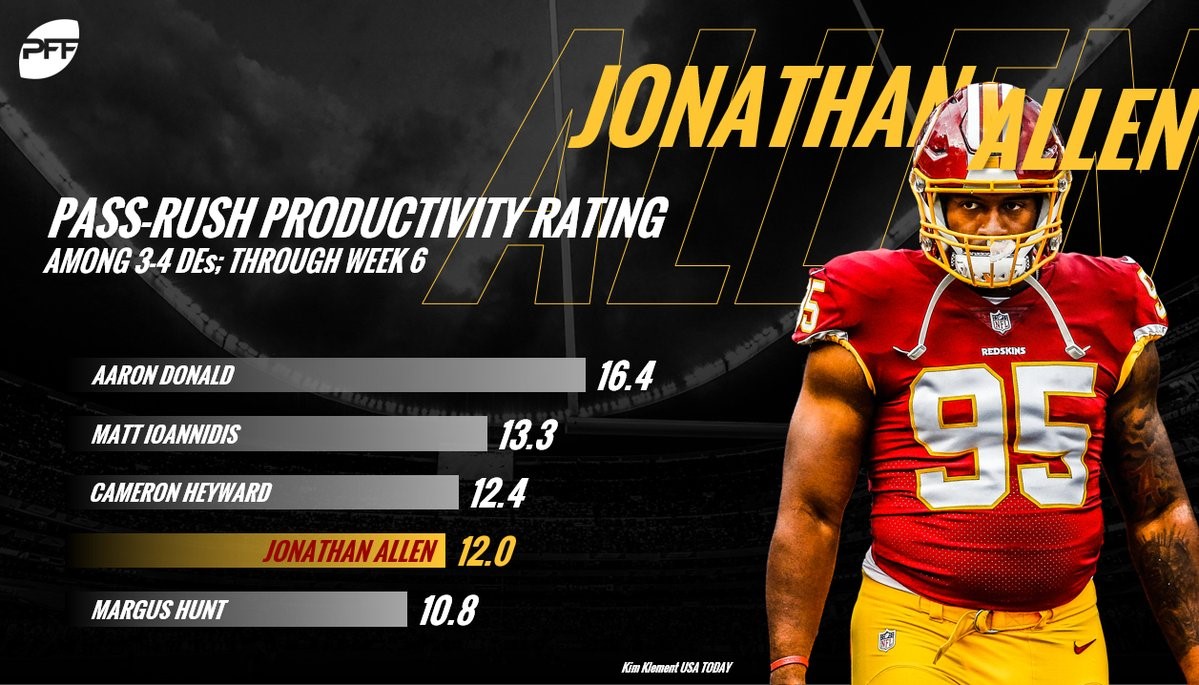 After playing at least 400 defensive snaps in his final three years at Alabama, Allen suffered a season-ending Lisfranc injury just 159 snaps into his NFL career. Adding insult to injury, Allen had been on a three-game tear of opposing offensive linemen when his misfortune struck.

In the three games prior to injury (Weeks 3, 4 & 6), Allen recorded 11 total pressures and five defensive stops, the former of which tied him for seventh among all interior defensive linemen. He also earned 79.3-plus overall grades in all three contests.

Allen has all of the tools necessary to develop into one of the better interior defenders in the NFL if he’s able to stay healthy, especially when given the opportunity to start in Washington’s talent-rich trenches with Matt Ioannidis and the league's perennially underrated pass-rusher in Ryan Kerrigan. 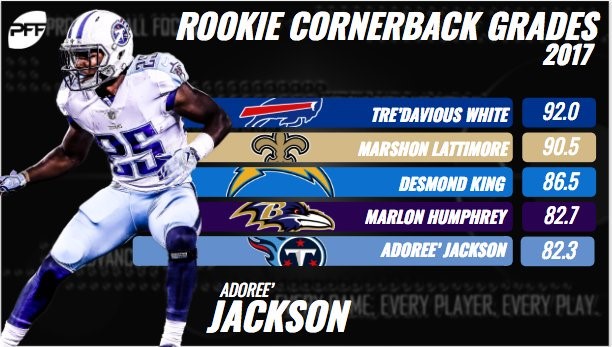 The Titans took a trial-by-fire approach with first-round cornerback’ Jackson, playing him on 94.1 percent of the team’s defensive snaps as a rookie. And though his 2017 campaign wasn’t without growing pains, Jackson showed dramatic improvements as the season pressed on and ultimately finished the year a much better cornerback than he was a USC.

Through his first 506 defensive snaps (Weeks 1-9), Jackson earned an average 71.4 overall grade, as he struggled to adjust to NFL receivers. However, he improved his overall grade by 10.9 points over his final 10 games (including two postseason appearances) to finish the season at 82.3 overall.

With another offseason under his belt and his experience from the previous year, Jackson’s upward swing should carry over to 2018.

Similar to Mahomes’ situation, Falcons edge defender Takkarist McKinley is in a great position to succeed given the team’s high-end talent in the trenches (Vic Beasley, Grady Jarrett) and his natural ability as a pass-rusher.

Though injuries prevented him from putting together a full 16-game season, Foster still wowed when healthy, as he earned an elite 90.7 overall grade across 553 defensive snaps and landed at No. 59 on our list of the top 101 players from the 2017 season. Foster specifically excelled against the run, ranking tied for fifth in run-stop percentage (11.2) and fourth in run-defense grade (90.9).

Suspended for the first two games of the 2018 season, Foster will be dearly missed at the start of the year, but for as long as he keeps injuries and off-field issues at bay, the sky’s the limit for Foster in this league.