EAST RUTHERFORD, NJ - JANUARY 03: Sam Bradford #7 of the Philadelphia Eagles throws the ball in the first half against the New York Giants during their game at MetLife Stadium on January 3, 2016 in East Rutherford, New Jersey. (Photo by Elsa/Getty Images)

Following a regression to 7-9 after 10-6 finishes in both the 2013 and 2014 seasons, the Philadelphia Eagles made coaching changes during the offseason, going from Chip Kelly to Doug Pederson. They followed that move by going all-in in the draft, trading up to take quarterback Carson Wentz at No. 2. All eyes will be on that position this season as the team looks to get back to form. There are still pieces from those 10-win teams left on the roster, but there are also some areas of concern, particularly at the offensive skill positions. 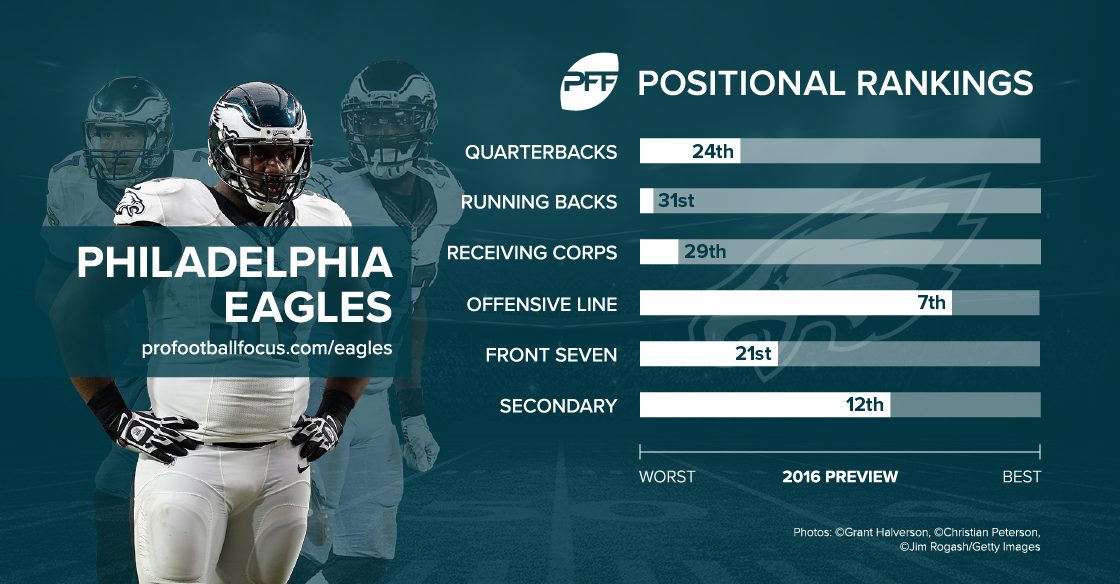 All eyes on Sam Bradford, Eagles' QB situation in 2016

The Eagles’ quarterback group is an interesting—and potentially volatile—one. The likely starter, Sam Bradford, has produced a positive passing grade in each of the last four seasons that he’s played—he finished 2015 ranked 10th in PFF passing grade while leading all quarterbacks in adjusted completion percentage under pressure (74.6 percent). But, as always, health is a question mark, given that last season was just the third time that he managed more than 1,000 snaps since entering the NFL in 2010. There’s also the added pressure of having the QB of the future waiting behind him in Carson Wentz (North Dakota State), along with Chase Daniel (Chiefs), who has the advantage of having spent the last three seasons with Pederson in Kansas City.

Despite issues in pass protection, the Eagles’ O-line finished second only to Dallas in run-blocking grade a season ago, which bodes well for the team’s lowest-ranked position group. Ryan Mathews produced a slightly-positive rushing grade in over 180 attempts the last two seasons, with solid elusive ratings both years; over that span, he forced 29 missed tackles on the ground and gained an average of 2.7 yards after contact per rush. Behind him, Darren Sproles should see plenty of snaps while splitting time on special teams (seventh-best punt-return grade in 2015), but he’s 33 years old and coming off of a career-low receiving grade with a notable decline in elusiveness. In 138 combined offensive touches last season, Sproles forced just 12 missed tackles after forcing 24 misses in 97 touches in 2014. If that downtrend continues this season, the team’s fifth-rounder, Wendell Smallwood (West Virginia), could be the beneficiary. Smallwood posted the 11th-best rushing grade among draft-eligible RBs last season.

The Eagles didn’t have a single receiver grade positively last season. Nelson Agholor, in particular had an abysmal rookie year, gaining just 283 yards and dropping four of 27 catchable passes while posting the league’s worst receiving grade. Jordan Matthews likewise had a disappointing season after a solid rookie year, while free-agent acquisition Rueben Randle (Giants) is coming off of the lowest-graded season of his career. At present, this is a unit that has plenty of high-round draft picks and potential, but doesn’t yet have the production to match it.

The team’s tight end group looks stronger in that regard, with both Brent Celek and Zach Ertz grading among the 20 best at the position in 2015.

Most notable are the interior upgrades that the Eagles acquired in free agency. Brandon Brooks (Texans) brings four straight seasons of positive grades in pass protection, and at his best, is one of the league’s better run blockers. Stefen Wisniewski (Jaguars), whether he ends up with a starting job or not, also brings strong career grades in the passing game, where the Eagles’ line struggled the most last season. At tackle, the team is set with Jason Peters and Lane Johnson. Peters is coming off of a slight down year by his standards, but at his best, is one of the league’s best LTs, having graded positively in both facets every season that PFF has charted (since 2007). On the other side, Johnson recorded the league's ninth-best pass-blocking efficiency rating in 2015, while his overall grades have been solid over the last two years.

The defensive line is a definite strength for the Eagles; they’ve gotten solid production inside with Bennie Logan and Fletcher Cox—the two combined for 89 defensive stops last season, ranking fourth and fifth among interior defenders. On the edge, Brandon Graham finally saw starter-level playing time last season and maintained the high level of production that we’ve seen throughout his career, while Connor Barwin and Vinny Curry graded well above average as pass-rushers.

What brings the unit’s ranking down is depth and the linebackers. There’s not much behind the aforementioned five defensive lineman, given that both Beau Allen and Taylor Hart graded negatively overall last season. And at linebacker, Jordan Hicks enjoyed a solid rookie year, but their two other projected starters, Nigel Bradham and Michael Kendricks, struggled. Bradham had his lowest-graded season by far in 2015, producing below-average results in every facet, while Kendricks ranked last at the position in coverage, despite an impressive 2014 mark there.

Malcolm Jenkins headlines one of the Eagles’ better units, entering his third season in Philadelphia after grading as one of the top safeties in the NFL last year. The team added Rodney McLeod (Rams) and Leodis McKelvin (Bills) after the departures of Walter Thurmond (retired) and Byron Maxwell (Dolphins). McLeod has two seasons of positive coverage grades under his belt, and was PFF’s 10th-graded safety overall in 2015, while McKelvin allowed a completion on just 47.2 percent of targets, the second-best mark among corners. Both acquisitions are likely better scheme fits under DC Jim Schwartz than the players they are replacing. The team’s other projected starter at outside corner, Nolan Carroll, has been somewhat inconsistent over his career, but at worst should still be close to average.