Confidence is building in Oakland after an impressive offseason. Holes are hard to find on what appears a complete and balanced roster. Derek Carr’s dramatic rise has boosted belief significantly. Winning is a habit, though, and an elusive one in the Raiders’ case. Can 2016 be the season they challenge for an AFC West crown — if not more? 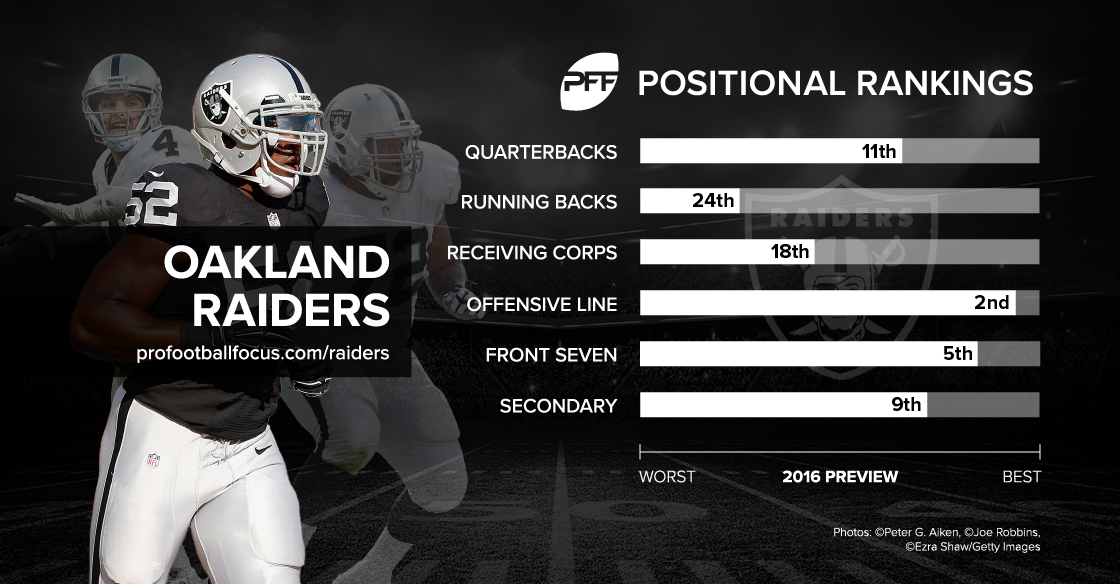 Last season, the Raiders’ projected 2016 starters on the offensive line averaged a grade of 84.0 (not including Menelik Watson, who missed all of last season due to injury). The elite Dallas O-line? 84.0, as well. At center, Oakland's Rodney Hudson allowed only eight total pressures a season ago, fewer than any other NFL center.

2. Slot options a concern on both offense and defense

While the Raiders’ starting roster looks strong, they do lack depth at a couple of key positions. Amari Cooper and Michael Crabtree have the starting receiver spots locked down, but the slot position remains an issue. Currently occupying the role, 2014 undrafted free agent Seth Roberts has had an indifferent start to his NFL career. He managed only 32 catches from 51 targets for 480 yards, five touchdowns, and six drops last season. On the other side of the ball, T.J. Carrie also struggled in 2015. Working against slot receivers predominantly, he allowed 44 catches from 71 targets for 547 yards, one touchdown, one pick, and five pass deflections. Managing only a 50.0 overall grade, Carrie ranked 81st among corners. Although their starters appear strong, a lack of role players could prove costly.

Surrounded by rookies and second-year pros, Dan Williams remains the constant. The stud nose tackle is constantly entrenched in his position against the run, refusing all attempts to shift him. Williams’ experience must be reassuring, but it’s meaningless without talent. Thankfully, a shortage of talent is of little concern. Overall, he ranked 15th among interior defenders last season, with an 85.5 run-defense grade. Only four defensive tackles bettered his run-stop percentage of 12.1. He missed no tackles while managing 31 stops, clogging inside running lanes for fun.

While Aldon Smith sits on the sidelines, Calhoun has a better chance to see the field regularly. Bruce Irvin will likely get the majority of snaps, but Calhoun can thrive as a specialist pass-rusher. Although not particularly effective setting the edge for the Spartans last year — a deficiency also evident this preseason — the Raiders’ second-round pick is a dynamic pass-rusher. He’s managed six combined pressures in the three exhibition games so far, tying for Oakland’s team lead. Calhoun outperformed all but one FBS edge defender last season, generating 75 combined pressures.

A candidate for defensive MVP in 2015, Khalil Mack has reached elite status. He was the league’s best edge rusher (considering only the regular season) in 2015, managing a 92.0 pass-rush grade and generating 82 combined pressures on the year. In addition, the Raiders’ All-Pro recorded a league-leading 54 defensive stops. In every facet of play, on every down, Mack finds a way to make an impact. Should Oakland make the playoffs, he has the ability to change games in the Raiders' favor.

It feels like focusing on Cooper’s drops would be a mistake, considering the number of big plays he also managed. That’s not to excuse the sloppiness in his game, but rather to suggest that the positives are likely to supersede the negatives sooner rather than later. Cooper totaled 10 catches for 356 yards and four touchdowns a season ago. He’s not predictable, either, doing his fair share of damage underneath, as well. The 14 tackles he broke in 2015 tied for 10th in the league. Building on a solid rookie year shouldn’t be an issue for the ultra-talented Cooper.