ATLANTA, GA - AUGUST 11: Julio Jones #11 of the Atlanta Falcons runs on the field during player introductions prior to facing the Washington Redskins at Georgia Dome on August 11, 2016 in Atlanta, Georgia. (Photo by Kevin C. Cox/Getty Images)

After winning six of their first seven games last season, the Atlanta Falcons' saw their 2015 campaign take an ugly turn in Week 8, as the team would go on to win just twice more. With a major O-line addition and pass-rush help added via free agency, can the Falcons get off to another hot start in 2016—and maintain the high? 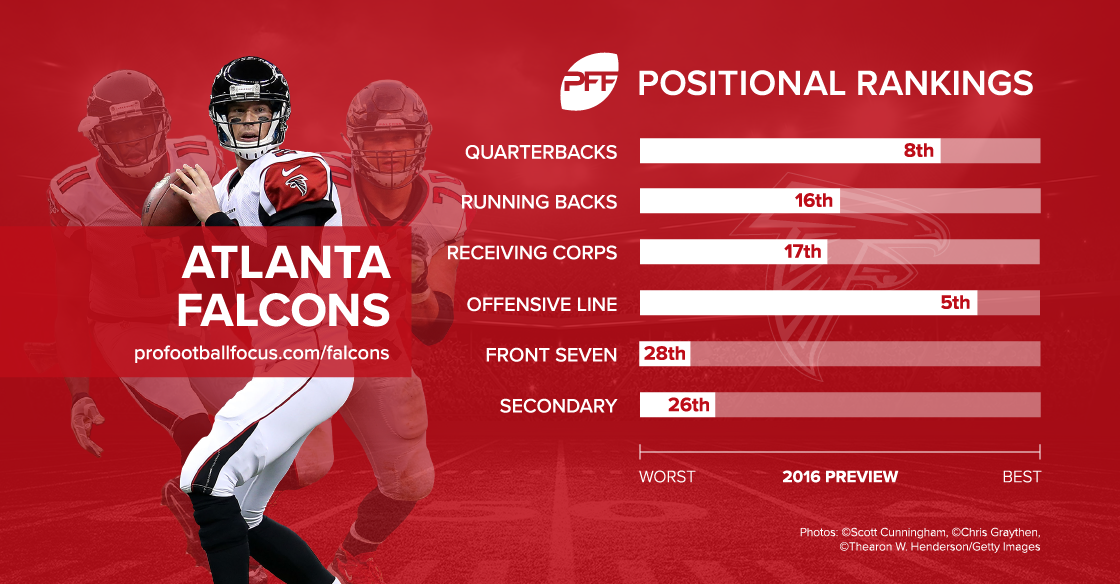 1. The offense should only get better with the addition of C Alex Mack.

Former Cleveland Browns center Alex Mack played just 300 snaps in 2014 before injury cut his season short, and with career lows set in total pressures allowed and run-blocking grade in 2015, it was clear he wasn’t yet fully recovered. Now almost two full years removed from his broken fibula, he should be back to his old ways, which means finishing in the top 10 at his position in terms of overall grade. The Falcons have not had a center finish in PFF's top 10 since Todd McClure in 2011. In 2013, Joe Hawley finished 21st, James Stone was 33rd in 2014, and last year, Mike Person finished 27th in overall center grades—thus, it’s easy to see how big of an upgrade the addition of Mack is expected to be. Also, with the addition of WR Mohamed Sanu to replace the clearly declining play of Roddy White, it’s easy to have higher expectations for this year’s offense.

2. Three rookies are likely to start on defense.

The defense took a small step forward last year, ranking 18th in our overall defense grading after finishing 27th in each of the two prior seasons. This being said, the back seven was especially in need of a talent upgrade, and the Falcons are certainly attempting to do just that with an infusion of youth. The base defense has undergone wholesale changes at linebacker, with second-year player Vic Beasley moving to strong-side outside linebacker and two rookies, second-round pick Deion Jones of LSU and fourth-round pick De’Vondre Campbell of Minnesota, taking the other two spots. Add in first-round pick Keanu Neal out of Florida, slotted to start at strong-side safety, and the youth movement is clear. This being said, Neal and Jones were two of our least-favorite picks in this past draft, and we expect there to be significant growing pains as a result this season, meaning the defense could actually take a step backward in 2016.

3. The lack of depth at CB could be Atlanta's undoing.

2015 second-round pick Jalen Collins was supposed to be the starting CB opposite Desmond Trufant by this point. However, he was suspended in April for the first four games of the 2016 season due to PED violations, and the Falcons did little else to bolster the depth of the position. Robert Alford, who is better suited to play in the slot, is currently slated to retain starting duties outside, while Akeem King (2015 seventh-round pick) and Brian Poole (2016 undrafted free agent out of Florida) have taken the most preseason snaps outside of the main three CBs. Alford elevated his play down the stretch last season (he graded out below-average in coverage just once over the final eight games of 2015), but if he cannot continue that trend, or if any of the top three CBs were to suffer an injury, the Falcons are dangerously thin at the position.

Neal was PFF's 78th-ranked college safety last year, as he earned negative grades against the run and in coverage. He missed Atlanta’s first preseason game with an injury, but started the Falcons’ second preseason game against the Browns. While this is certainly a sign of the high expectations Atlanta has for him, he gave up a 29-yard touchdown pass to Browns TE Gary Barnidge in the second quarter, the only time he was targeted during his seven coverage snaps. He also graded negatively against the run, due to his inability to defeat blocks. Unfortunately, Neal injured his knee while missing a tackle in the third preseason game. While the knee required surgery, he is only expected to miss about a month of action.

Jones had an outstanding year in 2015, topped grade-wise only by Pittsburgh’s Antonio Brown. He was targeted a PFF-era record 193 times, catching 136 passes for 1,871 yards and eight scores. His yardage tally is the second-highest all-time behind Calvin Johnson’s 1,964 in 2012. If he sees a similar target volume this season—and despite the addition of former Bengals WR Mohamed Sanu, there’s little to suggest he won’t—Jones is certainly capable of challenging Johnson’s record. His combination of size, strength, and speed make him a matchup defensive coordinators simply don’t have an answer for, proving Jones to be one of the very best in the game in an era loaded with talent at his position.

It can be argued that Shelby had his breakout season last year in Miami, when he racked up 45 total pressures and 30 defensive stops, both career marks by a wide margin, but the next step for him is to prove he can produce over the course of a full season, as he did the final eight games of 2015. During that stretch, he tallied all four of his sacks on the season, three hits (half of his season total of six) and 22 of his 35 other pressures on the year, as well as 20 stops. All of those production numbers during the last half of the season would have been career marks by themselves for Shelby prior to 2015. Now in Atlanta, he is going to be relied upon to provide pass-rush support to Vic Beasley, as this is still an area of serious concern on the defense.