Over the second half of the season, Russell Wilson‘s case for MVP lost its luster because he couldn’t maintain his stellar play under pressure. It appears that the postseason has brought some of that magic back for Wilson and the Seattle Seahawks’ offense in their rematch against the Philadelphia Eagles. Wilson was under pressure on nearly half of his 36 dropbacks, and on those plays, the Seahawks averaged eight yards per play. For context, the Dallas Cowboys led the NFL with 5.8 yards per pressured dropback in the regular season. A big part of that was Wilson only taking one sack, five fewer than in his first meeting with Philadelphia. Instead, he broke off several key scrambles including an impressive 18-yard gain on third and long. With the current state of the Seattle offensive line, Wilson is going to have to keep pulling rabbits out of his head under duress for the Seahawks to advance. 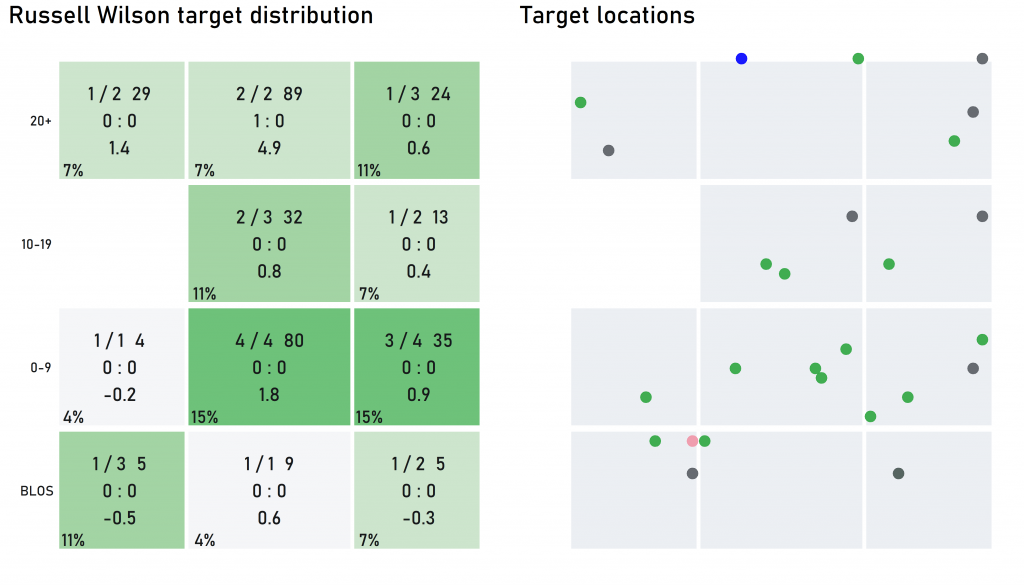 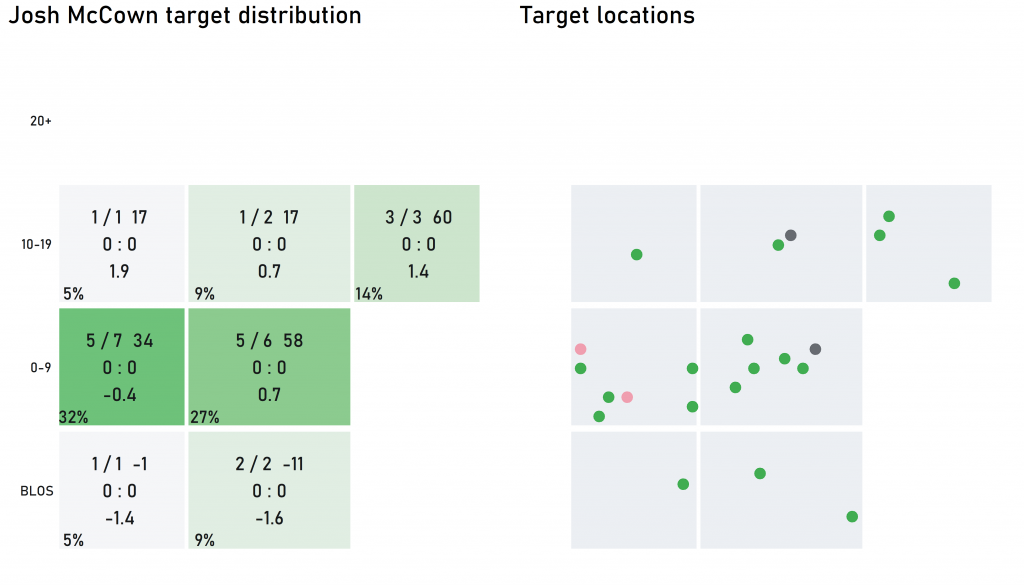 Wilson’s counterpart, Josh McCown, wasn’t nearly as effective as Wilson evading the pass rush in relief of an injured Carson Wentz. McCown took six sacks in the game, and that came against one of the worst teams in the entire league at generating pressure entering the postseason. The Seahawks’ pressure rate of 30% in the regular season was higher than only the Miami Dolphins. Injuries along the Eagles’ offensive line certainly helped, but if the Seahawks can get after Aaron Rodgers like that next week, it would go a long way to securing an NFC Championship bid.

D.K. Metcalf continued the year of the rookie wide receiver, bringing in seven of nine targets for 160 yards and a touchdown. Metcalf’s ability to win downfield was never in doubt coming into the NFL thanks to his freakish combination of size and speed, and he torched the Eagles’ secondary with three catches 20 or more yards downfield. Those three catches included both his touchdown and the game-sealing third-down reception against a Cover-0 look late in the fourth quarter. Rookie wide receivers are playing a big role for several of the teams still alive in the playoffs, and Metcalf is at the forefront of that conversation.

In a game where Travis Homer and Marshawn Lynch combined for just 19 rushing yards on 17 carries, Wilson needed to shoulder the offensive load for the Seahawks to have any shot. He did just that with 45 rushing yards of his own and 10.8 yards per pass attempt. Even with that effort from Wilson, an Eagles team that continued to pile up injuries at an alarming rate had opportunities late to win the game. It just goes to show that the margin for error from Wilson is slim, and he’ll need to be on top of his game once again next week for the Seahawks to win in Lambeau.