One of the keys to the Jacksonville Jaguars' success defensively this season has been their ability to generate pressure from their defensive line. Interior defender Malik Jackson was dominant in the win over the Seattle Seahawks, racking up a sack, a hit and three hurries, giving him a pass-rushing productivity rating of 14.3 in the game, which is currently the highest mark by an interior defender this week. 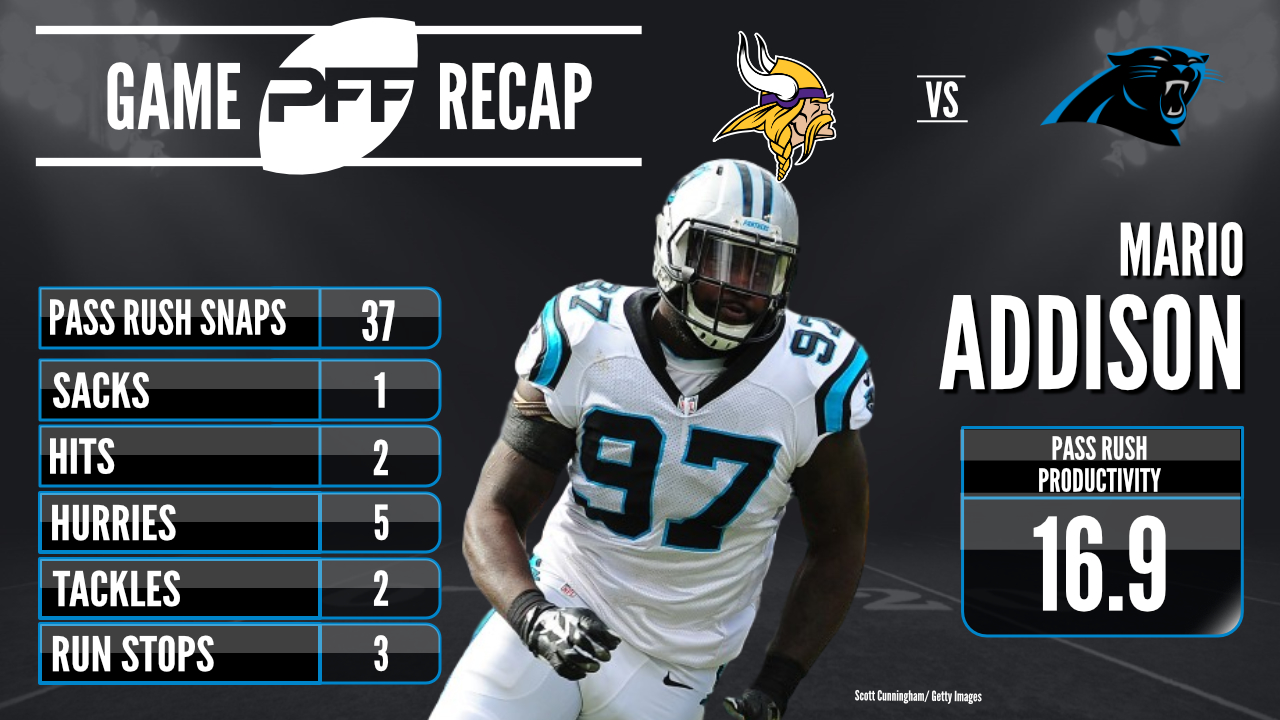 The Carolina Panthers survived a late rally by the Minnesota Vikings to pick up another key win in the race for the NFC South crown, and edge defender Mario Addison was key to that. From 37 pass-rushing snaps he produced a sack, two hits and five hurries, good for a 16.9 pass-rushing productivity rating. 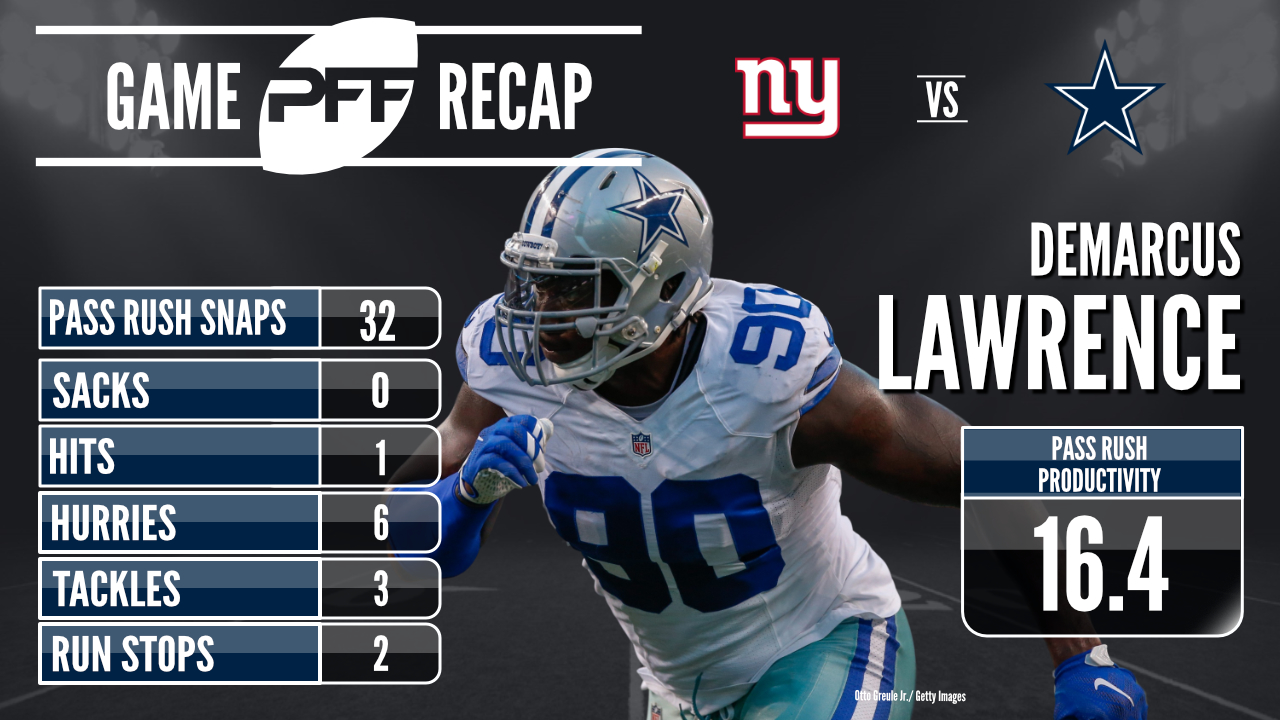 It has been a season to forget for the Dallas Cowboys, but edge defender DeMarcus Lawrence has had a career year. Like Addison, he produced a 16.9 pass-rushing productivity rating this week, with seven total pressures from 31 pass-rushing snaps.

Tramon Williams of the Arizona Cardinals didn’t get much attention in the offseason, but he has delivered some big time performances for Arizona this season. In the win over the Tennessee Titans, he allowed an NFL passer rating of just 6.3 on throws into his coverage, allowing just three receptions for 23 yards and came away with an interception. 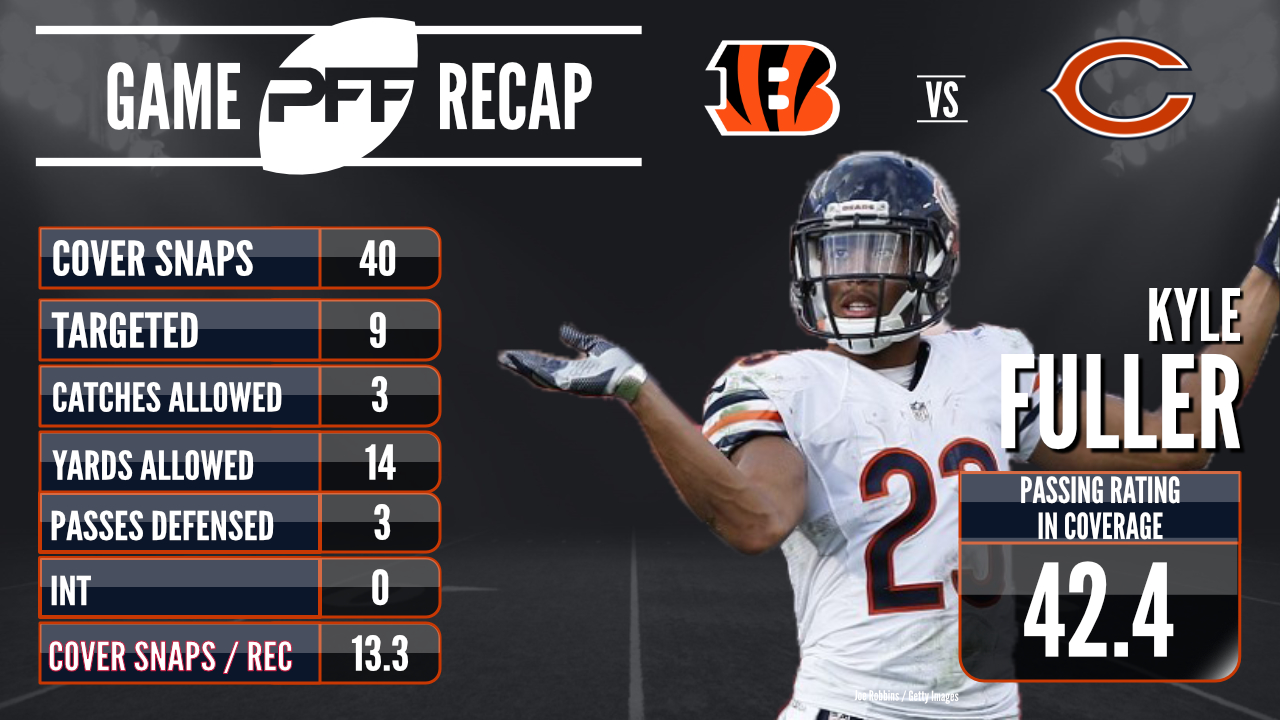 Tested nine times in coverage in the win over the Cincinnati Bengals, Chicago Bears cornerback Kyle Fuller allowed just 14 yards on three receptions through the air. Coming on 40 snaps in coverage, that gave him a yards allowed per coverage snap average of just 0.35 on the day.

The Carolina Panthers targeted the Minnesota Vikings talented cornerback Xavier Rhodes on five of his 27 snaps in coverage but didn’t find much success when they did. Over the course of the game, Rhodes allowed just two receptions for 28 yards, and an NFL passer rating of just 58.3.

The second member of the Jaguars defense to find himself on our Sunday Standouts list, cornerback A.J. Bouye produced an eye-popping stat line in the win over the Seattle Seahawks. Targeted seven times in coverage, he allowed just two receptions for eight yards, and came away with two interceptions, all of which adding up to an NFL passer rating allowed of 0.0.

Green Bay Packers rookie safety Josh Jones delivered a big performance on Sunday. He saw three passes where he was the defender in primary coverage, giving up just one reception for five yards. He also finished the game with two pass breakups and an interception.

It’s Monday, which means it’s time for us to tell you why Los Angeles Rams interior defender Aaron Donald was awesome this week. As a pass-rusher, he produced two hits and five hurries, giving him a 10.1 pass-rushing productivity rating on 52 pass-rushing snaps.

Houston Texans edge defender Jadeveon Clowney might not have registered a sack on Sunday, but that doesn’t mean he wasn’t dominant. Racking up four quarterback hits and five hurries from 30 pass-rushing snaps, his 22.5 pass-rushing productivity rating is currently the best of any edge defender this week.