Projecting the race for the No. 1 overall pick in the 2020 NFL Draft

This time of year, we’re looking at probabilities that positive outcomes happen for teams. What are the chances the Tennessee Titans win the AFC South? The New Orleans Saints win the NFC? The Baltimore Ravens win the Super Bowl?

In the same vein, we're also looking at which teams are bound to find themselves at the top of the draft order. While the path to that destination is not a good one — the product of a truly terrible season — the No. 1 overall draft pick is an opportunity to change the course of a franchise. Last season, the Arizona Cardinals averaged 0.4 yards per play fewer than any other team in the NFL. With the addition of Kyler Murray at the top of the draft (and Kliff Kingsbury), the Cardinals have since upped that average by 1.1 yards per play to rank 18th among the league's 32 teams. Recent turnarounds through the No. 1 overall pick are evident elsewhere, too — Baker Mayfield and Jared Goff have had their ups and downs, but each has played a role in the increasing fortunes of their respective franchises.

Using the machine-learning capabilities afforded to us by AWS, we simulated the rest of the season thousands of times to determine the likelihood that each team gets the No. 1 pick. With Joe Burrow — the best college quarterback in the PFF era and recent Heisman Trophy winner — slated to be off the board first, let’s take a look at the likeliest team to draft him: 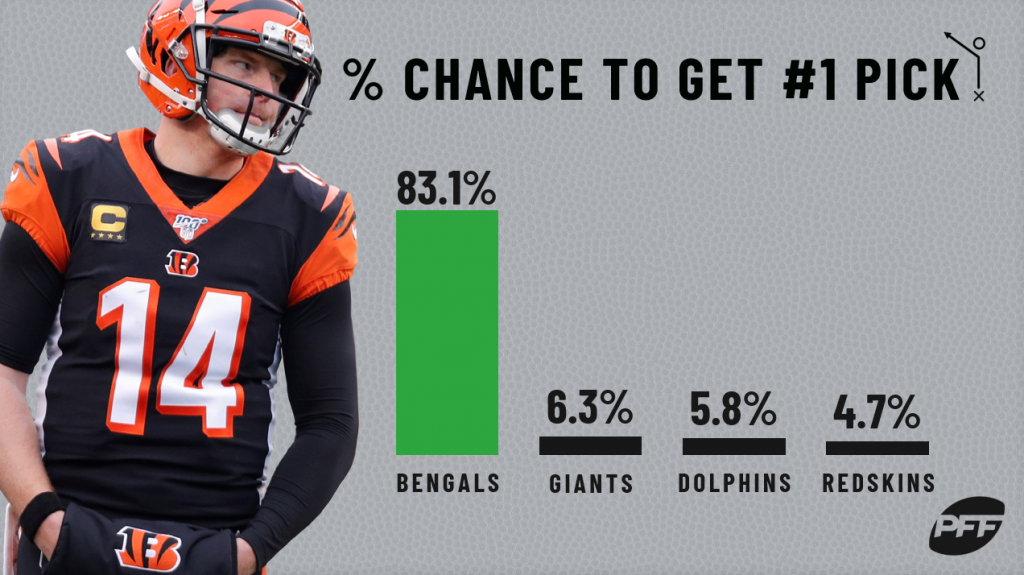 The Bengals hung with the New England Patriots for the first half last week at home, but they ultimately gave way in a double-digit loss to the defending champs. That’s probably a good thing for Zac Taylor’s bunch, as it puts them in prime position for Joe Burrow, who excelled in limiting negatively graded throws during his final year at LSU. Burrow’s ability to create positive plays makes him far and away college football’s most-valuable player — worth over half a win more than the runner up, Ohio State’s Justin Fields.

While the Bengals need some prior first-round picks to stay healthy and perform up front, they already have talent at the skill positions in Tyler Boyd, John Ross, Auden Tate and Joe Mixon (even if A.J. Green does not return). The fastest way to turn around a franchise is to draft a quarterback with a similar level of potential as Burrow and build around him. The Bengals are not in an egregious position to do so in 2020.

The Dallas Cowboys and Philadelphia Eagles aren’t the only teams benefiting from the NFC (L)East, as the Giants would earn the tiebreaker over the Bengals due to strength of schedule (should they tie for the worst record in the league). If they manage to finish in the top spot and Dave Gettleman is still the general manager, it will be interesting to see if they jettison Daniel Jones in favor of Joe Burrow, draft Chase Young to replace the edge players they’ve recently lost in Olivier Vernon and Jason Pierre-Paul, or trade back (something Gettleman is not a fan of doing).

Young is the best defensive end we’ve seen since PFF began grading college in 2014 and would help immediately and immensely. The Giants are in need of more than one player, though — especially defensively. So if another team in desperate need of an edge defender blew their doors off with a trade offer, would the Giants do what they didn’t in 2018 and take it?

The Dolphins have three 2020 first-round picks, and although a few wins during the season toyed with their chances of landing in the top five, they are almost a 95% proposition to get a pick in that range. While the 2019 campaign was not a complete wash (they recently bought into DeVante Parker long-term and linebacker Raekwon McMillan was playing well before a season-ending injury), the Dolphins have holes to fill throughout their roster. And without a second quarterback available in the draft at the level of Sam Darnold a couple of seasons ago, they could benefit from a trade back with a team looking to mortgage the farm for guys like Jeffrey Okudah, A.J. Epenesa, Tristan Wirfs or even Justin Herbert (should the Dolphins not be enamored).

Unlike the top three teams, we are almost certain that Washington will be going into the 2020 NFL Draft and season with a new (permanent) head coach. Like New York, they drafted a quarterback a season ago — a quarterback who has played admirably (the league’s eighth-highest grade) the last three weeks in Dwayne Haskins. With Terry McLaurin in the fold as one of the league’s best wide receivers already, a tackle such as Georgia’s Andrew Thomas would do wonders for the offense’s rebuild as a replacement for longtime stalwart Trent Williams.