Cole: Pressured performance is unstable, but it could be the key to quarterback prospect evaluation

The quarterback position's shifting landscape over the past several years has changed our perception of the archetype quarterback prospect. Once, the league's dominant passers were largely restricted to the pocket, as Peyton Manning, Tom Brady and Drew Brees finished near the top of efficiency and All-Pro voting on an annual basis.

While some like Brady have survived and thrived in the modern era, the top young guns in the NFL generally embody a slightly different set of skills. Patrick Mahomes, Justin Herbert, Joe Burrow and Josh Allen aren’t limited to running the ball, but they bring an enhanced ability to move outside of the pocket, which is combined with offensive game plans and schemes that lean into that trait.

The reason that pocket passing is still such a large part of quarterback prospect evaluation isn’t just being locked into antiquated quarterback notions, as it also has statistical backing. Passing from a clean pocket is more stable than under pressure, something that we’ve detailed over the years and weigh heavily in our college–to–pro projections at quarterback. It makes sense to value stable statistics over unstable ones, but the emphasis on the instability of pressured passing might be missing its ultimate importance in driving NFL success.

The level of NFL competition makes life under duress more of the norm, and the more simplified schemes that have largely been adopted throughout the leagues mean that a baseline competence of quarterback play from a clean pocket has become easier to achieve. Over time, the average pass depth has fallen, making the average pass more likely to be completed — even by quarterbacks with limited arm strength. What cannot be schemed and easily replaced is a quarterback’s ability to thrive in the worst situations. A coach can only teach to a point in terms of the ability to make difficult passes on the run or process quickly enough to make the right decision with the pass rush bearing down.

This all might seem too theoretical for a numbers guy to profess, but it’s backed by the data. While our college data is somewhat limited (back to 2014) and the number of quarterbacks to analyze coming into the NFL is even more limited, crunching the college statistics for how top quarterback selections have fared in the NFL shows a bias toward those who outperformed under pressure in college. And we have the data to apply the same metrics to the 2022 quarterback class so that we can potentially identify the best risk-reward bets for NFL success in this year’s draft.

For this analysis, I looked at the final season for every quarterback drafted into the NFL from 2014-2021 and calculated their percentile performances for expected points added (EPA) and success rate (percentage of dropbacks with positive EPA) from a clean pocket and facing pressure.

I further narrowed the analysis to the 25 quarterbacks who were selected in the first round over the last seven years, dividing them into categories of “success” or “failure” based on a combination of if they’re still starting quarterbacks (for older prospects) or my assessment as to whether they will end up there in the future.

I’ll detail the exact quarterbacks who fall into each category below as I dig into the data, but the headline numbers paint the picture of outperformance under pressure for the successful first-round quarterbacks, with an enhanced emphasis on success rate under pressure. 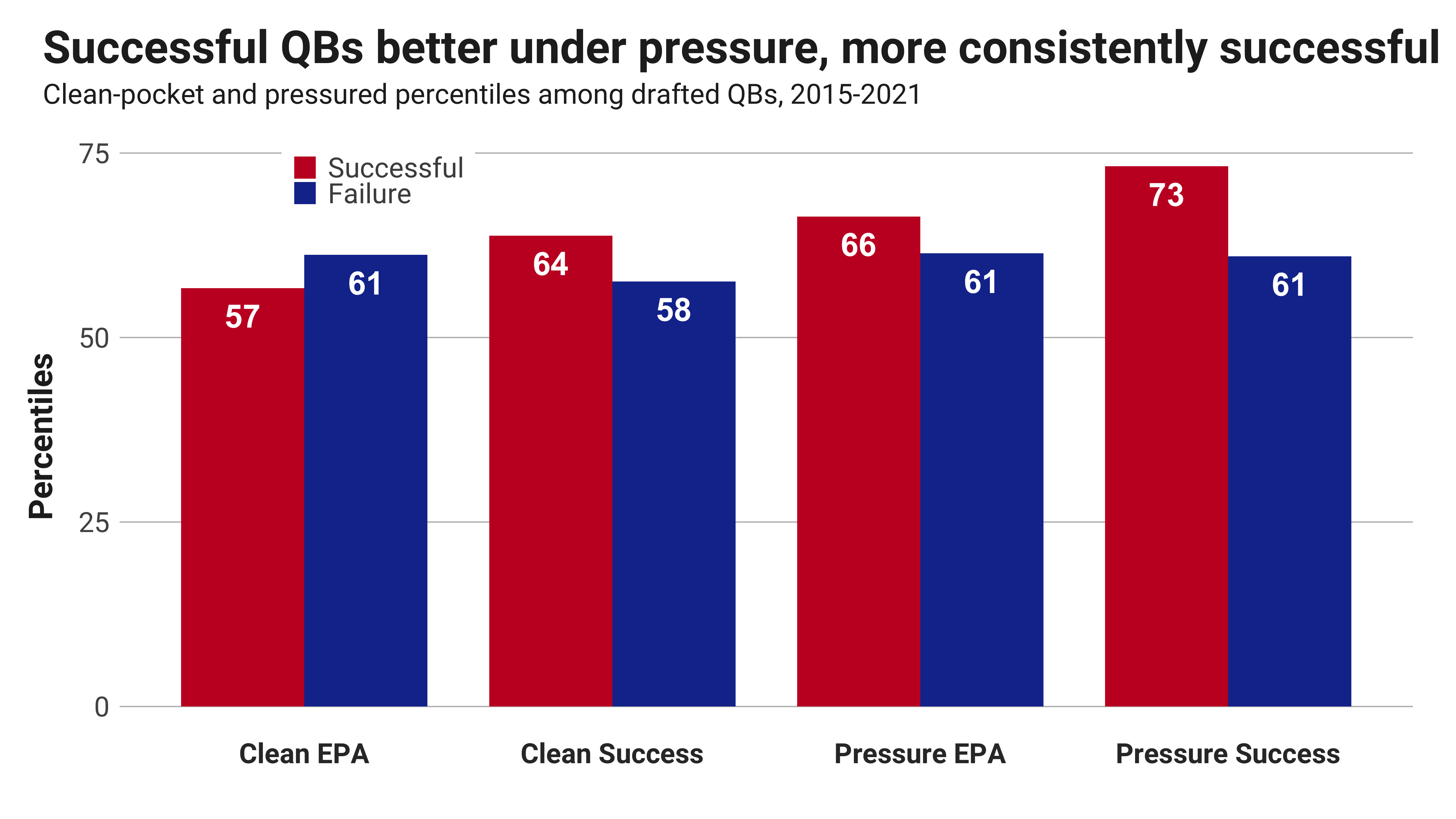 The differences in the bars above aren’t massive, but the relative values paint a picture of what might be over and undervalued in draft analysis. The average percentile for EPA added from a clean pocket is higher for the failures than the successful prospects, but the relationship flips when looking at success rate and pressured play.

Looking specifically at the difference in clean pocket EPA and success rate, this is likely explained by an inordinate number of big plays for the unsuccessful quarterbacks, which skews their results higher on a per-play basis but doesn’t make them as consistent. The quarterbacks who were able to drive high efficiency by making big plays from ideal circumstances may have fooled evaluators into thinking that will also happen in the NFL, where those opportunities are less frequent and the surrounding talent differentials are narrower. The same big-play-versus-consistency dynamic also applies to pressured passing, where the quarterbacks who were successful in the NFL lean more toward the stability of consistent performance.

You might dispute the notion that Jared Goff or Carson Wentz belongs in the “success” category for prospects, but both have been starting quarterbacks seven years into their NFL careers and have had multiple seasons of above-average quarterback play. Justin Herbert, Joe Burrow and Kyler Murray haven’t made it to their second contracts, but all are a matter of time, in my opinion. Jameis Winston is another questionable selection as a success, but he has some good aggregate numbers over his career and has a chance to start again in 2022.