PFF Data Study: Yards after the catch figures largely determined by factors before the catch

Before joining the Carolina Panthers in free agency after the 2019 season, New York Jets wide receiver Robby Anderson would have been considered hardly adept at producing after the catch.

After all, he averaged only 3.5 yards with the ball in his hands, trailing the league average of 4.4 yards by a healthy margin. But a new environment did wonders for Anderson's production in that regard. He notched 5.0 yards after the catch (YAC) per reception in 2020 with Carolina.

Anderson didn’t necessarily become better as an overall receiver — his PFF receiving grade was 68.0 in 2019, and it took just a small jump to 75.0 in 2020. He was just put in a better situation to succeed, which is what yards after the catch is all about.

Like most things in football, YAC is determined by a variety of factors — not just what the receiver does with the ball in their hands. In fact, using a myriad of different variables, including receiver separation, throw accuracy, and target yard line, much of YAC can be predicted before it actually happens.

Anderson saw an increase of five percentage points in accurate throw rate after changing quarterbacks, from Sam Darnold to Teddy Bridgewater. His average depth of target (aDOT) went from 16.1 yards to 9.8. He also was open on 43% of his targets in 2020 compared to 37% in 2019. While Anderson didn’t necessarily improve with the ball in his hands in 2020, so many things around him changed that his YAC just happened to improve because of it.

One of the most important factors in determining YAC is the receiver's separation at the catch point. At PFF, every pass since 2017 has been charted with six main labels regarding receiver separation, ranging from wide open to tightly covered. 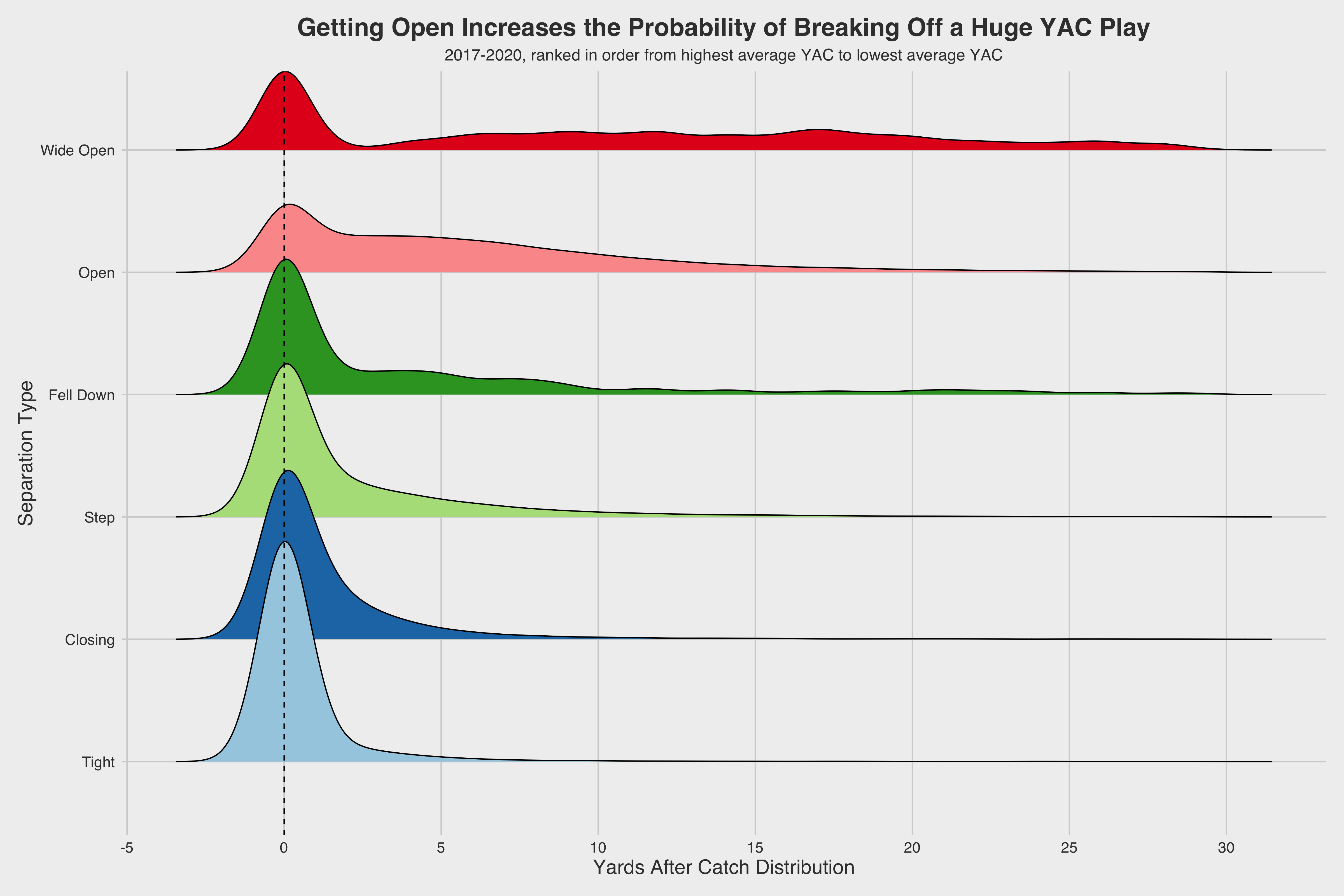 In the plot above, the “Wide Open” and “Open” labels are much less concentrated around the zero YAC marker and greatly increase the probability of breaking off a huge YAC play. When a receiver is tightly covered, they almost never get more than three yards after the catch on the play.

One could argue that receivers who are better at separating will also be better at producing YAC, but we will show how receiver separation is just one of the many pre-catch factors that impact how many yards after the catch a player will generate. And a lot of it is out of the receiver’s control.

Quarterbacks have a substantial influence over YAC. If YAC was purely based on wide receivers and scheme, then we’d expect to see no correlation between a quarterback’s average YAC in year N compared to year N + 1 (the next year). However, that doesn’t seem to be the case. 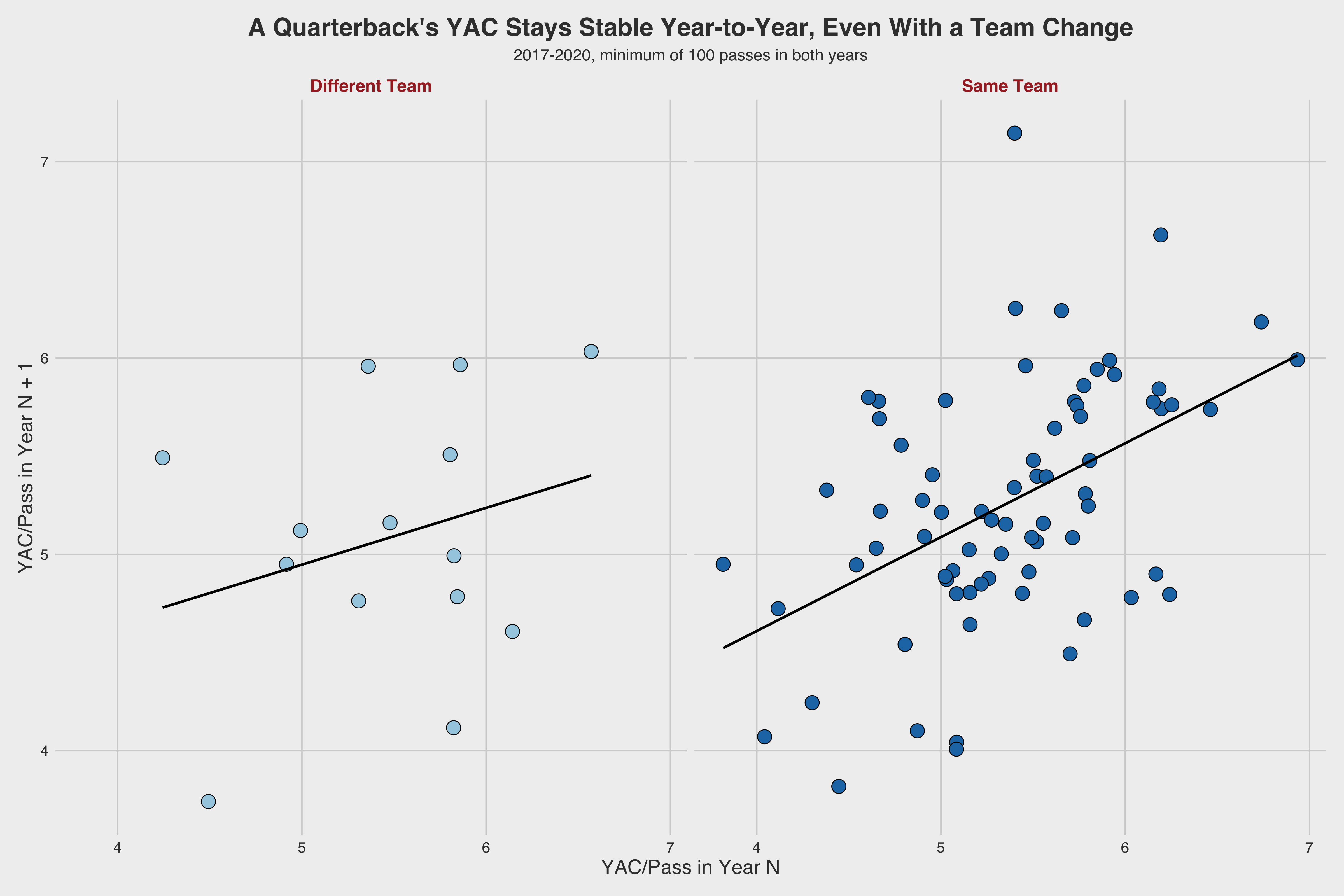 When a receiver is open, a quarterback can maximize their ability to gain the most YAC by delivering a throw that is labeled as “accurate” by PFF charting. 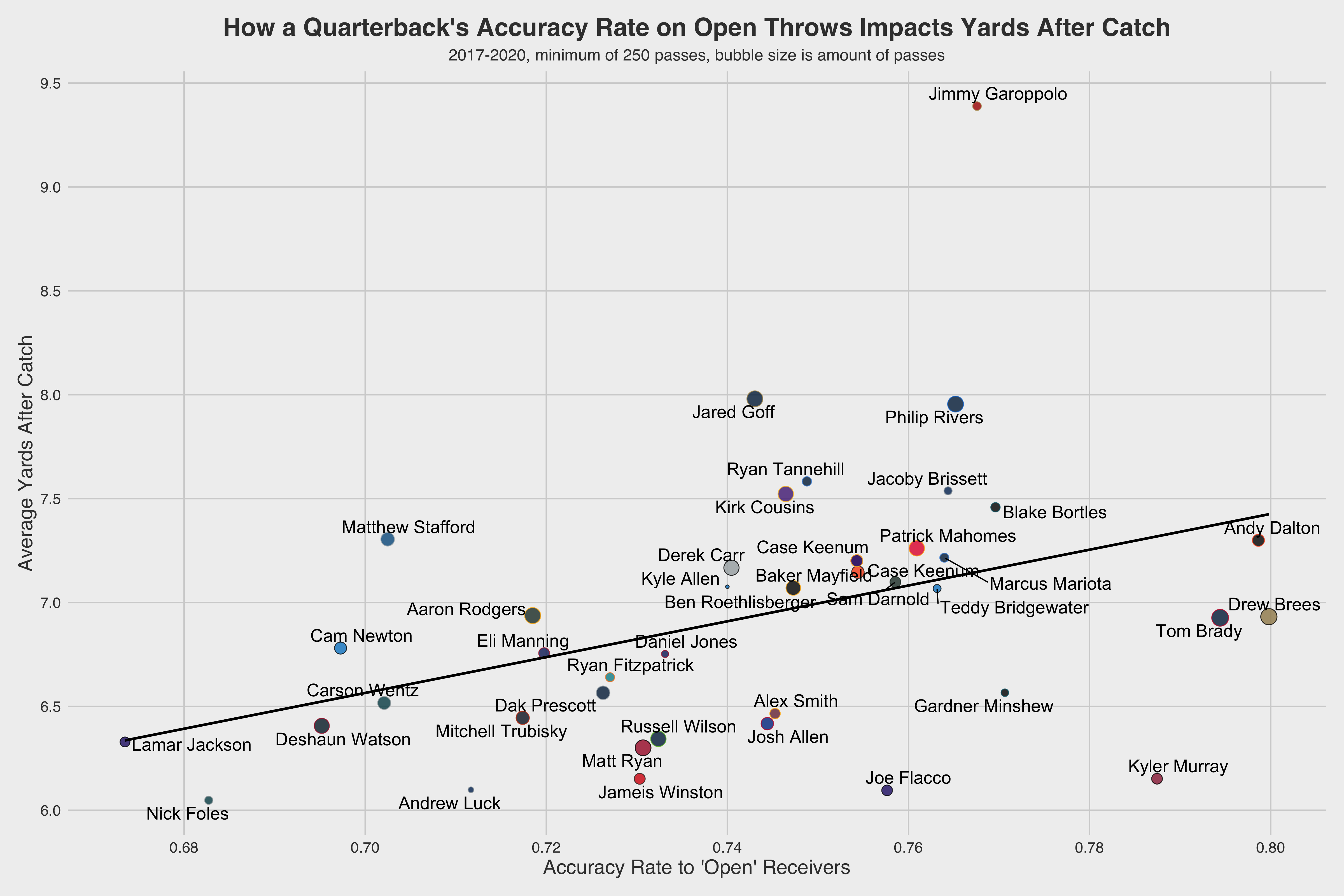 This shows us that a quarterback’s accuracy on open-window throws influences the YAC that their receivers will generate. There are some exceptions to this: San Francisco 49ers quarterback Jimmy Garoppolo has been the beneficiary of the most YAC of any quarterback in the NFL since 2017, partly because he’s been in the top 10 when it comes to accuracy but also because head coach Kyle Shanahan’s scheme, which uses play action at a top-10 rate, is unique and innovative.

Play action, the number of defenders in the box and yard line can affect YAC, too: 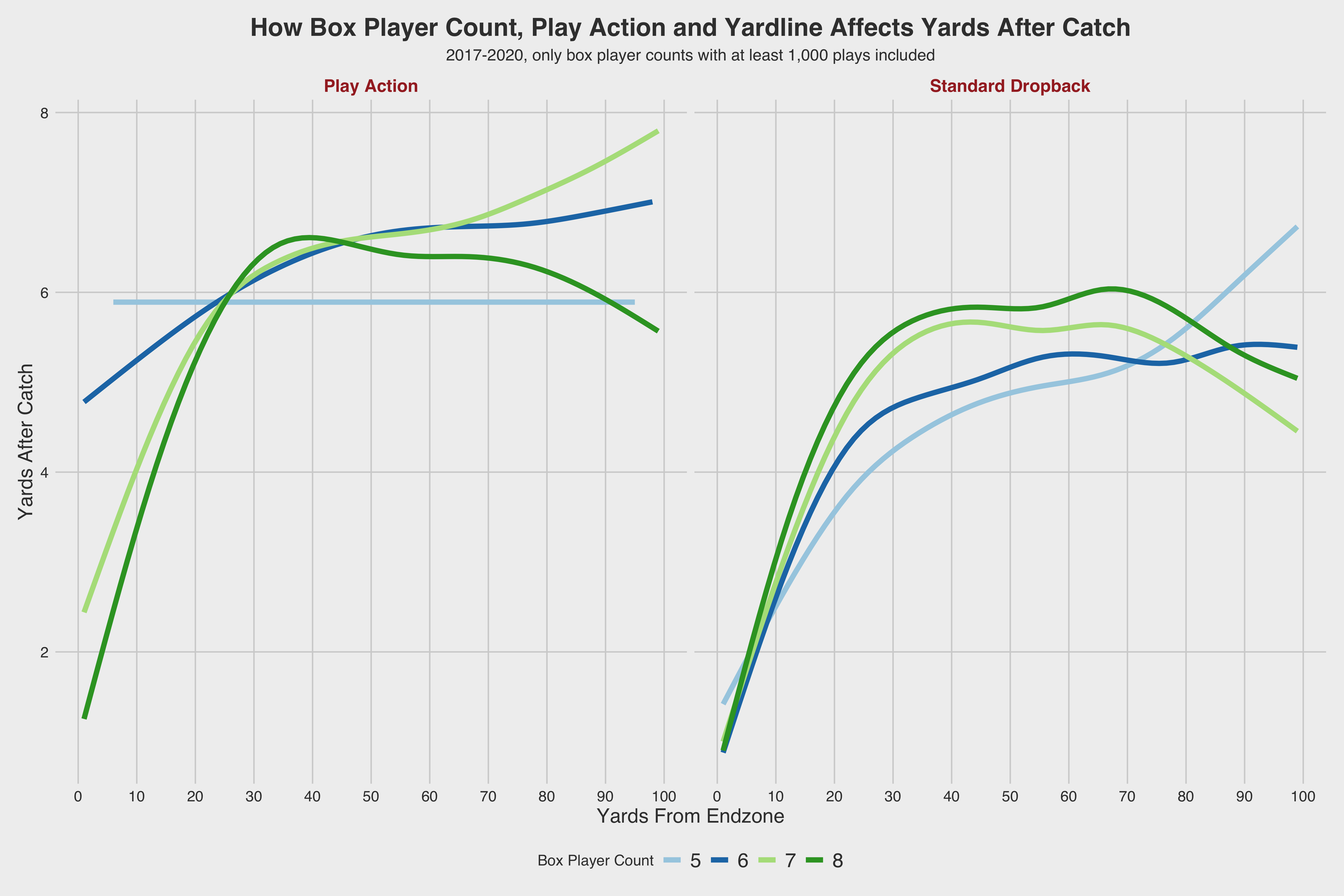 Running play action immediately raises the ceiling for YAC, and doing so is especially good when there’s a heavy box (7 or 8 players). Standard dropbacks produce more YAC against heavier boxes, but survivorship bias needs to be considered here, as heavier box counts lead to more pressure and positive YAC means a completion occurred. An additional big factor for YAC is the yard line the ball is targeted to. Specifically, screen plays invite receivers to do more after the catch: 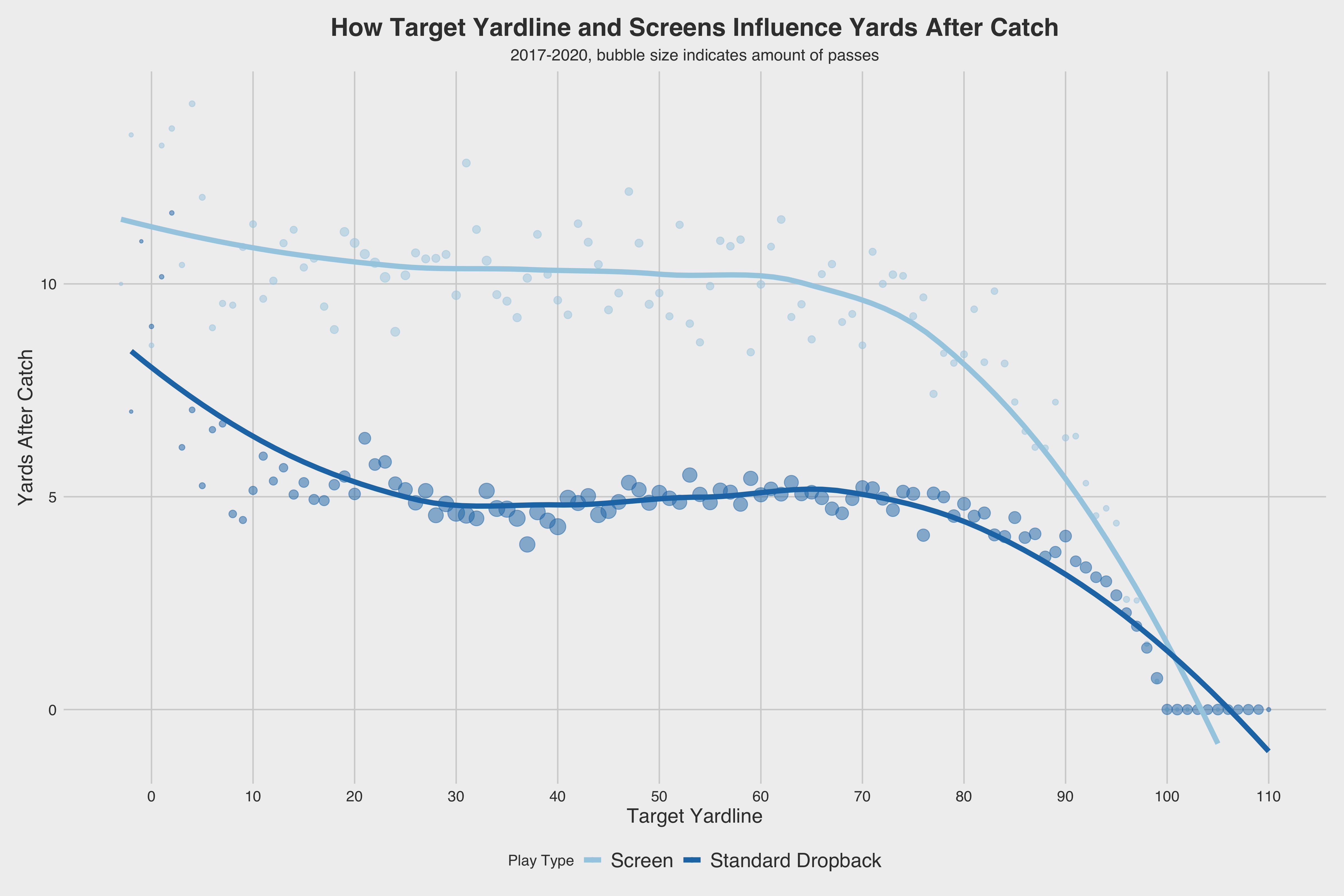 Screens see a rise in YAC compared to standard dropbacks, no matter the target yard line of the throw. However, they see a dramatic dropoff in the red zone (when target yard line is great than 80), as the crowding of multiple defenders in a tight area makes it tougher for receivers to produce after the catch there. Using all of these factors, we can project a receiver’s expected YAC and compare it to their actual YAC. 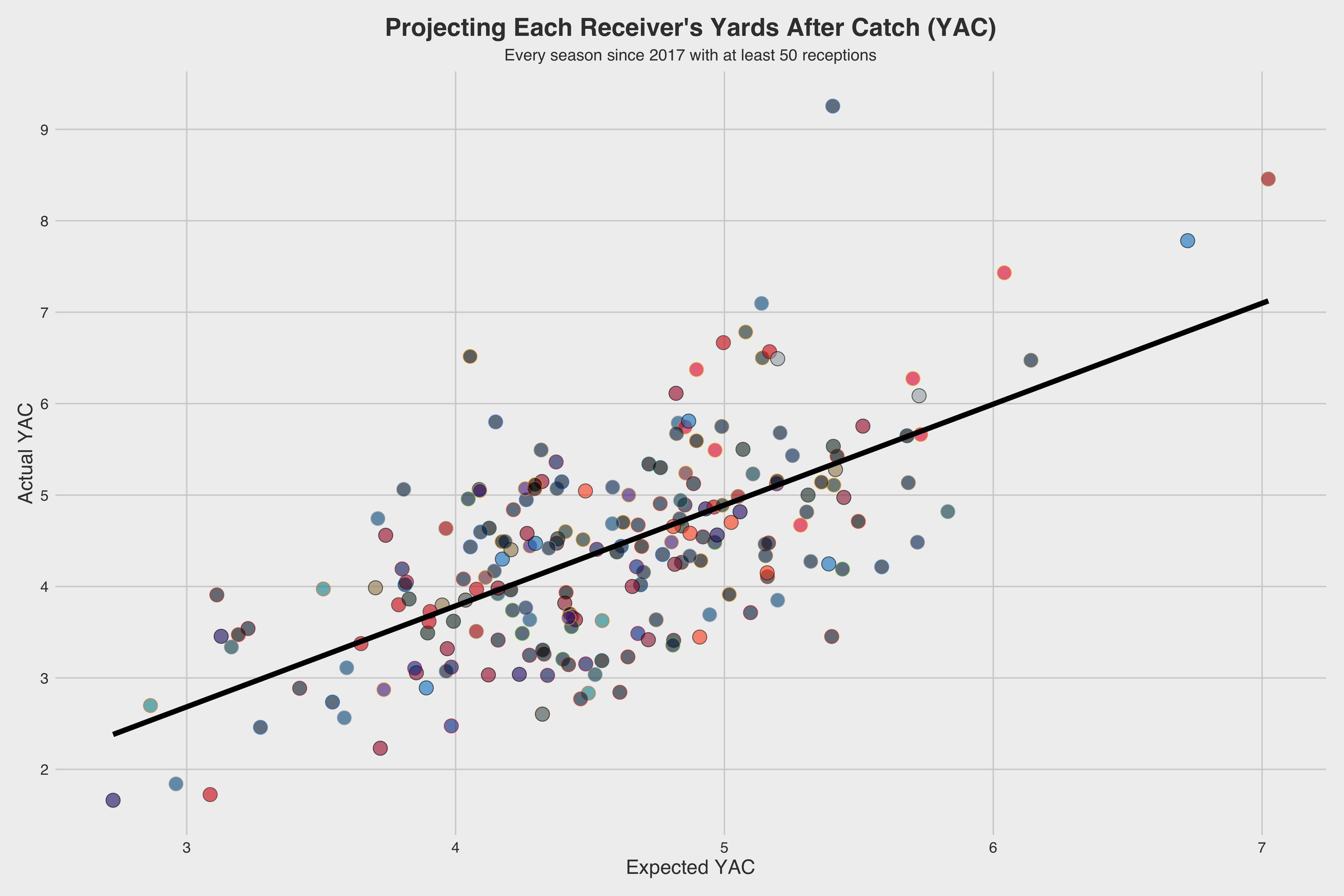 Some 70% of receiver seasons with at least 50 receptions since 2017 have had their actual YAC fall within one yard of their expected YAC. This means that, using the different variables involved in YAC, we can feel good about what a player’s YAC will be before the “yards after the catch” component takes effect. However, since 2017 there have been some exceptions, highlighted by Cooper Kupp and Tyler Lockett. 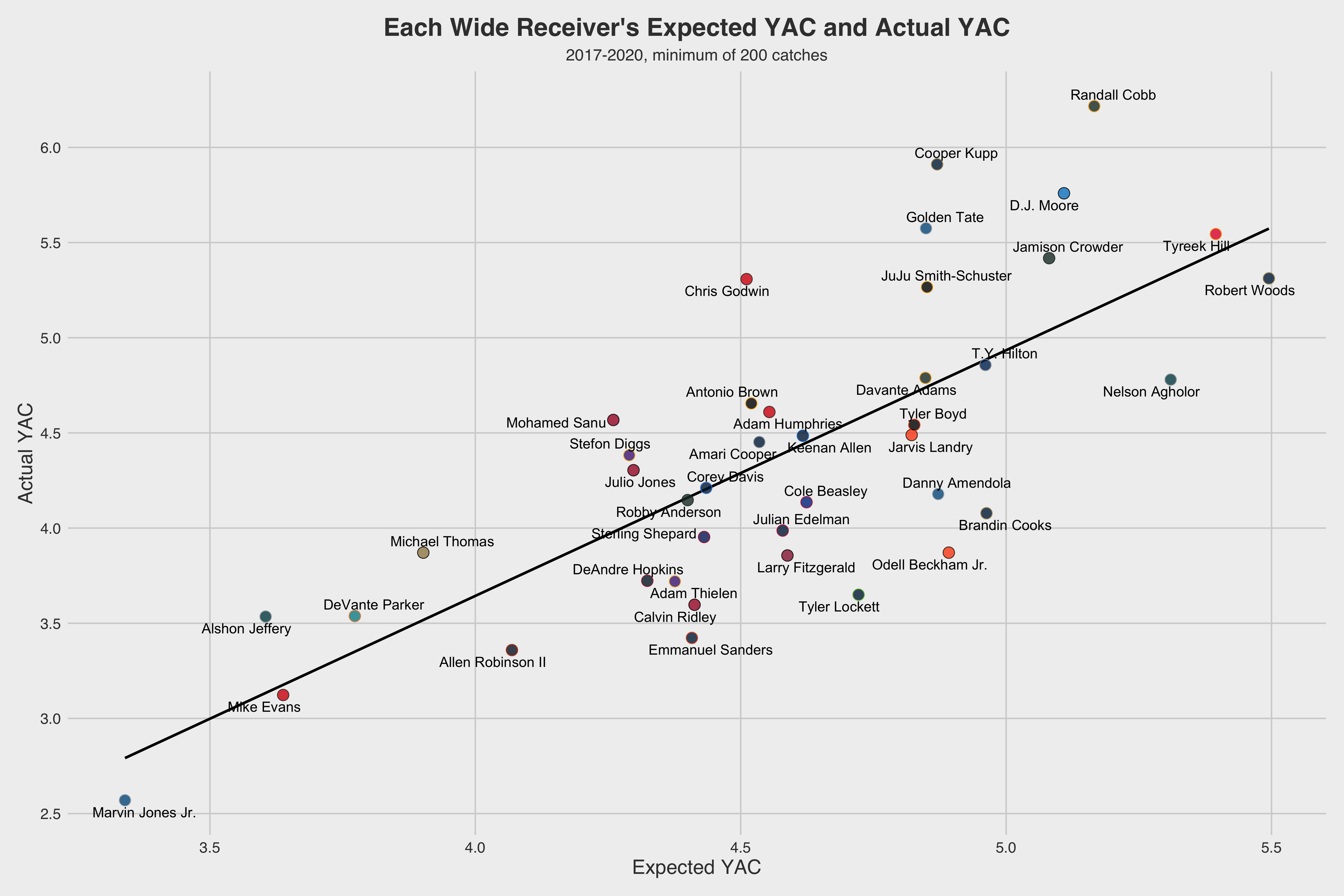 No one with at least 250 receptions has had a lower expected YAC and actual YAC than Marvin Jones Jr. This is largely due to him having a high aDOT and ranking 53rd out of 57th in creating separation during that time period. With former Lions quarterback Matthew Stafford moving from Detroit to Los Angeles, he will be pleased to see that the Rams have excelled at setting themselves up for a high expected YAC. In fact, Kupp has had the highest average YAC over expected in this time period. 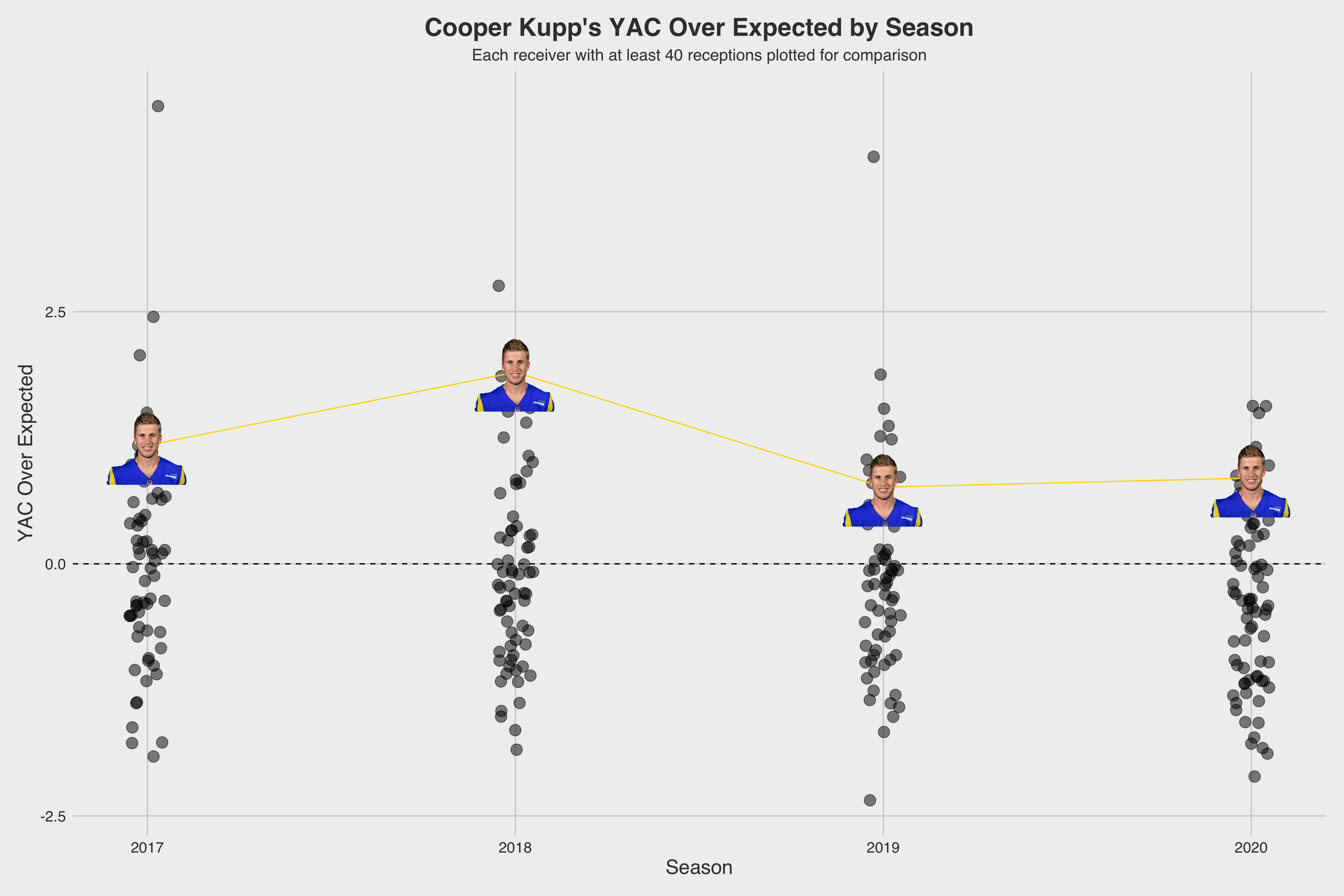 Kupp was dominating in head coach Sean Mcvay’s scheme in 2017 and 2018, but his torn ACL in 2018 led to a slight drop-off in his YAC over expected. Nevertheless, he is still one of the NFL’s best at getting open and generating yards after the catch. 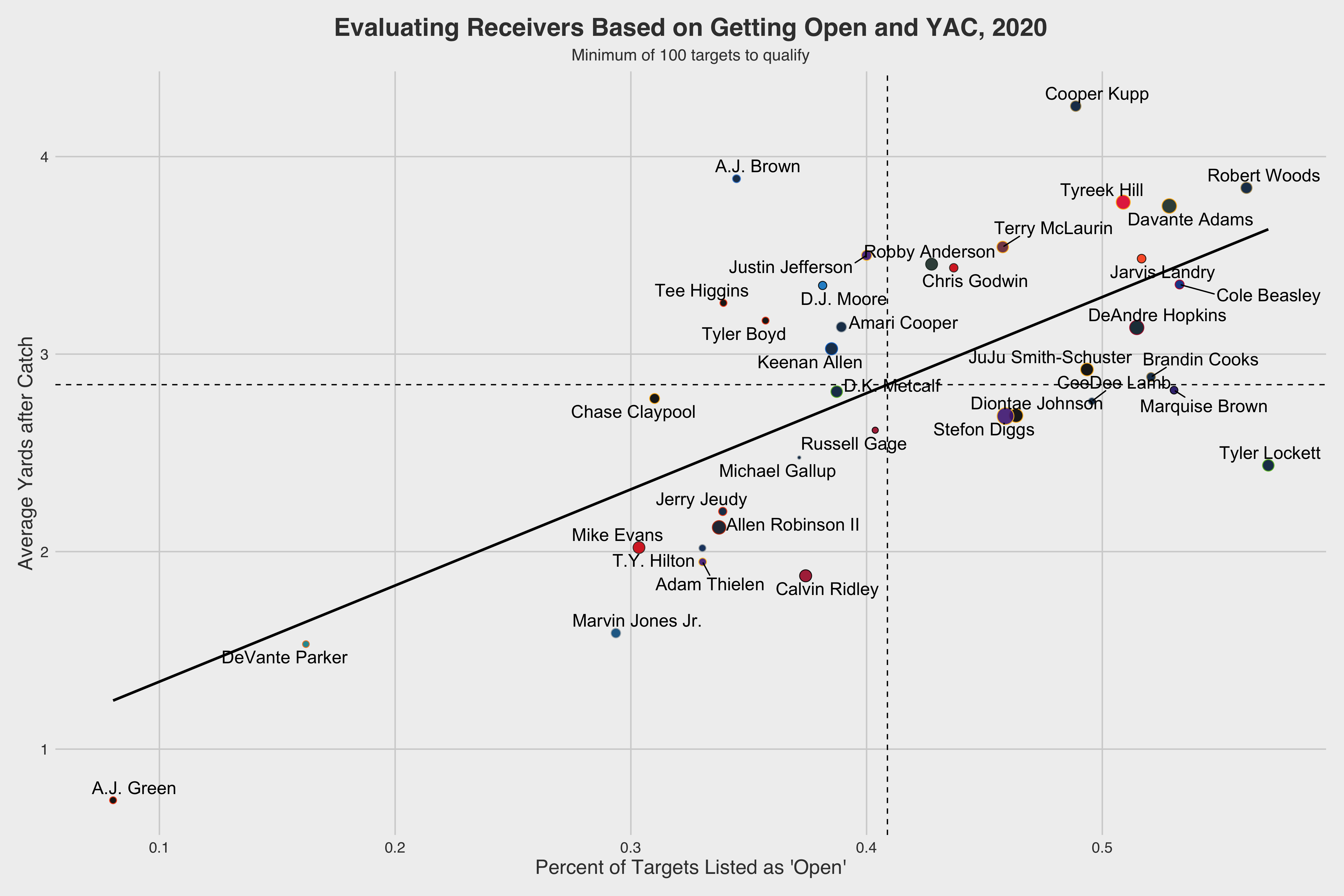 A.J. Brown has ranked first in both 2019 and 2020 for YAC over expected. He doesn’t get open as often as receivers Tyreek Hill or Davante Adams, but he seems to be a rare exception to YAC being more based around the situation than a specific player.

Most yards after the catch are determined by a variety of factors, including how open the receiver is, how accurate the throw is from the quarterback, the number of box players and where the throw is on the field. Teams shouldn’t look for pure high-YAC players in free agency and the draft, but they should focus on putting players who can separate and get open into situations where they can maximize their yards after the catch.