'Patrick Mahomes refuses to play boring football': The root of the Kansas City Chiefs' offensive struggles and the key to fixing it

Wins are not easy to come by in the NFL, so it must be hard to feel low after winning a game so long as one comes out healthy on the other end.

However, of all those victorious over last weekend, no team is closer to smashing the panic button than the Kansas City Chiefs. After a 13-7 win over the Aaron Rodgers-less Green Bay Packers in Week 9, the Chiefs' offense officially hit its lowest point of the season. The juggernaut that has carried them to back-to-back Super Bowl appearances is officially nowhere to be found.

There was a period when everyone wanted to blame the turnovers for the Chiefs' offensive struggles, as quarterback Patrick Mahomes threw 10 picks through his first eight games. But, last Sunday against the Packers, the Chiefs' offense didn’t give the ball away once yet put up just 13 points.

The other popular narrative is that it’s because defenses aren’t blitzing Mahomes anymore. And while it is true that defenses have opted to keep the extra man in coverage, blitzing the Chiefs quarterback at the lowest rate of his career at just 13.5%, Mahomes has carved defenses up in the past even when they didn’t blitz.

Through nine weeks, Mahomes has generated just 0.102 expected points added (EPA) per play on non-blitzed dropbacks, which is less than half of his previous career low of 0.219 set in 2019. This, of course, suggests there’s a little something more at play here schematically.

The answer to that has unequivocally been two-high coverage shells. Through nine games, the vast majority of Kansas City’s offensive plays look something like this when the ball is snapped. 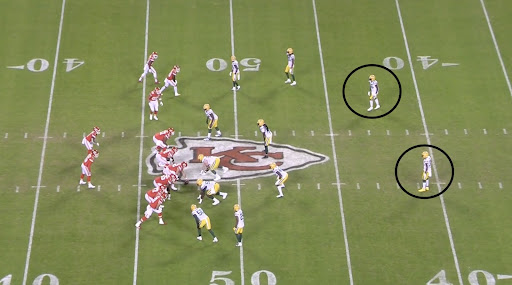 We’ll get into exactly what this means from a schematic perspective in a second, but the reason defenses continue to do it is simple: It helps cap downfield passes.

The Chiefs have seen the middle of the field open pre-snap on 497 of their 648 offensive snaps this season, 129 more snaps than any other team in the league.

Opposing defenses couldn't care less about the Chiefs' run game. All they want to do is flood the middle of the field to shut down many of the passing concepts the Chiefs have raked during the Mahomes era.