Monson: The case for the Saints to start Taysom Hill over Jameis Winston

One of the burning questions as we enter the 2021 NFL season is who should start at quarterback for the New Orleans Saints now that Drew Brees has hung up his boots. The prevailing opinion is that Jameis Winston is the clear favorite for the job and — as the most conventional quarterback — the most natural successor to Brees. But does that mean he gives them the best chance to win?

The Taysom Hill saga has been treated as something of a joke in New Orleans ever since Sean Payton started referring to him as the next Steve Young, but when Brees was injured late in the season the team turned to Hill and not Winston to start games.

Though he has been a gimmick for most of his NFL career, we explored the possibilities created by a Hill-led offense in this article last year. In a league that has never been more prepared and willing to craft an offense around a rare athlete, Hill has a skill set that lends itself to that kind of system. Sean Payton may embrace that challenge rather than trying to cajole Winston into a bad Brees impersonation as his successor.

The idea that Winston is a more natural successor to Brees because he is closer to a prototypical pocket passer than Hill seems to lack key pieces of information. Yes, Winston has a 5,000-yard passing season to his name — and that’s something Hill is never likely to achieve at the NFL level — but Winston also has a catastrophic propensity for turnovers, basically what the offense was built around avoiding with Brees at quarterback.

Winston has 88 career interceptions and 150 career turnover-worthy plays (TWPs) in five-plus starting seasons. In three times the playing time, Brees has less than twice the TWPs (289). Brees has a TWP rate of 3.0% since becoming the Saints starter in 2006. Winston is at 4.8%. That might not sound like a big difference, but last season it was the equivalent of dropping 20 spots in the rankings league-wide.

Plus, these are only the worst of the negative plays. One of the most stable metrics PFF has identified in quarterback play is the percentage of plays that result in a negative grade for the quarterback. Essentially, passers control their mistakes far more than they control their positive plays, and that figure predicts future play far better.

Winston is in the seventh percentile over his starting tenure with the Bucs in terms of negatively graded play rate. Even including an ugly 2020, Brees was in the 98th percentile as a starter for New Orleans. The yawning chasm between the two players in style and error-prone nature is just as large as the one between Brees and Hill in terms of how they play the game. But the errors don't manifest themselves the same way when considering a difference in athleticism or tendency to scramble.

Hill isn’t as special an athlete as Lamar Jackson, but his rushing threat opens up many of the same advantages. Including Hill as a rushing threat changes the dynamics at play on defense and how many players need to commit to the run game, in turn opening up passing lanes and throwing windows. Effectively, players like Jackson, Hill, Jalen Hurts, Kyler Murray, etc., are able to make their own lives easier in the passing game because of what they can do with the ball in their hands as a designed part of the run game.

Take this play against the 49ers last year as a perfect example. The Saints are able to manufacture a light (six-man) box because they line up in an empty formation, which typically presents no run threat. But with Hill as the quarterback and a tight end attached to the left, they have a blocker for every defender in the box and Hill as a ball carrier. They run a trap play and Hill isn’t touched until the free safety brings him down to save the touchdown. 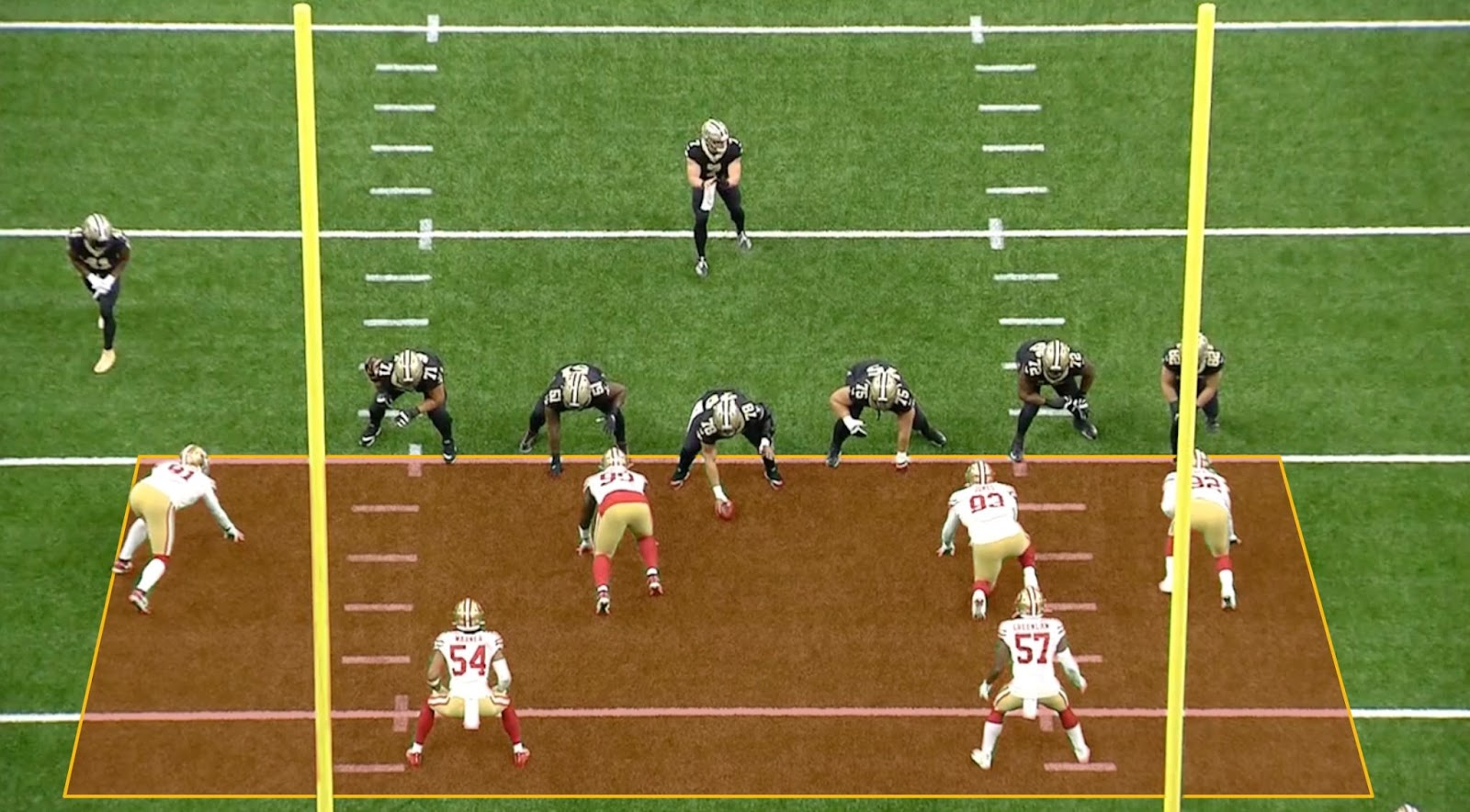 These are the kinds of issues that Hill’s rushing threat causes a defense, and the adjustments the opposition makes to stop them can open up throwing lanes, which makes his life easier as a passer.

Hill’s passing is good enough to take advantage of those increased spaces. He had the highest adjusted completion rate (82.6%) in the NFL last season in his limited time. That statistic is a little misleading because it is a better measure of catchability than it is true accuracy from a ball-location standpoint, which impacts yards after the catch and overall production.

It’s also a data point heavily influenced by depth of target — shorter passes are easier to complete than longer ones. Hill’s true “accuracy” rate was much lower, but he critically doesn’t throw many truly uncatchable passes. While Brees was the most accurate passer in the NFL in terms of true ball location last season and Hill ranked 35th out of 44 qualifiers, they ranked 1-2 in terms of the lowest uncatchable pass rate in the NFL — and Hill was the player leading. Hill can get the ball to receivers with regularity, which is what the Saints need from him. He can’t hit them with the same metronomic pinpoint accuracy that Brees could, but few quarterbacks can. To offset the difference in accuracy, Hill’s rushing threat creates a greater margin for error for himself.

On passes up to 20 yards down field, Hill had a top-10 PFF passing grade last season, sandwiched between Tom Brady and Ryan Tannehill. He also had a higher average depth of target than you might expect (8.5 yards down field, tied for sixth). Where Hill’s passing struggles showed up was the deep ball, where he had one of the lowest PFF passing grades (52.8) in the league. Hill was missing most of his deep shots, and even the ones he was connecting on were typically badly underthrown. He had one of the lowest rates of deep passing in the league, so the team was leaving a huge volume of passing production on the table — to a degree that could undermine everything else he does.

If this was a permanent flaw, it would be one that invalidates his case for a starting job, but there is no reason it should be. We are fresh off seeing Josh Allen go from grading as the single worst deep passer in the league in 2019 to the sixth-best in 2020, completely transforming his overall game and the production of the Bills offense alongside Stefon Diggs. Hill doesn’t have Allen’s arm, and the cause of his struggles is different, but there is no reason he can’t be coached to get the ball in the air earlier to stop being late and underthrowing the shots he does take. If that element of his game improves to just an average level, a Taysom Hill offense becomes not just a functional one, but an offense that will pose genuine problems for even the best defenses in the NFL.

Hill may already be 30 years old, but he is extremely young in terms of experience as a starting quarterback. We should expect some kind of improvement and development from him as a full-time starter should he win the job. An offense featuring a rare athlete at quarterback who is efficient enough as a passer to take advantage of the opportunities he creates is a dangerous thing. Winston trying to rein in a crippling tendency to make mistakes seems like a recipe for failure, even if it is the easier path forward.

The smartest thing the Saints can do to try and stay among the league’s elite in a post-Brees era is zig when everyone expects them to zag.