We have reached team-building season, meaning it’s time for free agency and the draft to take center stage. Looking back at last offseason, we can evaluate the signings, trades and draft picks that made the most impact as identified by PFF’s proprietary WAR (wins above replacement) metric. While PFF grades show how well a player performed at his given role against his peers, WAR identifies those players who played well in the most important facets of the game. Here’s a look at the most valuable offseason additions at each position, including all free agents, rookies, and players procured through trade. 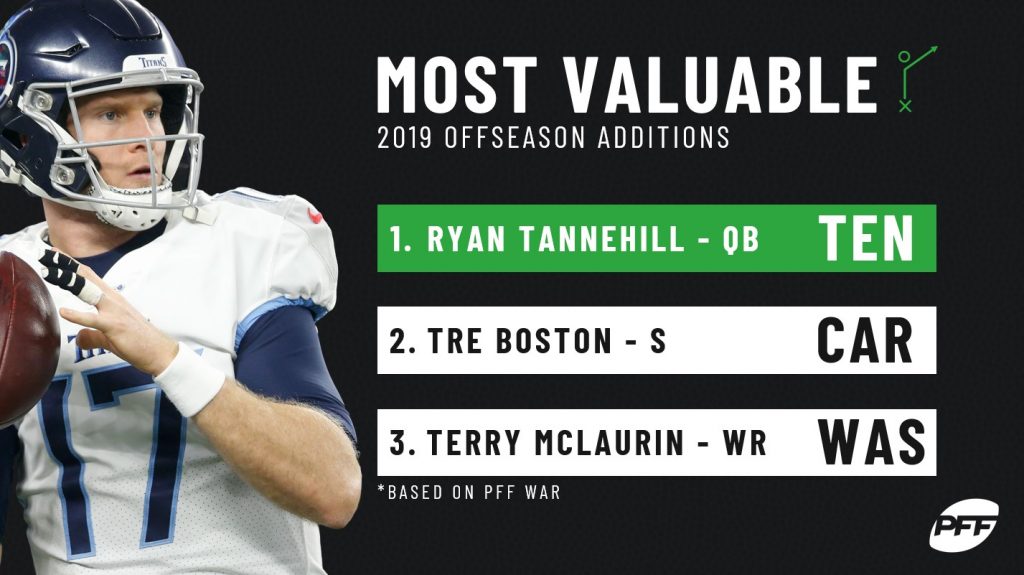 Tannehill is the obvious choice for most valuable quarterback, as he put together the best season of his career on his way to the No. 3 overall grade in the league including the playoffs. Tannehill was incredibly accurate, ranking third in accuracy percentage on throws of five-plus yards and leading the way with the highest percentage of “perfect” throws. It all culminated in one of the best statistical seasons in recent memory, and Tannehill’s emergence was the catalyst for Tennessee’s trek to the AFC Championship.

The run-heavy system in Baltimore did well for Ingram, who finished with 5.0 yards per carry and tied a career-high with 3.06 yards after contact per rush. Ingram’s hard-charging style fits perfectly in the Ravens’ downhill scheme, and the excellent run-blocking combined with quarterback Lamar Jackson’s rushing ability gives Ingram more opportunities to get to the second level and make defenders pay.

A third-round rookie, it was immediately apparent that McLaurin was a steal after flashing his ability to get open at all levels of the field in Week 1. McLaurin finished with the No. 6 receiving grade among wide receivers despite uneven quarterback play from both Case Keenum and Dwayne Haskins. McLaurin’s route-running and big-play ability made him an instant star to build around in Washington.

Cook became quarterback Drew Brees’ complementary weapon to unstoppable wide receiver Michael Thomas. Cook’s 80.8 receiving grade is the second best of his career, and his 5.8 yards after the catch per reception is his best mark since 2011. Saints quarterbacks posted a passer rating of 140.1 when targeting Cook this season, which was best among tight ends with at least 40 targets.

The Texans gave up a massive haul to acquire Tunsil, but he delivered with the best season of his young career. Tunsil’s emergence was a huge part of Houston’s move from one of the worst offensive lines in the league to a mid-tier unit, an upgrade that has incredible value and cuts down on negative plays. Tunsil’s 88.2 pass-blocking grade ranked third in the league, as he allowed just 29 pressures on 694 attempts.

An offseason trade brought Zeitler to New York, and he shored up the right guard spot for the Giants. He finished with the sixth-best grade among guards and posted a strong 75.0 pass-blocking grade — the sixth-straight year he’s achieved that mark. Zeitler just edges Oakland Raiders guard Richie Incognito for most valuable offseason addition, in part because he was on the field for 200 more snaps.

It’s not easy for a rookie to come in and make an impact on the interior offensive line, but that’s just what McCoy did this season. His 76.2 overall grade ranked fourth among centers, as he allowed just 14 total pressures during the regular season and ranked third in run-blocking grade. The Saints filled a need with McCoy in the second round of the draft last year, and it’s already paying off.

The league leader with 93 pressures, Smith made an immediate impact on the Packers' defense after coming over from the Ravens. It was by far the best season of Smith’s career, as he posted career-highs in overall, pass-rushing and run-defense grades all while wreaking havoc from all over the defensive front.

It was a lean year for interior defensive linemen in free agency and the draft, and McCoy’s solid all-around performance gives him the nod. He had nine games with at least three pressures, finishing the season with 42 total pressures — good for 14th among interior linemen. McCoy was also strong in the run game, ranking 18th with a 77.1 grade, and he showed that he can still contribute up front despite playing in his 10th season.

Collins was a magnet for the football early in the season — he picked off passes, forced fumbles and sacked the quarterback weekly. His 76.5 overall grade ranks 10th among linebackers and he ranked second behind teammate Dont’a Hightower with his 32 total pressures. Collins was also excellent in coverage, as he had three interceptions and two pass breakups while allowing just a 50.4 passer rating into his coverage.

Nelson put together a career year in his first season in Pittsburgh, grading at 80.5 overall — good for sixth best in the league during the regular season. He allowed just a 51.5% completion rate into his coverage, good for 12th best, and he played over 1,000 snaps — one of just 10 cornerbacks to do so. While there were other solid free agent and rookie performances at cornerback, none were as consistent as Nelson’s season.

Despite ranking as one of the league’s most valuable coverage defenders, Boston was on his third team in three years. He tied for sixth in the league with seven pass breakups while adding three interceptions and finishing fourth among safeties with a 90.6 coverage grade. He did miss 13 tackles, which is an issue, but Boston has patrolled the deep middle as well as any safety in the league over the past three seasons — and he hits free agency once again.