Can Dak Prescott and the Dallas Cowboys thrive in a Mike McCarthy offense?

After a week of rumblings about the future of now former head coach Jason Garrett, the Dallas Cowboys moved quickly. Over 24 hours, news leaked that Garrett will indeed be sent packing and replaced by former Green Bay Packers’ head coach Mike McCarthy. McCarthy brings a resume of success as a Super Bowl winner, one of the most impressive records in modern coaching (going 125-77-2 in regular season over 13 years), and 10 playoff victories.

McCarthy reportedly took time during his year off from coaching to studying up on league trends, and he crafted a detailed plan to incorporate more analytics into his new staff. Despite his resume and buzzword-filled plans, opinions of the McCarthy hire aren’t universally positive. Many soured on McCarthy over the last few years of his Packers’ tenure, as the offense struggled generally, and the drop in efficiency of his all-world quarterback Aaron Rodgers was laid at the feet of his coach. If McCarthy could no longer get top performance out of the best, why should he be trusted to continue?

The perceptions on McCarthy haven’t completely shifted, but events this season have bolstered the case that Rodgers’ struggles weren’t singularly related to his coach. Rodgers’ efficiency hasn’t risen under the system of new head coach Matt LaFleur, while his passing grade has fallen year-over-year to seventh this season (79.9) from sixth a year ago (87.0).

The thought that McCarthy’s success was a product of his quarterback also doesn’t align with his pre-Rodgers work as the offensive coordinator of the New Orleans Saints. McCarthy was part of five straight league-average or better seasons, in terms of passing efficiency, for Aaron Brooks from 2000 to 2004. Brooks’ performance fell significantly with McCarthy departure and washed out of the league a few years later.

The question is how much McCarthy can now get the best out of Dak Prescott on the heels of his best season. Prescott went from the 17th (74.3) to ninth (76.8) highest-graded passer over the last year, and was in the MVP conversation for a good portion of the season. Most important will be how McCarthy’s offensive vision aligns with what’s best for Prescott, assuming he’s returning, and if he can update his offensive philosophy to match the analytical lessons coaches are incorporating more in recent years.

Comparing McCarthy’s Packers and the Cowboys

Below are the numbers team-by-team for the entire NFL from 2014 to 2019, with the Cowboys and McCarthy Packers (excludes 2019). 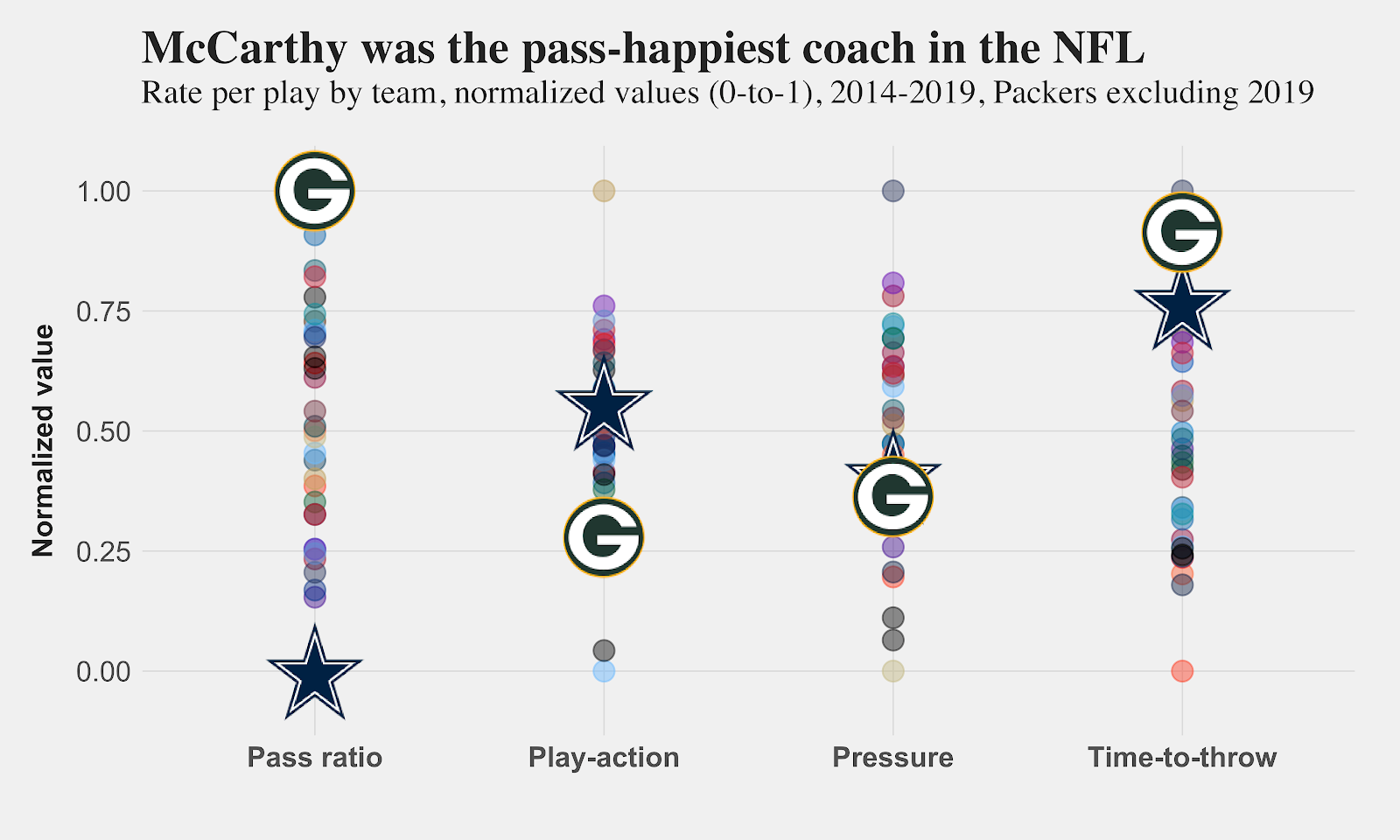 The Packers were the most pass-heavy team in the NFL during McCarthy tenure from 2014-2018, dropping back to pass on 66.2% of plays. The Cowboys were on the opposite end of the spectrum, only passing on 57.3% of plays. Some of that could be the difference in quarterbacks, though the divergence is so drastic as to indicate a philosophical difference.

One of the lessons of analytics is that teams probably still aren’t passing enough, so McCarthy’s propensity to call passes isn’t necessarily an issue. A bigger potential flaw in McCarthy’s pasts offenses is a lower play-action passing rate. Teams have consistently performed better with play-action than regular dropback passing, and it’s likely Prescott’s offensive breakout this season was at least partially related to the Cowboys’ having the seventh-highest play-action rate (44.5%) in game-neutral situations. From 2015-2018, McCarthy’s Packers never ranked higher than 21st in play-action usage.

In recent years, the Cowboys have faced pressure about as often the McCarthy’s Packers, and both teams had particularly high time-to-throw averages. It’s difficult to separate play-caller and scheme from quarterback with these measures, as our data scientist Eric Eager has shown the great degree of control that quarterbacks have their own pressure rates due to their propensity to hold the ball.

While the macro numbers show a great divergence between what McCarthy had done with the Packers, a closer inspection into what the offensive coach specifically controls, like route scheme, shows that the Cowboys scheme might be closer to McCarthy’s than assumed.

PFF data scientist Timo Riske has turned our data play-by-play and receiver tracking data into a robust system for identifying and clustering pass schemes based on receiver patterns, route combinations, plus play-action and screen usage. What we find is that the scheme for the Cowboys has evolved over the years to become closer to what McCarthy was running with the Packers. 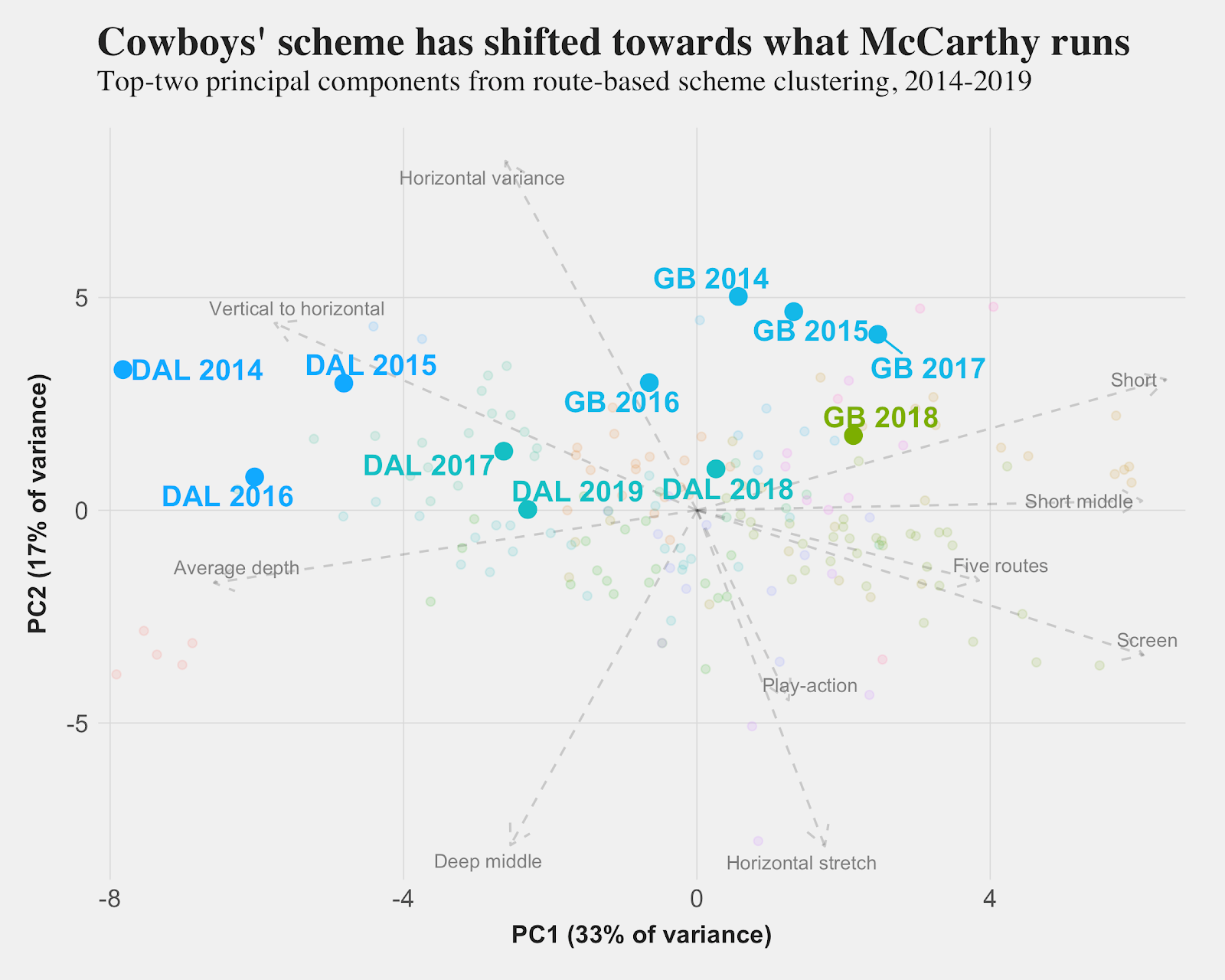 The colors on the plot above indicate the cluster of the underlying team-season, and you’ll notice the shift for the Cowboys from the outskirts of vertical passing offenses from 2014 to 2016 — the pre-Prescott years and his rookie season — to the last three seasons in the middle of the plot. McCathy’s offenses with the Packers are further shifted to the right and higher on the plot, which indicates fewer vertical routes and less play-action usage.

The offenses are different, but the differences between the Packers offensive pass scheme in 2016 and that of the Cowboys’ in 2018 and 2019 isn’t as dramatic as you might think. If McCarthy can bring a similar offense to Dallas, while incorporating more play-action passing with his tendency to pass more often, the combination could unlock the Prescott’s efficiency and volume.

Studies have shown that the idea you need to establish the run for play-action passing to work is bunk. McCarthy has the opportunity to apply these lessons on the field and deploy an offense that uses the threat of running to drive efficiency, without the drawback of actually doing it more often than necessary